They were the most lethal terrorist attacks in history, taking the lives of nearly 3,000 Americans and international citizens and ultimately leading to far-reaching changes in anti-terror approaches and operations in the U.S. and around the globe.

Our investigation of the attacks of 9/11—code-named “PENTTBOM,” short for Pennsylvania, Pentagon, and Twin Towers Bombing—was our largest case ever. At its peak, more than half our agents worked to identify the hijackers and their sponsors and, with other agencies, to head off any possible future attacks. We followed more than half-a-million investigative leads, including several hundred thousand tips from the public. The attack and crash sites also represented the largest crime scenes in FBI history.

The events of 9/11 are forever etched in the minds of anyone old enough to remember the day. Those who were on the East Coast recall that it was a brilliant, clear morning. Then, at 8:46 a.m., American Airlines Flight 11 crashed into the North Tower of the World Trade Center in New York City.

In a meticulously planned attack, terrorists hijacked four airliners. They flew three of the planes into buildings: the twin towers of the World Trade Center in New York and the Pentagon in Arlington, Virginia. They crashed the fourth plane in rural Pennsylvania. The attacks killed 2,976 people and injured thousands more. Today, many first responders are still dealing with adverse health effects from working in toxic conditions.

Immediately after the attacks, the FBI’s top job was to identify the attackers and prevent another incident. Experts in terrorism, evidence collection, and other specialties worked feverishly to determine what had happened and who was responsible.

The FBI also coordinated with its partners in law enforcement and the intelligence community domestically and abroad as it launched its most ambitious investigation ever.

Within minutes, officials at FBI Headquarters in Washington, D.C., activated the Strategic Information and Operations Center. By the end of the day, the FBI had established command posts for each of the three crash sites.

Thousands of agents interviewed witnesses and sources. They tracked down clues and tips worldwide to determine what had happened, who did it, and how future acts could be prevented. The FBI started identifying the 19 terrorists within hours.

Then-FBI Director Robert S. Mueller, III broke with routine and based the massive investigation out of FBI Headquarters instead of a field office. The PENTTBOM Team coordinated the investigation out of a basement office, where dozens of agents would build a case against those responsible.

The case, which remains open, revealed extraordinary acts of courage and selflessness among the spectrum of responders. And it forever changed the way the FBI works with law enforcement and intelligence community partners to keep Americans safe in the U.S. and abroad. 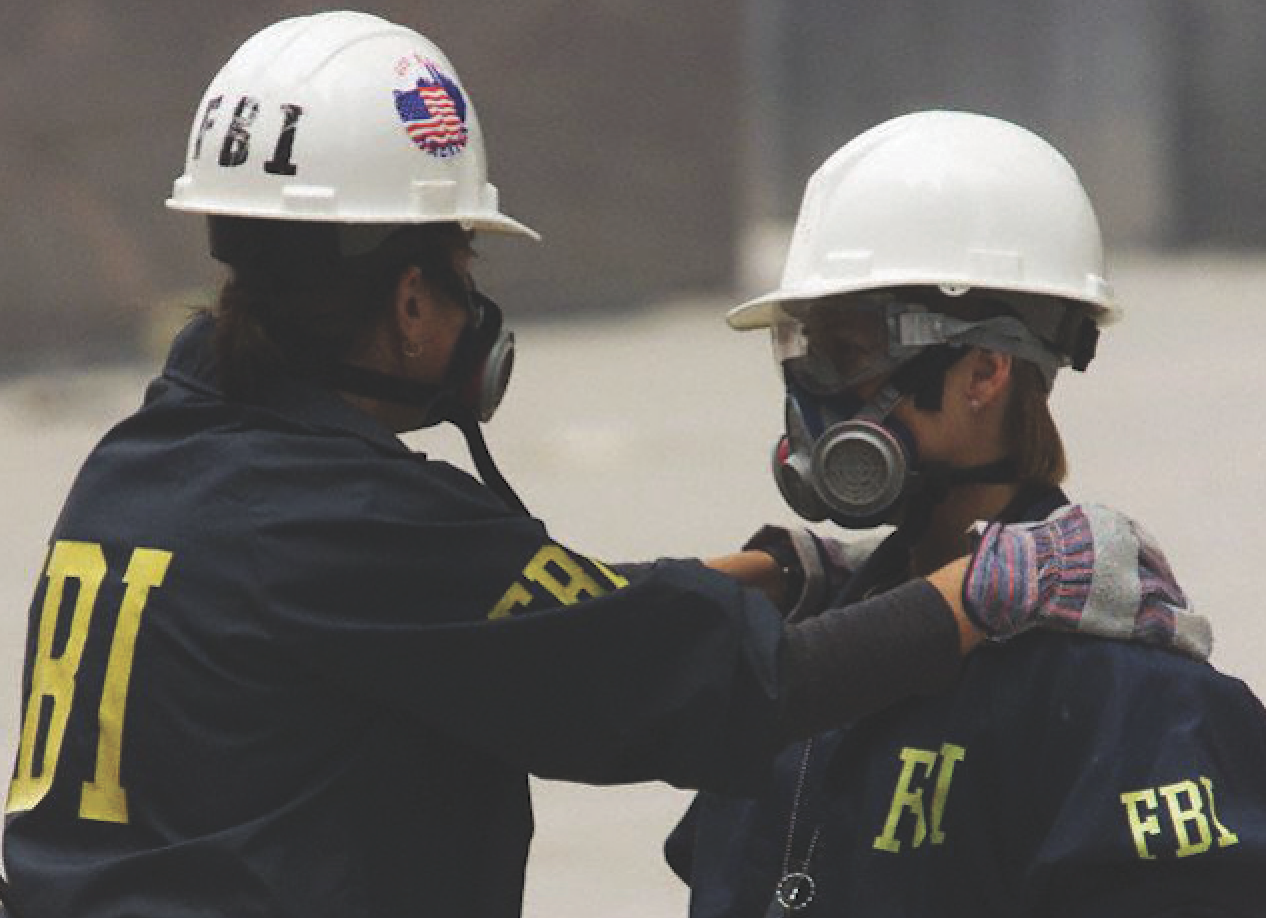 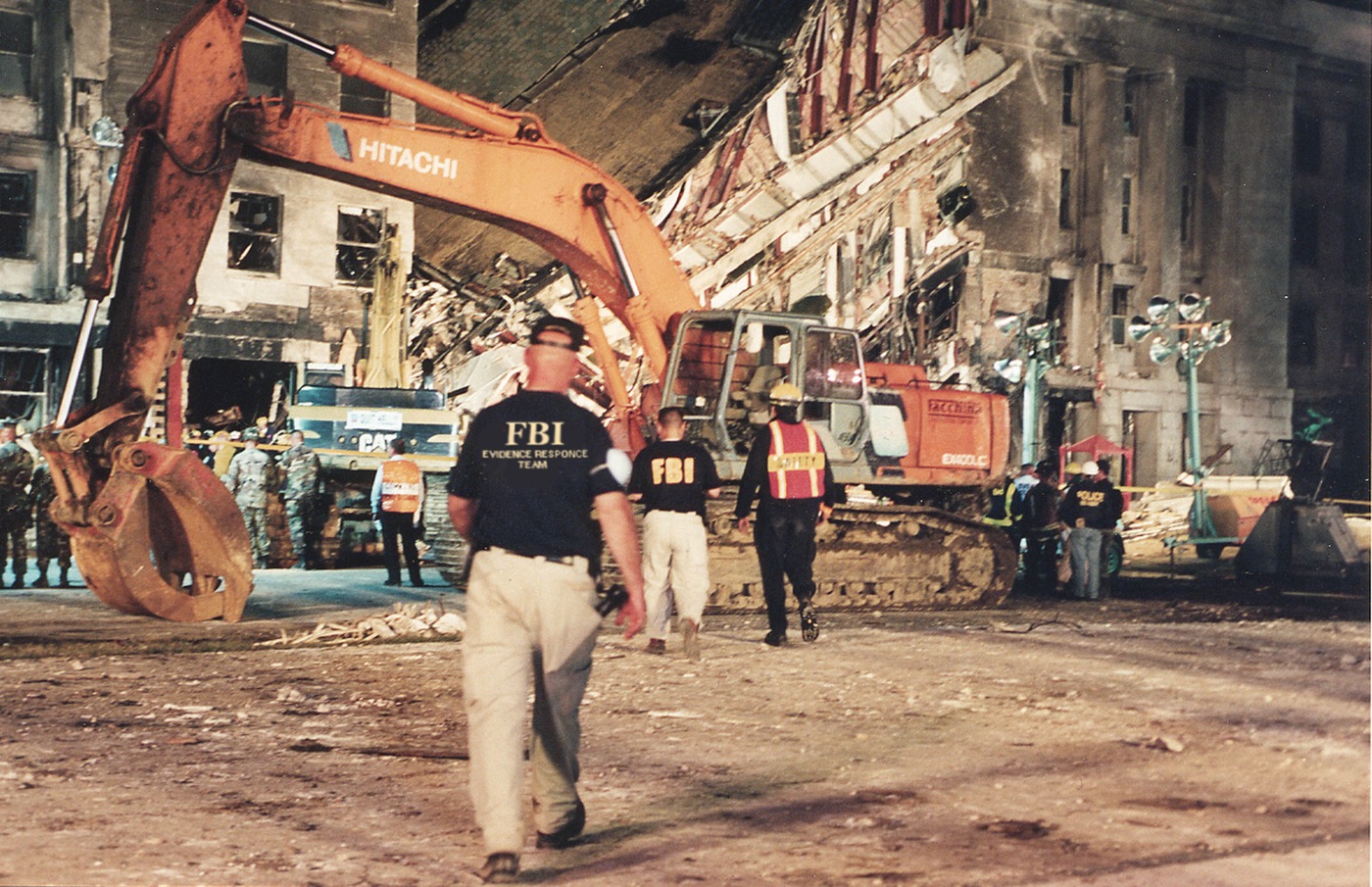 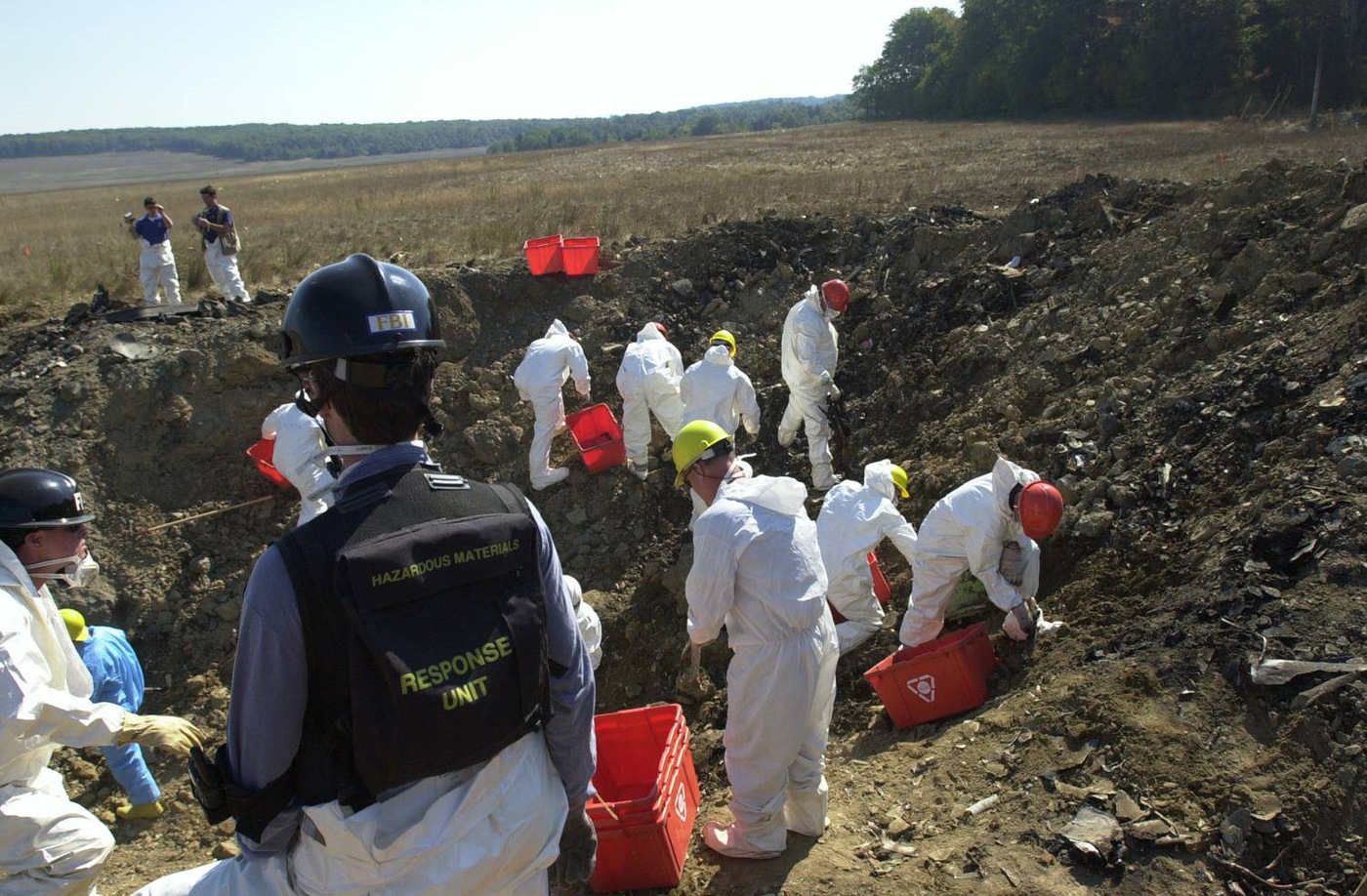 Recovery efforts at site of Flight 93 crash in Shanksville, Pennsylvania. 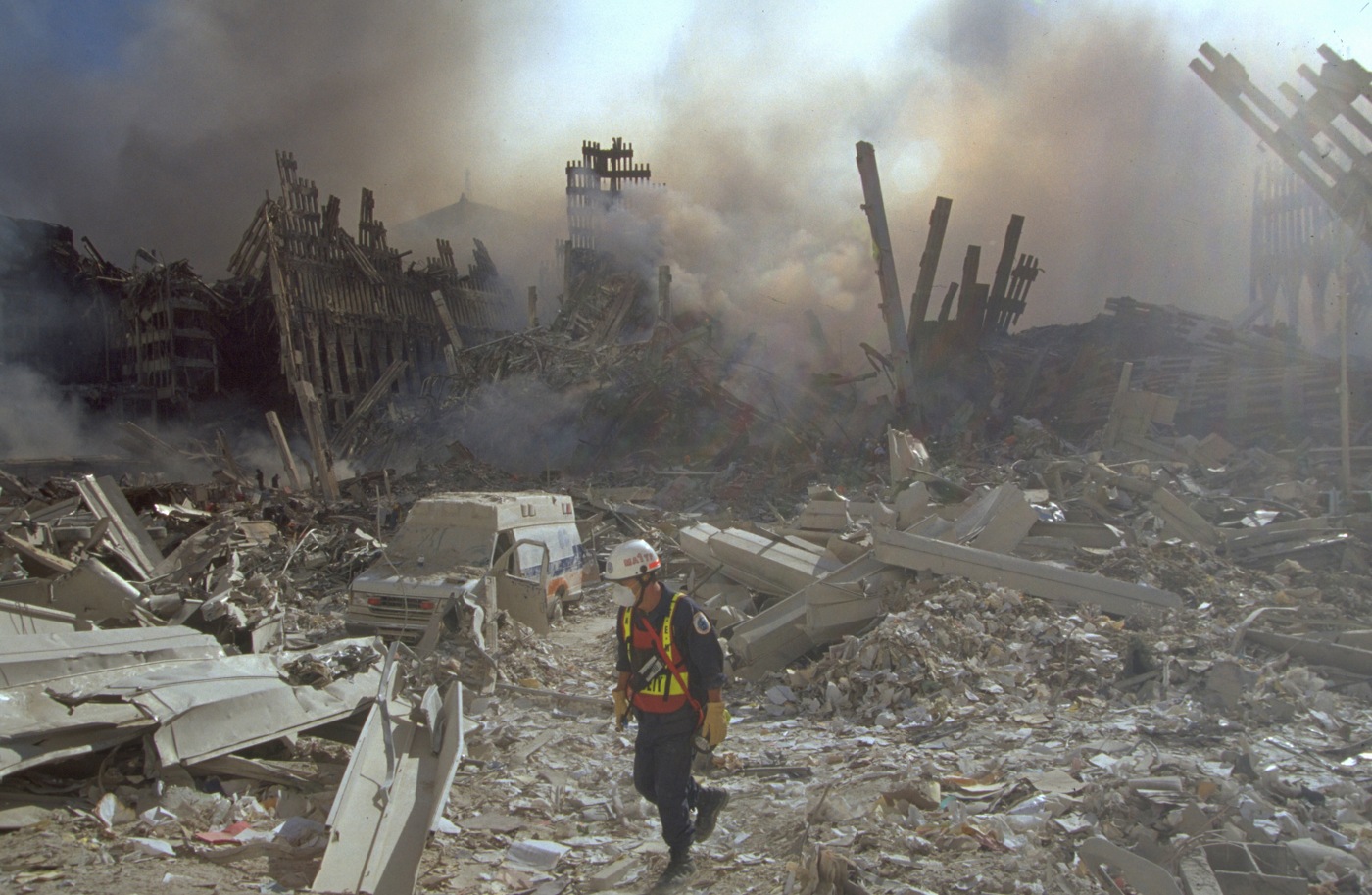 More than 4,000 special agents and 3,000 professional employees helped in the recovery and subsequent investigation of the 9/11 attacks, which challenged the FBI to deploy its assets efficiently and in innovative ways. All FBI Headquarters divisions, field offices, and nearly every unit at the FBI Laboratory contributed. Among the efforts:

The 19 men who hijacked and crashed the four planes were all trained by al Qaeda. Three of the suspected pilots—Mohamed Atta, Marwan Al-Shehhi, and Ziad Jarrah—were part of an al Qaeda cell based in Hamburg, Germany. All four pilots took flying lessons in the United States.

Fifteen of the hijackers came from Saudi Arabia, two from the United Arab Emirates, one from Egypt, and one from Lebanon. The oldest was 33; the rest were between 20 and 29. The group also included two sets of brothers: Wail and Waleed Al-Shehri on American Flight 11, and Nawaf and Salem Al-Hazmi on American Flight 77.

The hijackers began entering the United States in January 2000 to advance the plot. All 19 were in the country by early July 2001.

The Flights: A Timeline 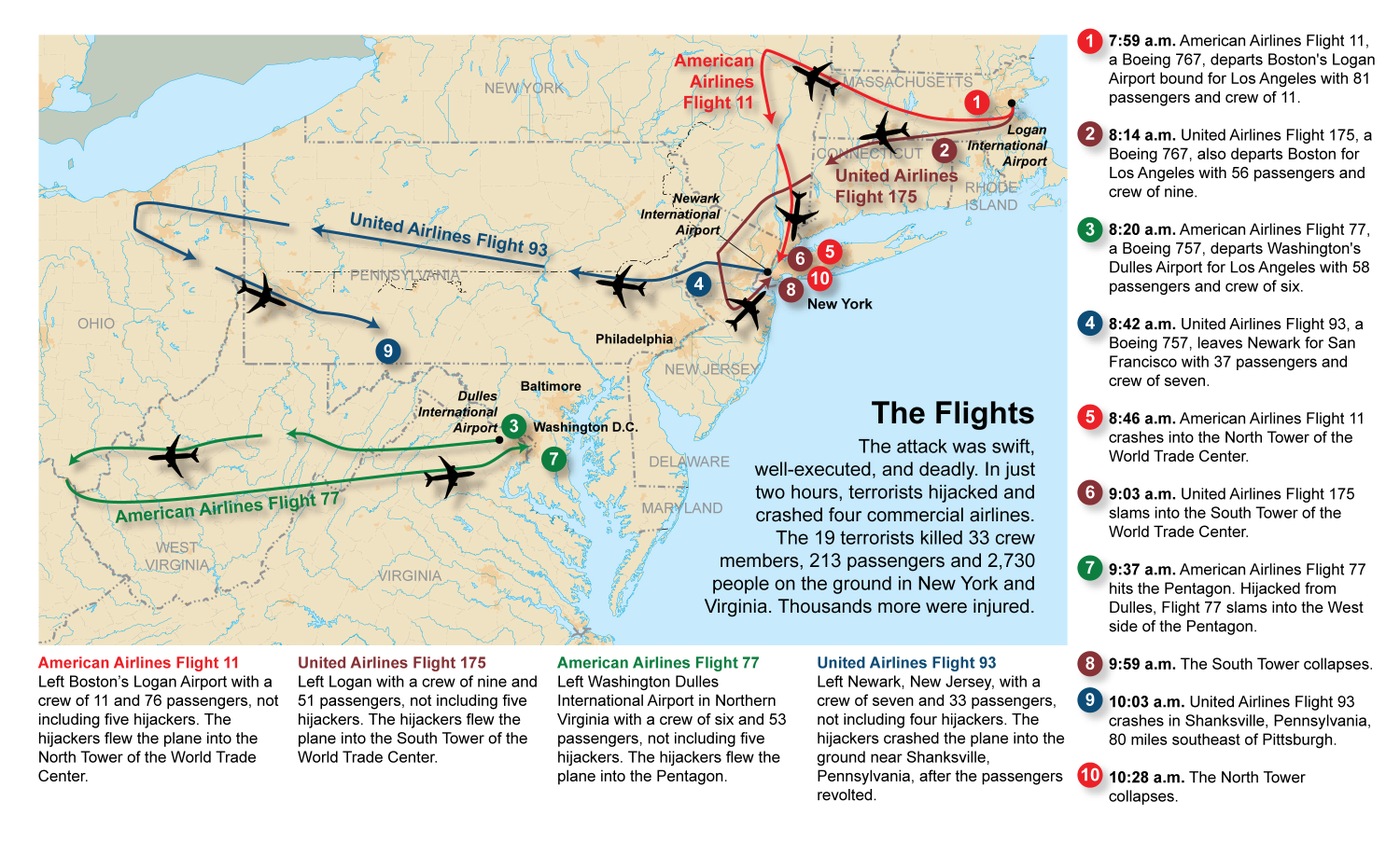 Nearly 3,000 people died on 9/11. A 2-year-old girl on Flight 175 died with her parents on their way to Disneyland. An 85-year-old man on Flight 11 died alongside his wife on their way to her son’s wedding. Eight children died, including three 11-year-olds on Flight 77 taking a school trip. Three college students died on Flight 93.

Today, FBI Director Wray requires new special agents and intelligence analysts to visit the National September 11 Memorial & Museum to remind them of their role to protect the American people and to remember the sacrifices of their brothers and sisters who rose to the occasion and responded on 9/11.

“When you have tough days—and I guarantee you, you will have tough days—remember this day and let it bring you back to the core of your job,” Wray tells new agents and analysts. “The stakes of the work we do. The people we do the work with. The people we do the work for. If you always keep those things front and center you’ll have an incredibly rewarding career at the Bureau and you’ll leave the organization even better than when you found it. And our country will be better for it, too.”

Remembering 9/11: In Their Own Words

Special agents who worked on investigations and recovery efforts in New York City, at the Pentagon, and in Shanksville, Pennsylvania, recalled their experiences in interviews conducted in the decade after the 9/11 attacks.