On a hillside compound just outside Kabul, the Afghan general who leads a new criminal task force is explaining the history of modern policing in his country. Under Soviet rule, he said, the Russians instituted and enforced their own laws. Later, “the Taliban took over and destroyed all of our police force. So our current force is completely new, created from zero, and we have some challenges.”

That’s why a little more than a year ago we established the Major Crimes Task Force (MCTF), to build Afghan law enforcement capacity through FBI-led training and mentoring.

“We help the Afghans with high-level investigations in corruption, kidnapping, and organized crime,” said Special Agent Jason Fickett, an assistant legal attaché in Kabul who oversees the MCTF—the largest international task force the FBI has ever operated.

“Prior to us coming here,” Fickett said, “one of the biggest challenges the Afghans had is they didn’t have the knowledge—the toolkit, so to speak—on how to go about investigating organized crime or putting together comprehensive cases on major players here in the Afghan theater.”

That is quickly changing. “Our FBI mentors are working side by side with us inside the task force,” said the Afghan colonel who leads the kidnapping unit. Through an interpreter at the MCTF headquarters, housed in a former Russian bunker, he explained, “They share their expertise. They show us new techniques of investigation—putting people under surveillance, how to use wiretaps, how to make arrests. We are very successful because of our mentors.” (See sidebar.) 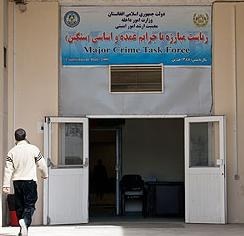 Kidnapping for profit is a relatively new phenomenon in Afghanistan, and it was becoming a serious problem in Kabul until the Major Crimes Task Force came along. Since last April, the MCTF has arrested several kidnapping groups and significantly reduced the threat in the capital city.

“Because kidnapping is new here, we didn’t have a lot of experience in this area,” said the Afghan colonel in charge of the MCTF’s kidnapping unit. “Our FBI mentors showed us how to handle these cases.”

Our agents helped the unit set up two squads—one reactive, to investigate kidnappings after the fact, and one proactive, to develop sources and intelligence to help dismantle the organized groups behind the abductions.

Developing that network of sources has paid other dividends as well. Recently a source tipped the unit about a vehicle freshly painted to look like a taxi. When officers located and searched the vehicle, they found 9,000 rounds of stolen ammunition—bullets intended for the insurgency that would have been used against U.S. and Afghan forces.

“Our agents are mentors in the truest sense of the word,” said Fickett. “They don’t conduct surveillance or go on arrests. Their role is strictly to teach and to train. He added, “This is the Afghans’ task force. The best way for them to learn is to have them do everything.”

The FBI has approximately 15 agents working at the MCTF, but the task force is also represented by veteran law enforcement officers from other U.S. agencies including the Army’s Criminal Investigation Division, as well as from Great Britain, France, Canada, and Australia.

In all, about 40 international mentors support nearly 170 Afghans on the task force. All the Afghans—who go through a vetting process before joining the MCTF, which includes a polygraph test—receive basic law enforcement training, and many have taken additional courses at the FBI’s training facility in Quantico, Virginia.

Since the MCTF was formally established in January 2010—with funding from the U.S. Department of Defense—nearly 150 cases have been initiated, “and we’ve had a number of significant arrests,” Fickett said. “Everything is done according to Afghan law.”

“There are challenges,” he acknowledged. “It hasn’t all been perfect. The government of Afghanistan is trying to work through the rule of law process. And the acceptance of good governance, transparency, and accountability among its public officials is not something that the government is used to.”

But good governance is a primary U.S. mission in Afghanistan, and the Bureau’s capacity-building efforts through the MCTF are helping to further promote the rule of law and accountability of public officials.

“When you have that accountability,” Fickett said, “the safer people feel and the more supportive they’re going to be of the government. And the more stable this government is, the better our relationship is going to be with it for many years to come.”

Part 3 in our series looks at how we investigate U.S organizations suspected of corruption.

Part 1 in our series on the FBI's role on the front lines of the fight against terrorism.