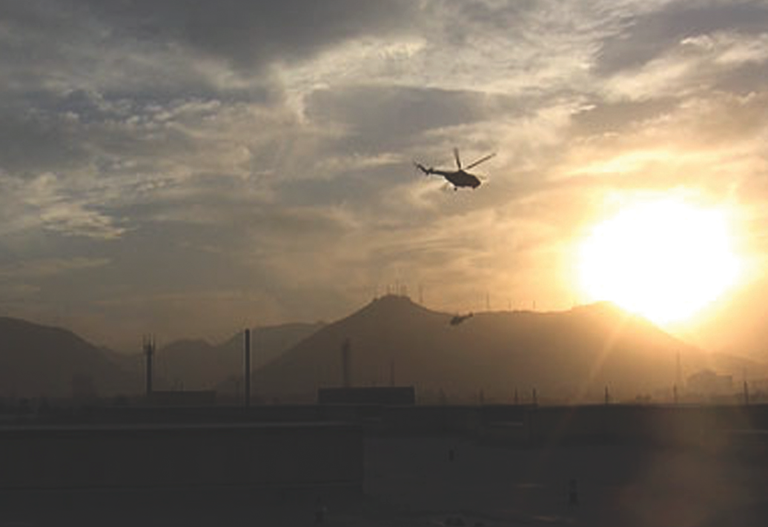 The FBI mission in Afghanistan—and elsewhere around the world—includes protecting U.S. interests
abroad from criminal threats as well as those related to terrorism.

From the roof of the U.S. Embassy in Kabul, Legal Attaché Bob Jones surveyed a city ravaged by decades of war and reflected on the FBI’s role on the front lines in the fight against terrorism.

“The biggest thing we do here is protect the homeland from afar,” said Jones, who recently completed a 15-month assignment as the FBI’s senior official in Afghanistan.

U.S. Ambassador to Afghanistan Karl Eikenberry amplified Jones’ comments. “The FBI is the shield in the United States,” he said. “But what 9/11 taught us is that you can’t defend the country against terrorism from the U.S. shoreline. You must extend the shield globally and integrate it with other international crime-fighting and counterterrorist organizations. The FBI,” he added, “plays a unique and important role in the combined approach that we use on the ground in Afghanistan.”

Counterterrorism may be the Bureau’s most important responsibility in the war zone, but it is not our only responsibility. The mission in Afghanistan—and elsewhere around the world—includes protecting U.S. interests abroad from criminal threats well as those related to terrorism. To accomplish this, Legat Kabul prioritizes several key areas of operations: information sharing, specialized investigations, and a small but influential role in capacity building.

“Capacity building is essentially helping the Afghans build their law enforcement expertise,” Jones said. “They’ve already got a robust investigative capacity inside the Ministry of Interior and the National Directorate of Security. But through the Major Crimes Task Force and other Bureau initiatives, we can help make them better.”

Some of those other capacity-building initiatives include assisting the Afghans with their expanding biometrics program and providing law enforcement leadership training, both on the ground in Afghanistan and at our training facility in the U.S.

Collecting information and intelligence—another critical priority—has always been a hallmark of the FBI, Jones said, “and since 9/11, we have expanded that ability. Today, we are a true partner in the inter-agency community when it comes to collecting, processing, and sharing intelligence. That intelligence-driven approach,” he added, “helps save lives.”

“Afghanistan is a tough environment to operate in,” Jones said. “It’s an active war zone with an active insurgency, and that brings a particular set of challenges.”

To help manage those challenges, FBI Director Robert S. Mueller created the International Fusion Cell (IFC) in 2008 within our International Operations Division to provide support and guidance to FBI operations in Iraq and Afghanistan. The IFC, largely staffed by Bureau personnel who are veterans of multiple war zone deployments, provides oversight and leadership to Legat Kabul.

Jones and others believe the hard-won skills gained in Afghanistan—along with our previous experience in Iraq and other international locations—will pay dividends when we respond to future war zones.

“The IFC has created an excellent model for legat operations in conflict zones,” said recently retired Special Agent Ed Montooth, who managed the fusion cell. “The processes we have developed based on our experiences and lessons learned in Iraq and Afghanistan will make us much more effective going forward,” he added.

“Whether it’s Afghanistan or elsewhere,” Montooth explained, “we now have a successful and tested model—both at FBI Headquarters and in the legats—to address these unconventional situations that have significant national security implications.”

Our series looks at the FBI's early role and the birth of our legal attaché in Kabul.