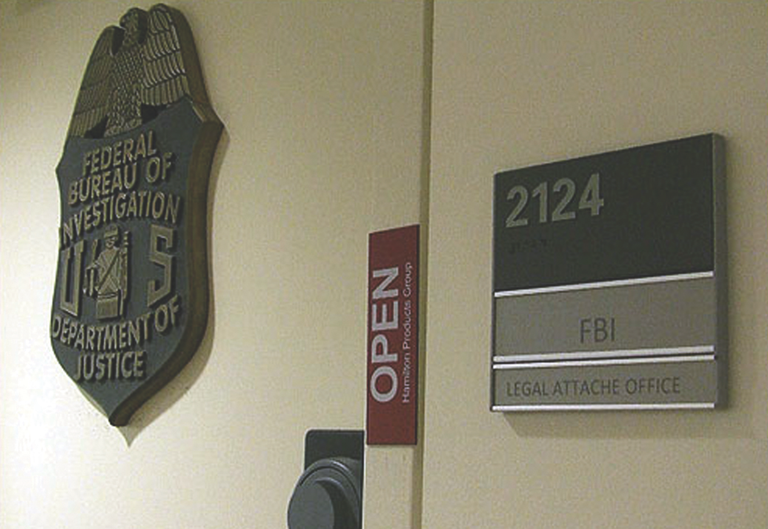 At the U.S. Embassy in Kabul, FBI intelligence analysts work in a space dubbed "the bullpen."

Intelligence analyst Courtney C. had been in Afghanistan only a few days when she saw firsthand the value of her work in the war zone.

“We got a report from the military that a person of interest had been picked up in one of the provinces,” said Courtney, who joined the Bureau five years ago. Information was needed about the individual’s possible connection to terrorist activity, but the only thing to go on was a passport number and a few personal items he had with him. 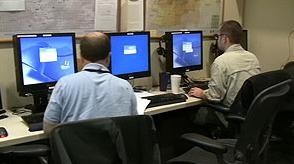 Right: (FBI analysts in Kabul generally work 120-day assignments.) In a matter of hours, using law enforcement and military records and additional resources, she and others were able to collect and analyze a range of information and provide investigators with a more complete picture of the man’s identity—including a pattern of what seemed to be suspicious activity related to the movement of money.

Gathering and analyzing information—whether about a terrorist threat or a criminal enterprise—is exactly what intelligence analysts do every day across the FBI’s many investigative programs. But in the war zone, there is often a greater sense of urgency because lives can hang in the balance.

“Everything’s a lot more immediate here,” said Courtney, who is based in one of our Midwest offices but recently began a four-month assignment in Kabul. “You need to push things out a lot quicker, because there are real-time implications if you don’t.” The timely dissemination of intelligence, for example, can have an immediate impact on the safety of troops on the ground.

The FBI’s top investigative priority is to protect the homeland from terrorist attack. The ability to collect intelligence in the war zone—in a cooperative effort with our U.S., Afghan, and other international partners—is critical for our domestic security as well as keeping our people on the front lines safe. Intelligence analysts play a critical part in that process.

“We are information brokers,” Courtney said. “Our role is to take information and give it context. The intelligence we gather from a variety of sources is pushed out to investigators in the field and to our partners, where it can be integrated into operations.”

In Afghanistan, just like at home, intelligence comes from many places—open sources like newspapers and the Internet, military and law enforcement databases, and citizens providing tips, to name a few.

When it comes to counterterrorism matters, the cycle of collecting, analyzing, and sharing intelligence is intensified and compressed. “In the war zone, we are at the razor’s edge of knowledge creation as it relates to a lot of terror threats,” Courtney said. “Information we collect here today could save lives on the front lines and at home. Knowing that makes everyone work that much harder.”

Beyond the intense pace—“No two days are the same here,” she said—there is also the satisfaction of working with a dedicated group of people who care deeply about the FBI’s mission in the war zone.

“Most of us are here for four months,” she explained. “It’s 120 days to make a difference and to contribute. I see it as a once-in-a-lifetime opportunity.”

Reputed boss and leaders of a Philadelphia crime family charged with racketeering, extortion.