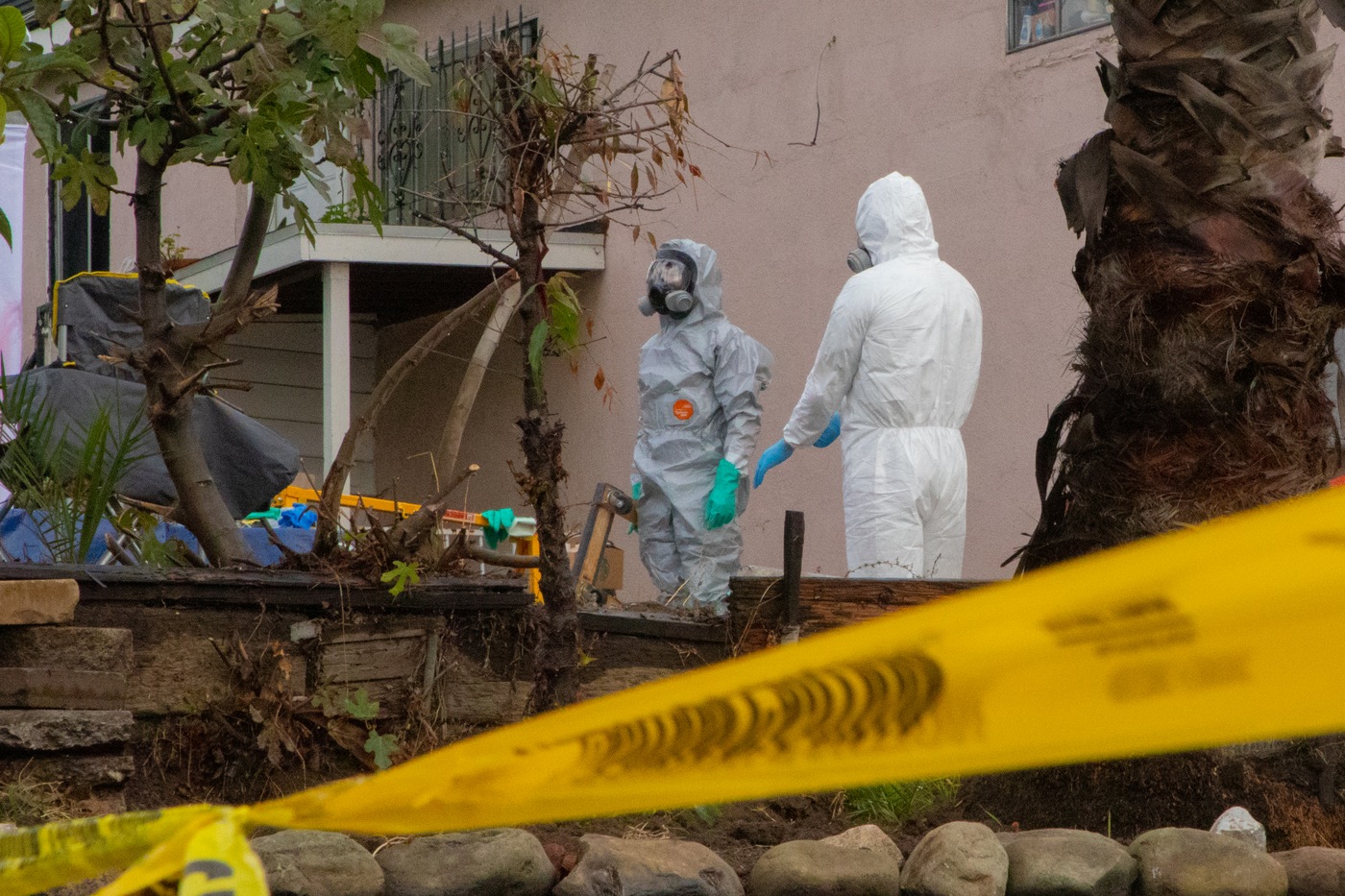 The basement location where pill presses were churning out thousands of fake pills had to be sealed off and processed by the DEA's Clandestine Laboratory Team. Even trace amounts of fentanyl can be dangerous.

The user will think they’re taking a Percocet or Adderall that they purchased from a social media contact or a local dealer—or maybe it was handed to them by a friend.

But the pill is far more likely to be something manufactured in a location like the one agents from the Drug Enforcement Administration (DEA) and FBI recently uncovered in an Inglewood, California, basement.

There, giant pill presses spit out thousands of convincing counterfeit drugs. A video of the presses in action shows the drugs are being created in what is far from a quality-controlled setting. Powder flies everywhere as the pills drop into plastic five-gallon buckets. Because the pills contain powerful drugs like methamphetamine and the synthetic opioid fentanyl, it's immediately apparent why these drugs are so dangerous. 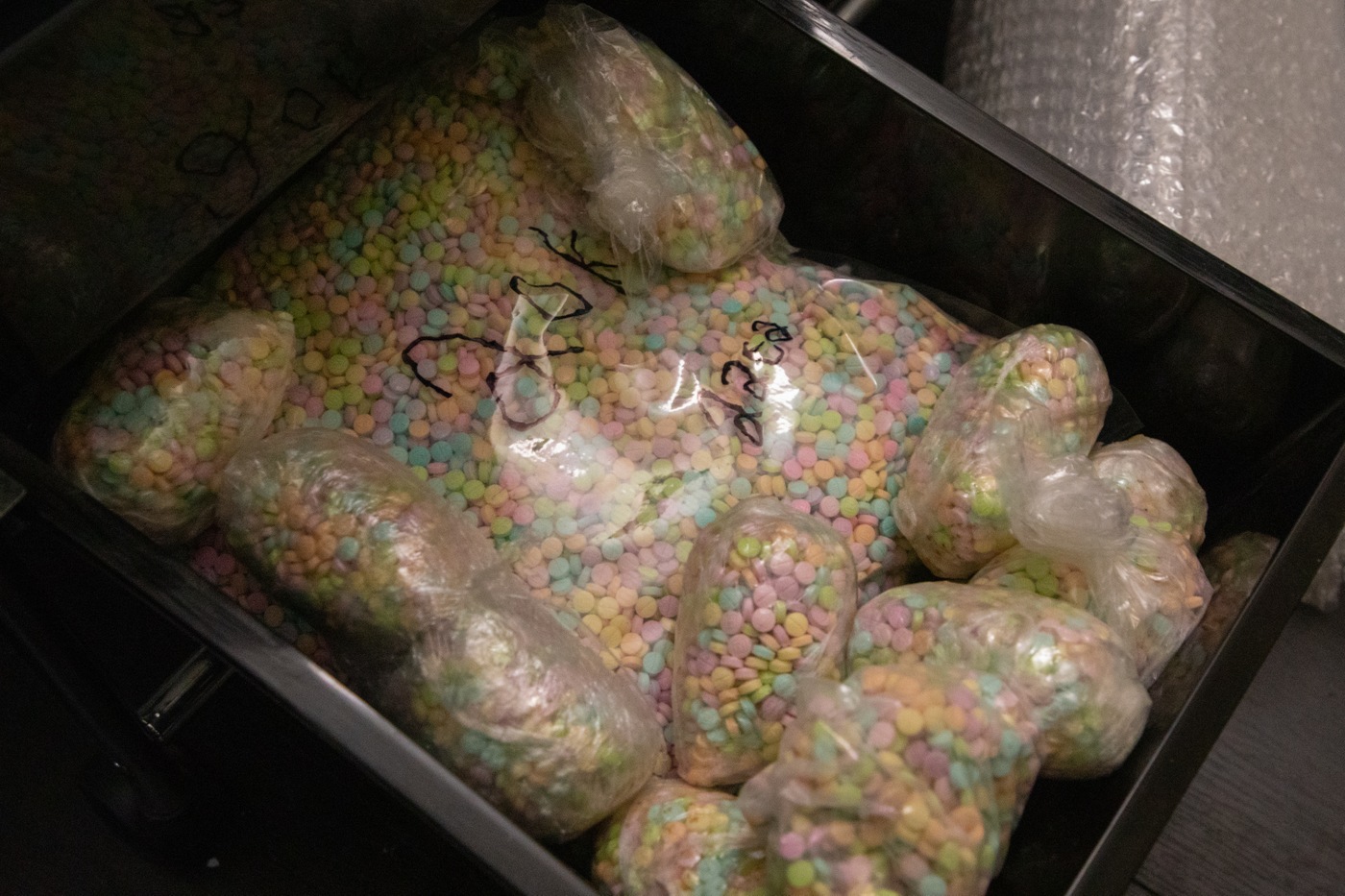 Investigators found thousands of these rainbow-colored pills in the search.

According to the DEA, two milligrams of fentanyl is a potentially lethal dose. Two milligrams looks like a few grains of salt.

Because of the largely erratic production methods in these pill press operations, the amount of the powerful drug will vary from pill to pill.

These differences can mean life or death for the user. “These people are not sitting there measuring the amount of fentanyl in each pill,” said FBI Special Agent Tiana Kostic, who led the investigation as part of a team out of the FBI’s Los Angeles Field Office. “One pill may not kill someone, but the next one might.”

She said that on the online marketplaces in which these drugs are sold, they may be described as “pressed” versions of prescription drugs, pressed Oxycontin for example. The more experienced buyers on illicit marketplaces may know what this means, but most users don’t, she said. “It is the less experienced user, someone buying through a local source, who thinks they are getting a prescription pill.”

Fake pills, like the ones manufactured in that basement, are one of the drivers of a growing and alarming number of overdose deaths in the United States. According to the U.S. Centers for Disease Control and Prevention, deaths caused by synthetic opioids like fentanyl increased to 71,238 in 2021, up from an already staggering 57,834 in 2020. Deaths linked to methamphetamine use are also on the rise.

Several students within the Los Angeles Unified School District have died from fentanyl poisoning since the beginning of the school year. Many of those victims are believed to have consumed drugs they thought were pharmaceuticals.

A Los Angeles-based DEA special agent who investigated this case said she also investigates overdose deaths—and, recently, a lot of overdose deaths among young people. “What I’m seeing is the kids are taking the one blue pill or even half of the blue pill, and it’s an instant overdose,” she said.

“These people are not sitting there measuring the amount of fentanyl in each pill.” 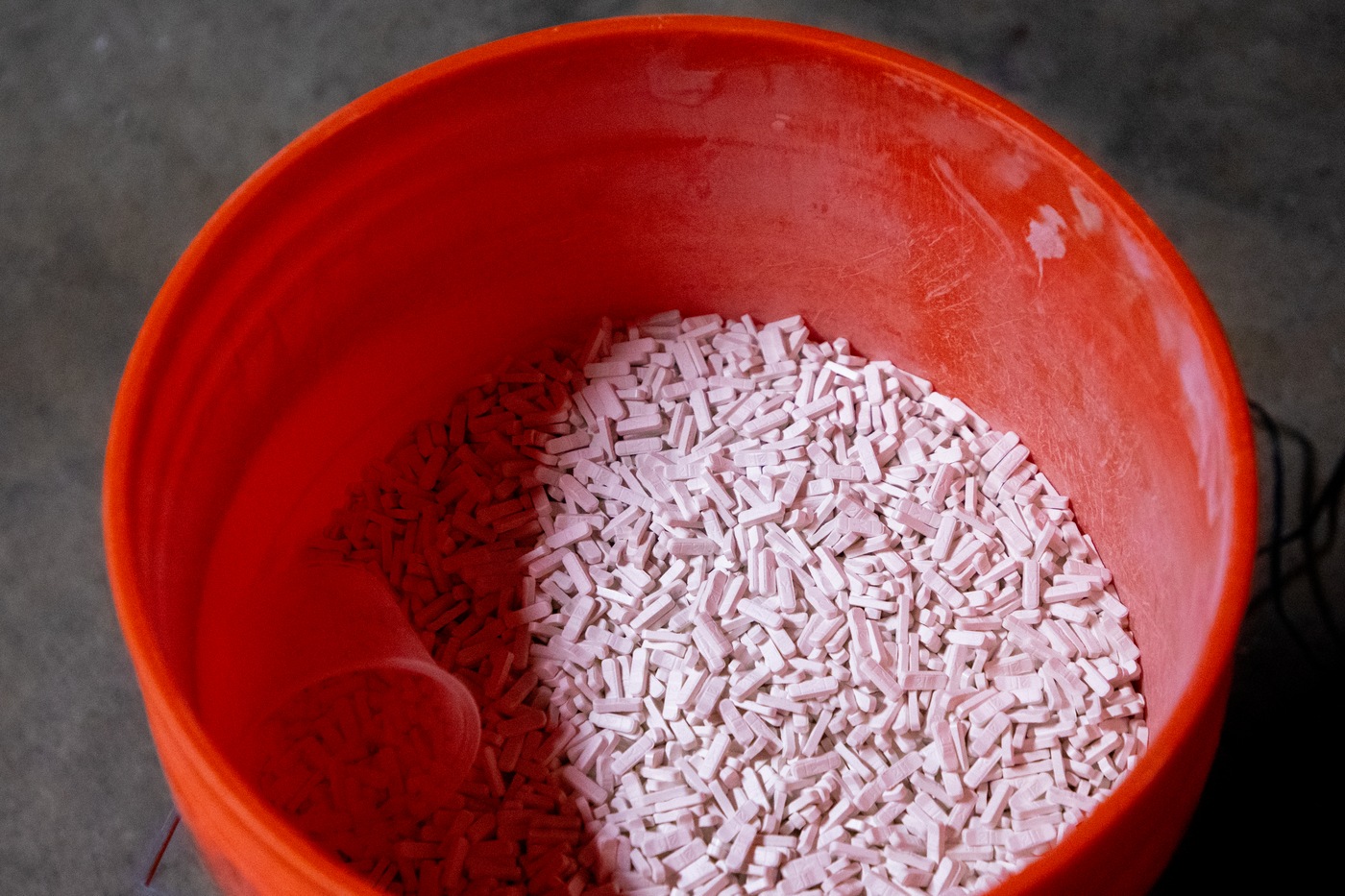 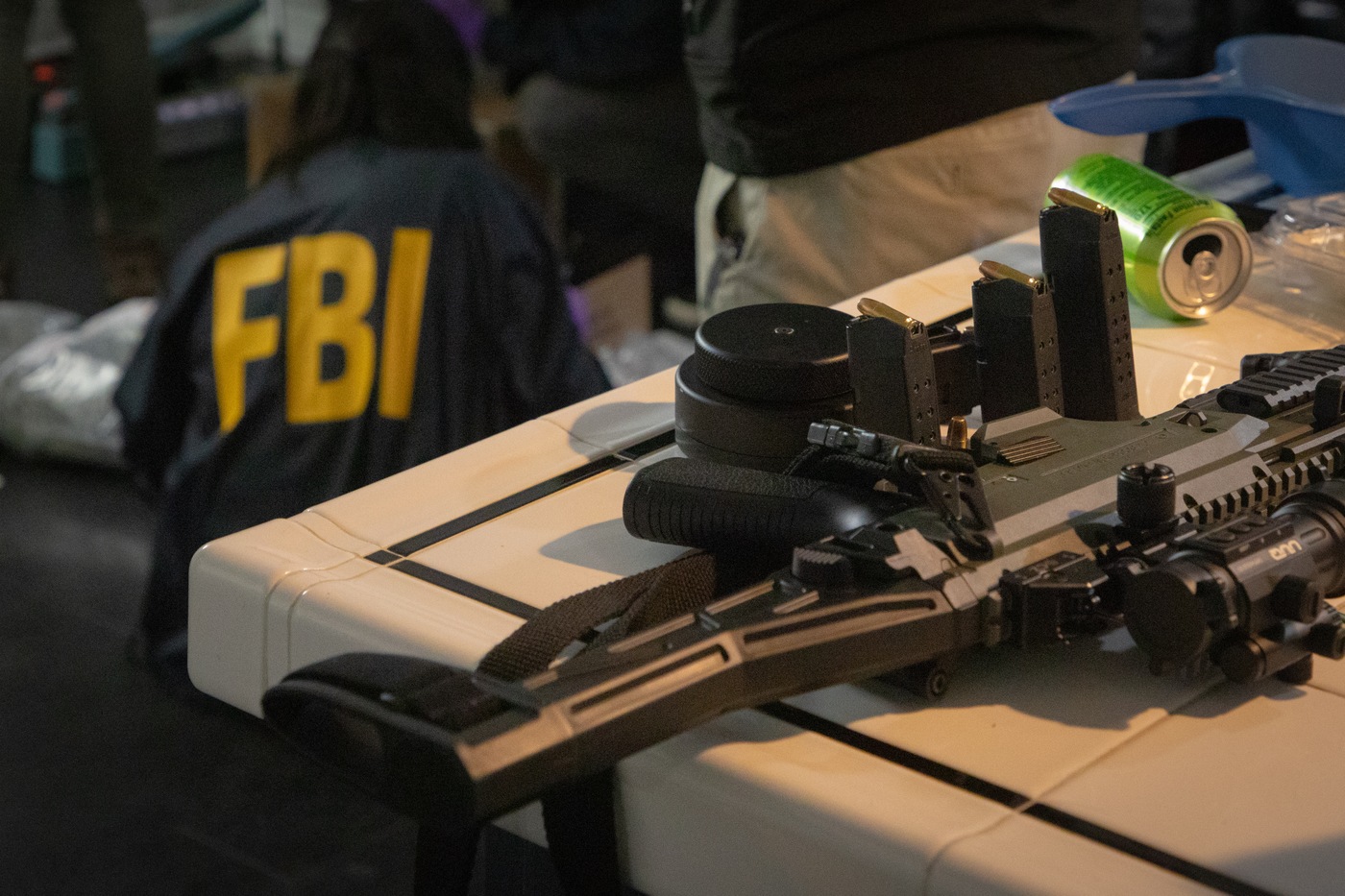 Two Investigations Focus in on One Prolific Dealer

The DEA case agent began investigating the individual behind the massive pill-making operation in Inglewood, California, when U.S. Customs and Border Protection intercepted a die-cast piece being shipped to Los Angeles from abroad. This particular piece was created to print pressed pills with the same markings as the brand-name drug Adderall.

The pill presses and parts are legal to own, the DEA special agent said, but they're illegal to use for drug-trafficking purposes. This suspect had die pieces for a number of brand name drugs, nearly 50 in total.

“He could change up the press so it could mark them as Adderall or Xanax or with anything a legitimate drug might have,” the case agent said.

As she investigated the person who ordered that die piece, she learned that FBI Special Agent Kostic was pursuing the same individual, whom the FBI team had identified as a major online drug dealer, selling on both darknet and clearnet sites. Darknet sites require a specialized browser called Tor to view. Clearnet sites are available on any connected device.

Their joint work, and months of investigative efforts by FBI, DEA, U.S. Postal Inspection Service, and Homeland Security Investigation teams, eventually led to six search warrants being carried out on the same early November morning. Partnerships among agencies are crucial to the success of these complex investigations and were the primary reason the Department of Justice created the Joint Criminal and Opioid Darknet Enforcement (JCODE) Team in 2018.

Altogether, investigators found six pill presses; 10 weapons, including one that had been modified to function as an automatic weapon; bundles of cash; and approximately 450 pounds of illegal drugs, which included tens of thousands of pills, powdered fentanyl, marijuana, mushrooms, heroin, and other substances that still need to be identified.

Many of the pills were the so-called "rainbow pills" that investigators believe are created to market to young people. They are often sold on popular social media platforms.

While searching the location believed to be the primary suspect's residence, investigators also found packaging materials, heat sealers, and the computers and phones he used to run his active online business. One computer was left open.

“We were able to get a pretty comprehensive buyer list, which included approximately 2,200 unique buyer names for a total of over 4,000 sales,” said FBI Los Angeles Supervisory Special Agent Andrew Innocenti.

“We were able to get a pretty comprehensive buyer list, which included approximately 2,200 unique buyer names for a total of over 4,000 sales.” 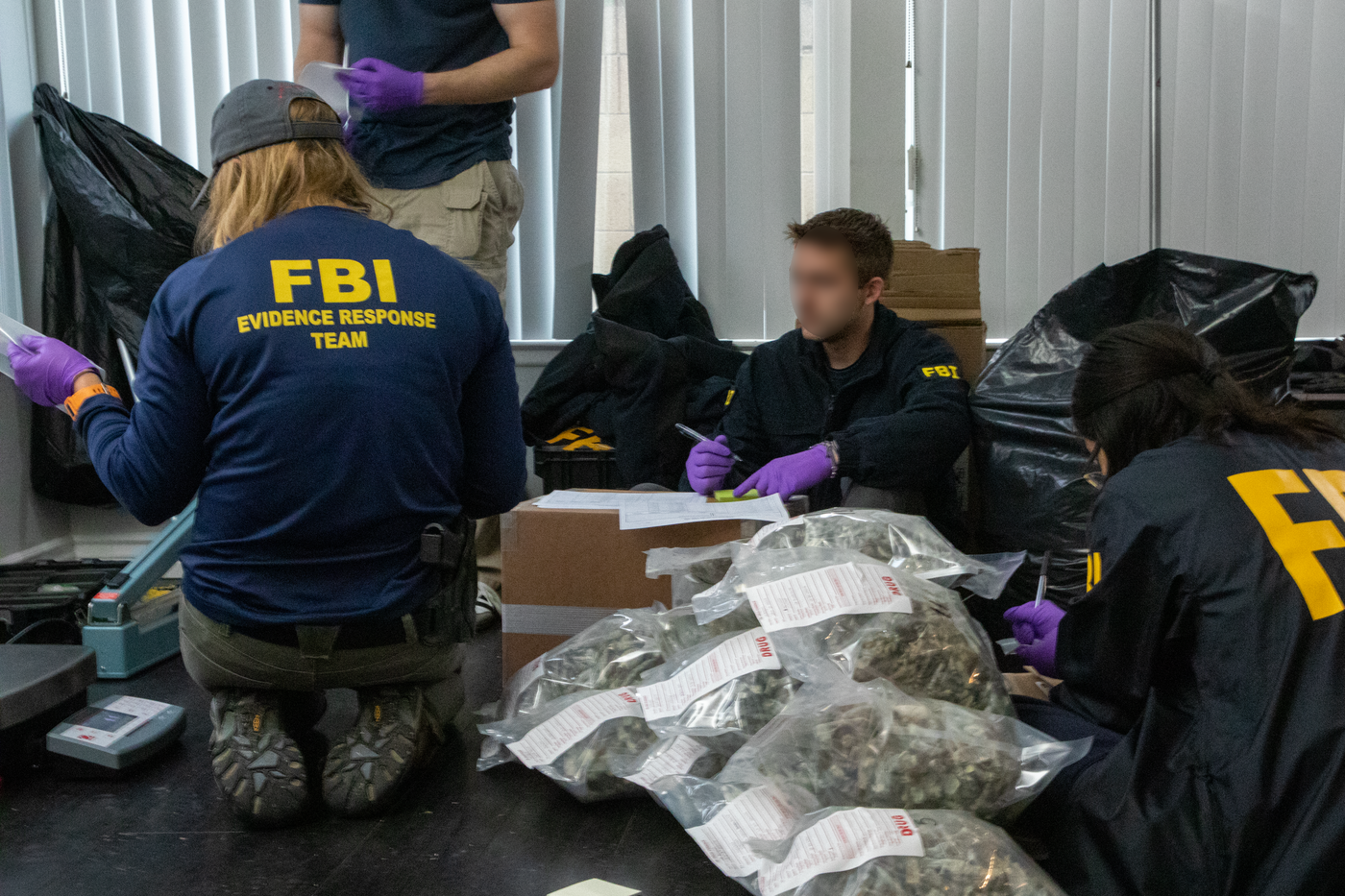 The FBI Evidence Response Team processes some of the hundreds of pounds of drugs seized in the investigation into a prolific darknet drug dealer.

Agents are now looking into those leads because many of the buyers were ordering large quantities of drugs, indicating that they may be reselling. They are also tracking down any deaths associated with the drug buys.

“We are actively investigating whether drugs supplied by this vendor resulted in any overdose deaths,” said Innocenti. “If you are shipping drugs in the mail, you should know you are responsible for the people who are dying from them.”

Nathan Cocklin, the head of the FBI Hi-Tech Organized Crime Unit and the Bureau's JCODE team lead, believes this to be the largest seizure of drugs from an online drug marketplace in the five-year history of the JCODE program by far.

The U.S. Attorney’s Office for the Central District of California, along with the federal and local law enforcement agencies, announced charges against the primary suspect in the case at a press conference today. Prosecutors expect to announce charges against additional subjects in the coming weeks and months.

The other goal of publicizing the case is to show the American public the source of this deadly drug supply so they better understand the risk. The DEA agent on the case also urged parents to have frank conversations with their children about the danger these pills present.

With more than 50 agencies in attendance, the class helped an 11-year-old from Pearland, Texas, get closer to his goal of being sworn in by 758 law enforcement agencies.

More than 40 Arrested in Violent Gang Takedown in Arkansas

The FBI, along with federal, state, and local partners, arrested 45 people for drug and firearm crimes last week in Pine Bluff and Little Rock, Arkansas.