Operation SaboTor, a multi-agency law enforcement action between January and March 2019 that targeted opioid sales on the Darknet, included this search of a vehicle and a residence in California. The search was the result of an eight-month investigation that led to five arrests.

When Knoxville first responders found a man dead in his home, there was clear evidence on the scene of the heroin that caused his overdose. Also nearby were clues to how the deadly drugs had reached him. Investigators found a padded manila envelope with postage and markings that provided them another link back to the online drug sellers who have proliferated on the Darknet in recent years.

Drug traffickers are increasingly using anonymous online networks to sell narcotics, including potent synthetic opioids like fentanyl, to buyers who can order and receive the drugs without ever leaving home. What can appear to be a regular e-commerce transaction is one of the delivery channels fueling a deadly nationwide epidemic. The Centers for Disease Control and Prevention reports that drug overdose deaths have been on an upward climb for several years, across the United States and across all demographic groups. In 2017 alone, 70,237 people in this country died of a drug overdose; two-thirds of those deaths involved an opioid.

As part of a government-wide effort to address the epidemic, the Department of Justice created the Joint Criminal Opioid and Darknet Enforcement (J-CODE) team in 2018 to leverage the power of federal and international partnerships to combat the complex and deadly threat of online drug sales.

Now in its second year, J-CODE is delivering results through coordinated efforts and the commitment of the nation’s law enforcement agencies to address opioid sales on the Darknet. Building on the success of last year’s Operation Disarray, the J-CODE team led Operation SaboTor between January and March of this year. These concentrated operations in the United States and abroad led to 61 arrests and shut down 50 Darknet accounts used for illegal activity. Agents executed 65 search warrants, seizing more than 299 kilograms of drugs, 51 firearms, and more than $7 million ($4.504 million in cryptocurrency, $2.485 million in cash, and $40,000 in gold).

“This is a new and evolving threat, and we found that no one agency can do it alone.”

J-CODE joins the efforts of the FBI with the Drug Enforcement Administration (DEA), United States Postal Inspection Service (USPIS), U.S. Immigration and Customs Enforcement Homeland Security Investigations (HSI), U.S. Customs and Border Protection (CBP), Department of Justice (DOJ), and the Department of Defense (DOD). As many of these markets cross borders, Europol is also an invaluable international partner in J-CODE’s efforts to make a global impact on Darknet drug trafficking.

“This is a new and evolving threat, and we found that no one agency can do it alone,” said FBI Special Agent Maggie Blanton of the Hi-Tech Organized Crime Unit at FBI Headquarters. “The FBI may get information from local law enforcement after an overdose or arrest. Through that tip, we can work with our federal partners with the Postal Inspection Service, because so often the drugs are moving through the mail. Our Customs and Border Protection partners are a great resource on understanding trends and preventing drugs from coming into the country from abroad, and our partnership with DEA is critical because of their experience and expertise with drug cases.”

The evidence gathered from that overdose death in Knoxville, for example, was shared with local law enforcement and then with USPIS, the FBI, and other partners. The eight-month investigation led to the arrest of five suspects in the Los Angeles area in March 2019 who are believed to be behind at least two online drug sites that shipped out an estimated 1,500 parcels each month. Search warrants carried out on a residence rented by the suspects and two of their vehicles uncovered drugs, a loaded gun, mailing supplies, computers, cell phones, and transaction receipts.

FBI Special Agent Nathan Cocklin said members of his Hi-Tech Organized Crime squad from the Los Angeles Field Office, along with USPIS inspectors, interviewed the suspects as they were brought into custody. He said the suspects claimed they were just running a business, making money, and not considering the impact of their online sales. “It’s a transaction only,” Cocklin said of the Darknet marketplaces. “They don’t even know each other’s real names.” He said the suspects never considered that a package dropped in a mailbox in Southern California could mean the loss of a life in eastern Tennessee. 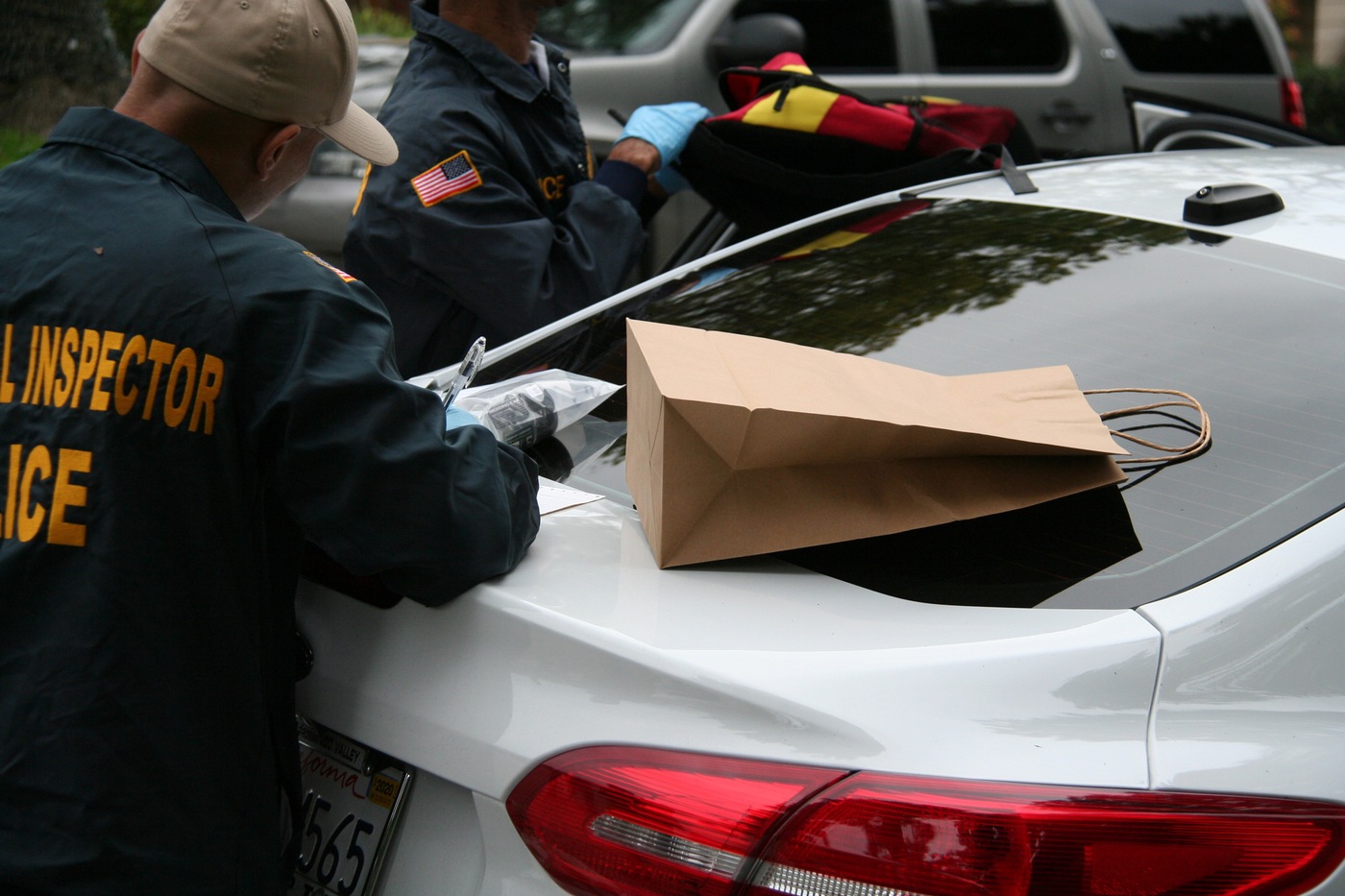 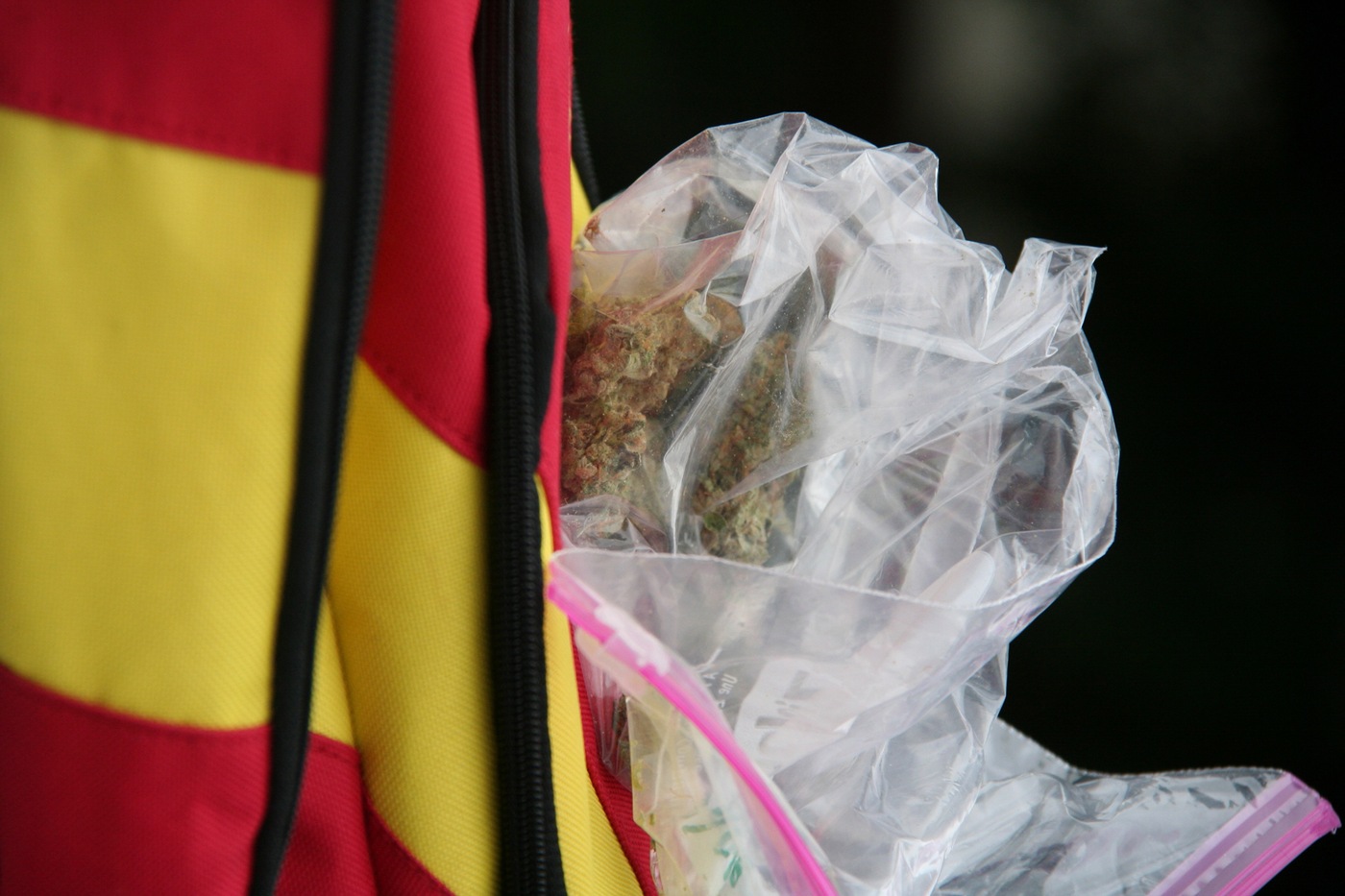 Members of the J-CODE team conduct a search of a residence and vehicle in California in March 2019, where drugs were among the items seized.

The Darknet is a part of the Internet accessed through a specialized browser called Tor. Tor allows users to better hide who they are, where they are, and what they are doing online. Darknet marketplaces offer illicit goods that range from hacked bank accounts and stolen credit card information to guns and drugs.

But on the other side of the seeming ease and anonymity of buying and selling on the Darknet is the hard work being done by law enforcement, in concert, to combat the illegal activity occurring online—from targeting the marketplaces and the sellers to reaching out to those buying illegal wares online.

“These are very complex and time-consuming cases for one agency,” said Kyle Rau, USPIS program manager for Darkweb investigations. “The ‘one government’ approach allows us to tap into each agency’s strength and allows each agency to focus on a particular task.”

The FBI and its law enforcement partners in the United States and abroad have had tremendous success in recent years taking down some of the largest and most profitable Darknet marketplaces. In 2017, law enforcement seized the AlphaBay marketplace, believed to be the largest Darknet market at the time. That seizure was followed by a takedown of Hansa market, another major player.

“It is harder to get the infrastructure up,” stressed Cocklin. “To compare it to a normal drug organization, a dealer is easier to replace than the head of the organization. If you take out a marketplace, you have to rebuild. It takes money and time and undermines trust. Did taking out AlphaBay and Hansa stop everything? No. Did it make an impact? Absolutely.”

The next-level target is the Darknet drug trafficking organizations. The goal of Operation Disarray and Operation SaboTor, along with the ongoing work of J-CODE partners, is to identify and arrest those behind the online sales.

“It takes work, but the FBI, USPIS, DEA, and others are laser-focused on tackling the opioid epidemic on the web.”

The final prong of the J-CODE effort is educating the public on the dangers of opioids by contacting individuals who are known to have purchased drugs online. Sometimes the message arrives too late. In locating and contacting buyers, the J-CODE team often comes across death notices and obituaries. In some cases, agents learn from buyers that they had survived an overdose; in other cases, agents learn from family members that a buyer did not. Oksala stressed that many of the drugs being sold online carry the added danger of unknown, powerful chemicals. “People are making thousands of pills at a time, doing the formulation without any scientific training,” he said.

The agents arrive with information on addiction and treatment, and their very presence challenges the anonymous nature of the Darknet. “If they know someone is looking, people lose faith in the marketplace,” said Rich Sheehan, USPIS assistant inspector in charge. “We’ve proven time and time again that they are not anonymous.”

”We are able to identify people,” said Cocklin. “It takes work, but the FBI, USPIS, DEA, and others are laser-focused on tackling the opioid epidemic on the web.”