SRS to NIBRS: The Path to Better UCR Data

The Path to Better UCR Data

Since 1930, the FBI’s Uniform Crime Reporting (UCR) Program has collected crime data through the Summary Reporting System (SRS), compiling and reporting total figures on key categories of crimes from participating law enforcement agencies. In a time before electronic computing, SRS was a paper-based system that profiled the picture of crime in America. Under SRS, law enforcement agencies collected data for seven major crimes that came to their attention; they also reported data for lesser offenses for persons charged. To simplify the reporting and tabulation of numbers, SRS features a hierarchy rule that ranks the crimes in order of severity and accepts the report of only the most severe crime within a criminal incident. For example, if a criminal incident includes a robbery and a murder, the hierarchy rule dictates that a law enforcement agency reports only the murder.

SRS has evolved over the decades to include electronic submission capability, more categories of crime data, and a few incident-based factors, but it is still very limited and outdated in its basic concept. The collection now includes 10 Part I crimes for offenses known and arrests, and 29 Part II crimes for which only arrest data are reported. (Read more in About UCR.) Because of the hierarchy rule, SRS does not reflect all the crimes that might have been committed in an incident. Also, because SRS collects little information about an incident beyond the initial crime committed, researchers cannot use it to answer many types of questions about the causes of crime. For example, SRS cannot answer how many kidnappings happen at schools or how many robbery victims are related to their robbers. These weaknesses of SRS limit its statistical value as a guide for well-informed public policy, meaningful public discussion, and strategic policing.

In contrast, the UCR Program’s National Incident-Based Reporting System (NIBRS) is a more comprehensive system of crime data collection and reporting. NIBRS collects incident and arrest data on 52 Group A offenses and arrest data only on 10 Group B offenses. The offenses include many that SRS omits, such as animal cruelty, extortion, and the fraud offense of identity theft. With no hierarchy rule, agencies may collect NIBRS data on as many as 10 criminal offenses per incident, yielding a more accurate accounting of the total number of reported crimes. In addition, NIBRS captures data on incident-related details that are not included in SRS, such as the relationships between victims and offenders, the types and quantities of drugs involved, and the types of property damaged or stolen. Finally, because NIBRS does not only aggregate the data (i.e., it can show component subtotals in addition to total figures), it can be used to answer detailed questions about crime, such as, “How many kidnappings happen at daycare facilities?”

To its credit, SRS served the nation’s law enforcement interests during the decades when a nationwide computer-based system was not feasible. However, technological developments in more recent decades have created the potential for much more sophisticated data collection and reporting systems, such as NIBRS. In turn, NIBRS offers the potential for a sharper, more detailed picture of crime in America. Though the number of NIBRS participants currently amounts to roughly one-third of the nation’s law enforcement agencies, that is about to change.

On December 3, 2015, the FBI’s Criminal Justice Information Services Advisory Policy Board, in cooperation with representatives of the International Association of Chiefs of Police, the National Sheriffs’ Association, the Major Cities Chiefs Association, the Major County Sheriffs’ Association, the Bureau of Justice Statistics, and the U.S. Department of Justice, resolved that the FBI should retire SRS within five years and collect UCR data only through NIBRS thereafter. On February 9, 2016, FBI Director James B. Comey approved the recommendation and announced that the FBI would retire SRS on January 1, 2021, and collect crime data only through NIBRS. (Note: All of the SRS archival data will remain available, but the national program will only process NIBRS data from that date forward.)

Director Comey’s announcement and his commitment to obtaining better, more complete data have spurred the national program to double down its efforts to get agencies to go NIBRS. These efforts include dedicating more staff and resources to liaise with agencies nationwide and to cease using resources to maintain both systems. Not only is the FBI encouraging those who submit their data via SRS to make the change, but it is also reaching out to those agencies that have been NIBRS-compliant for years to encourage them to upgrade their current incident-based systems to the new baseline before the deadline. Internally, the FBI is making its own upgrades to streamline data processing and to ensure the system can remain agile and process new data formats. In addition, the FBI is developing a platform for custom data outputs so users can determine the variables of their data searches. Ultimately, the FBI wants the statistics it collects through NIBRS to provide more meaningful, more useful data. And to do that, the FBI needs the commitment of all of its data contributors.

To help your agency get started in making the transition to NIBRS, contact your state agency, e-mail the FBI’s UCR Program at UCR-NIBRS@ic.fbi.gov, or call the NIBRS staff line at (304) 625-9999. 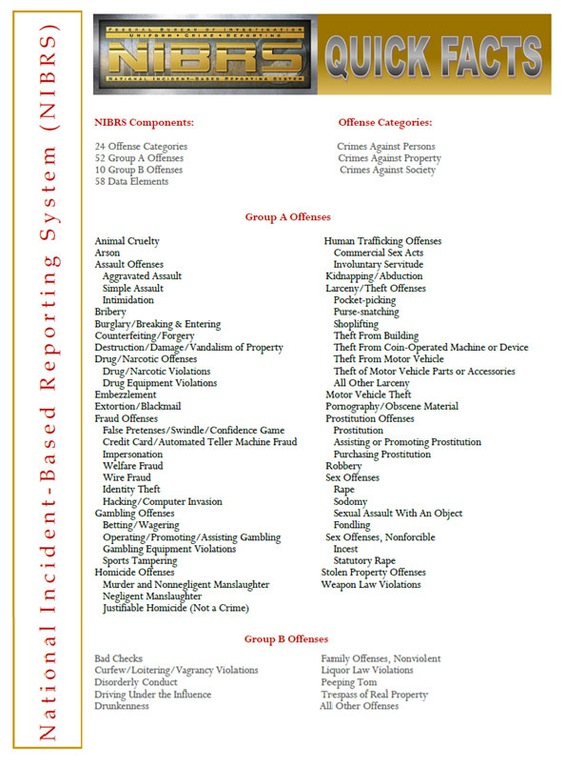