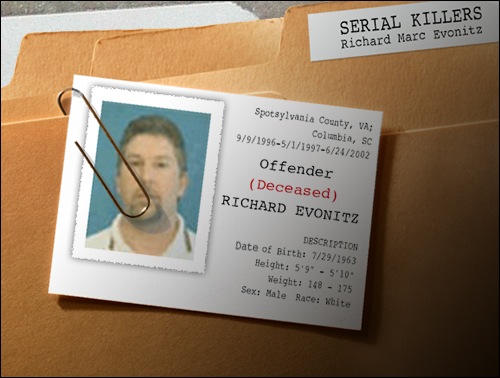 Richard Marc Evonitz committed three murders in Virginia. Over the years, the FBI has played a slowly evolving role in addressing the threat of serial killers.

Seventeen years ago yesterday—on September 9, 1996—a teenager disappeared from her home in Spotsylvania County, Virginia. Tragically, she was found dead the following month. The next May, two sisters in the same county went missing after coming home from school. Five days later, their bodies were found in a river about 40 miles away.

This trio of murders was the work of a serial killer named Richard Marc Evonitz. It took another five years for him to be identified. In June 2002, after a teenage girl managed to escape from a kidnapper in South Carolina, she identified Evonitz as her abductor. He fled to Florida and committed suicide as authorities closed in. Valuable trace evidence collected by the FBI later definitively linked him to the murders of the three Virginia girls. He is suspected of more homicides and other attacks.

Although relatively rare, serial killings have both horrified and fascinated the American people for decades. Serial murderers (see sidebar for the FBI’s definition) have existed throughout history and have been popularized by such killers as Jack the Ripper in England and Herman Webster Mudgett in the United States in the late 1800s. The exact origin of the term serial killer or serial murderer is not known, but it appears to have come into use in law enforcement circles in the 1970s and more commonly in society in the 1980s and 1990s.

Over the years, the FBI has played a slowly evolving role in addressing the threat of serial killers. In its earliest days, few violent crimes fell under the Bureau’s jurisdiction. It depended on where the crime occurred—if it was on government property, the high seas, or certain Indian reservations, the FBI took charge. In the 1930s, the FBI became a household name as it tackled violent gangsters and gained more law enforcement authorities in the process. In the 1950s and ’60s, the Bureau supported local and state law enforcement in some high-profile serial killer cases like the Boston Strangler and the Zodiac Killer of Northern California.

It was in the 1970s, however, that the FBI’s role in addressing serial killers began to grow as new capabilities were developed. Building on earlier work in New York and elsewhere, Special Agent Howard Teten and others in the Bureau began to apply the insights of psychology and behavioral science to violent criminal behavior in a comprehensive way. Since then, the FBI has become a leader in behavioral analysis, providing an array of support and training to help identify serial killers and to prevent future violence.

The FBI’s involvement in serial killer cases has also evolved under federal law. For example, the Bureau was authorized to investigate violent crimes against interstate travelers in 1994 and serial killings specifically in 1998. The FBI may investigate only when requested to do so by an appropriate law enforcement agency. The Bureau is also authorized to provide a variety of support services, from laboratory and behavioral analysis to crime statistics collection and the sharing of criminal identification and history information through our longstanding services and systems.

In the coming months, FBI.gov will examine the Bureau’s role in addressing serial killings in more detail, including our work in some of the most horrific serial murder investigations in the last 40 years.

In 2008, behavioral analysts in the FBI’s National Center for the Analysis of Violent Crime—part of our Critical Incident Response Group—issued a comprehensive report entitled Serial Murder: Multi-Disciplinary Perspectives for Investigators. Based on the findings of a five-day conference three years earlier that included 135 experts from across different fields, the monograph defined serial murder as “the unlawful killing of two or more victims by the same offender(s), in separate events.”

Numerous law enforcement officers and other representatives from the U.S. and Central America have taken part in the six CARSI programs.