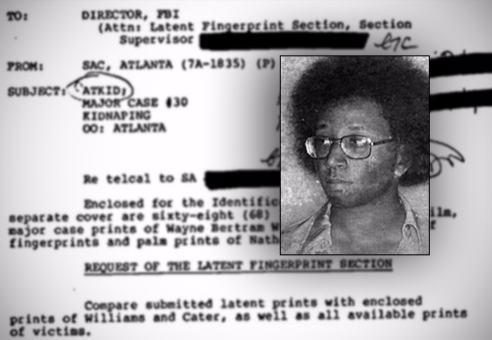 Evidence linked Wayne Williams, inset above over one of the files in his case, to 22 murders in Atlanta beginning in 1979. The FBI’s involvement began in 1980 following the abduction of a 7-year-old girl.

On July 21, 1979, a 14-year-old boy disappeared. Four days later, another teen went missing. Both, it was soon learned, had been killed.

It was the beginning of a shocking series of murders—some 29 in all—that would take place over the next 22 months in Atlanta. The victims were all young African-Americans, and as the death toll mounted, so did fear and tension across the city.

The FBI’s involvement in the case began on June 22, 1980 following the abduction of a 7-year-old girl. The Atlanta Police Department, which—along with the Georgia Bureau of Investigation—was investigating the string of killings, asked the FBI if the federal kidnapping statute had been violated.

None of the crimes appeared to fall under federal law, but Special Agent in Charge John Glover—the first African-American to lead an FBI field office—offered all the support the Bureau could give under the circumstances. Our Atlanta office helped follow up on out-of-state leads. The FBI Lab provided assistance. And our Behavioral Sciences Unit sent an expert to develop a profile of a possible perpetrator.

Meanwhile, the murders continued. Local politicians, the news media, and even Georgia Senator Sam Nunn asked the Department of Justice to permit FBI involvement, and the attorney general did so on November 6, 1980, authorizing a preliminary investigation. On November 17, the Bureau launched a major case investigation, devoting more than two dozen agents and other personnel to the case full time.

FBI agents joined local and state law enforcement officers on a task force investigating the murders. Collectively, they focused on a dozen disappearances with several shared traits. The victims were all young African-American males who vanished in broad daylight in fairly public locations. Their bodies were found in desolate areas. Their murders had no obvious motivation (in contrast, two other homicides from that period appeared to have been gang-related). These commonalities suggested a single killer. 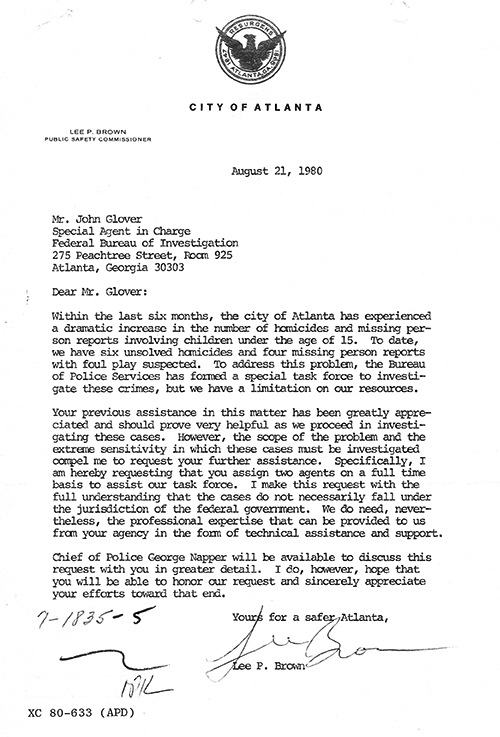 The City of Atlanta formally asked for FBI assistance on August 21, 1980.

The case continued through the winter and into the spring of 1981. By late April, however, the killer began to change his behavior, dumping the victims’ bodies in the Chattahoochee River. Members of the task force staked out the 14 bridges in the Atlanta metropolitan area that crossed the river and patiently waited.

On May 22, a big break came in the case. One of the groups conducting surveillance—consisting of an FBI agent, an Atlanta police officer, and two police cadets—heard a loud splash around 2:52 a.m. A car sped across the bridge, turned around in a parking lot on the other side, and sped back across the bridge. The vehicle was pursued and stopped. The driver was a 23-year-old African-American freelance photographer named Wayne Williams.

Lacking probable cause, authorities let Williams go. But when the body of a young African-American man named Nathaniel Cater was found downstream two days later, more attention was paid to Williams. Investigators soon learned that his alibi was poor and that he had been arrested earlier that year for impersonating a police officer. Later, he failed multiple polygraph examinations.

Williams was arrested on June 21, 1981. He was convicted of two murders on February 27, 1982, after he was linked to the victims through meticulous hair and fiber analysis and witness testimony. Following the trial, the law enforcement task force concluded that there was enough evidence to link Williams to another 20 of the 29 deaths. He went to jail for life, and the Atlanta child killings stopped.

New awareness campaign highlights the dangers of pointing lasers at aircraft in flight.

Four MS-13 leaders were sentenced to life in prison for terrorizing the streets of Atlanta.