Murderer Andrew Cunanan was added to the FBI’s Ten Most Wanted Fugitives list on June 12, 1997, shortly before he killed Gianni Versace.

Around 8:45 on the morning of July 15, 1997, international fashion designer Gianni Versace returned home to his Miami Beach mansion on Ocean Drive following a walk to a local café.

Suddenly, a man approached Versace, pulled out a pistol, and killed him with two shots to the back of his head. The man fled—followed at a distance by at least one witness—and disappeared into a nearby parking garage.

Miami Beach homicide detectives soon asked for assistance from the FBI’s local field office in the city. The officers were concerned that the killing might be a murder-for-hire, but evidence quickly suggested that it wasn’t. Inside the parking garage identified by the witness was a red pickup truck linked to a murder in New Jersey and a man named Andrew Phillip Cunanan, the target of an ongoing manhunt.

Cunanan was a 27-year-old college dropout from California. He was highly intelligent, spoke two languages, and since his teenage years had sought to live a life of riches and comfort. He had supplemented his earnings from an odd job here and there by serving as a male prostitute and engaging in longer-term liaisons with older homosexuals who would shower him with gifts and cash.

For reasons that remain unclear, Cunanan had begun a murderous spree in late April 1997. First, he bludgeoned a former naval officer to death with a hammer in Minneapolis. A few days later, he shot and killed an architect and dumped his body near East Rush Lake in Minnesota. Both men were his long-time associates. In May, Cunanan targeted a stranger—a 72-year-old real estate developer—in Chicago. Cunanan stole the man’s car, and, less than a week later, murdered a cemetery worker in New Jersey. He then took that victim’s red truck and drove to Miami.

Throughout this time, authorities were putting together the pieces. The investigation and forensic work linked the Chicago murder and the others to Cunanan. On May 7, the FBI joined the search for Cunanan and quickly marshaled its resources to identify and interview his friends, family, and other contacts. The New Jersey murder made it clear Cunanan was moving across the country, and gay groups were especially concerned that he might insinuate himself into their circles and continue to commit murders. The New York City Gay and Lesbian Anti-Violence Project posted a large reward and sought to warn those who might know Cunanan.

Working with the television show America’s Most Wanted, the FBI made Cunanan the 449th addition to its Ten Most Wanted Fugitives list on June 12, 1997. Our offices in Minnesota, California, Illinois, New Jersey, and elsewhere continued to seek information about him. The Bureau also publicized a telephone tip line and disseminated details on the FBI’s public website. But Cunanan slipped under the radar.

With the murder of Gianni Versace, though, the net began to close. Eight days later, on July 23, 1997, the caretaker of a houseboat about two miles north of Versace’s house in Miami Beach reported hearing a gunshot. Responders found Cunanan dead from a self-inflicted wound. His killing spree was over. 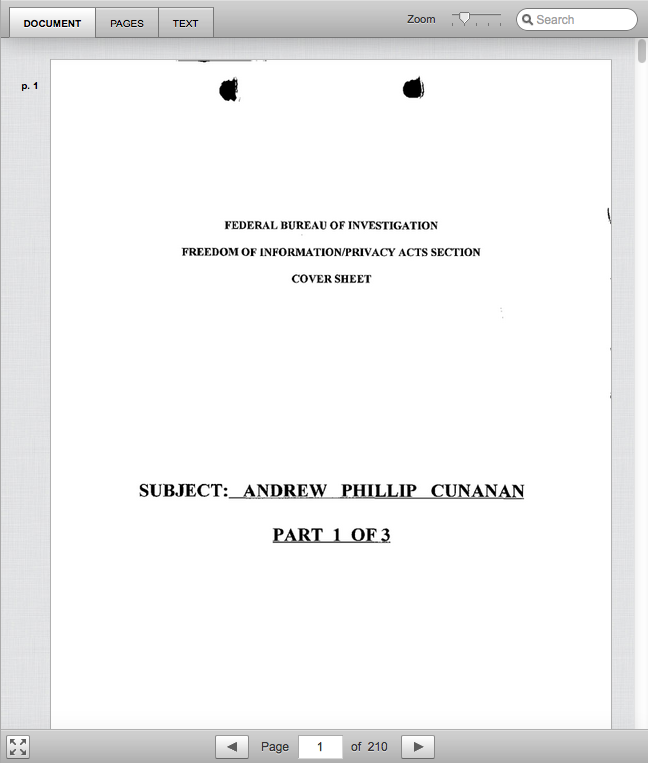 In the attempt to better understand violent criminals who murder more than one person, much debate has taken place about classifying such killers. To learn more about these differentiations, take a look at p.15 of a 1986 report by our National Center for the Analysis of Violent Crime and the report of a 2008 conference on serial murder. Andrew Cunanan murdered multiple individuals over a period of several months, separated by a “cooling off period,” making him fit the definition of a serial murderer.

We work with our federal partners to combat the rising tide of tax-related identity theft.