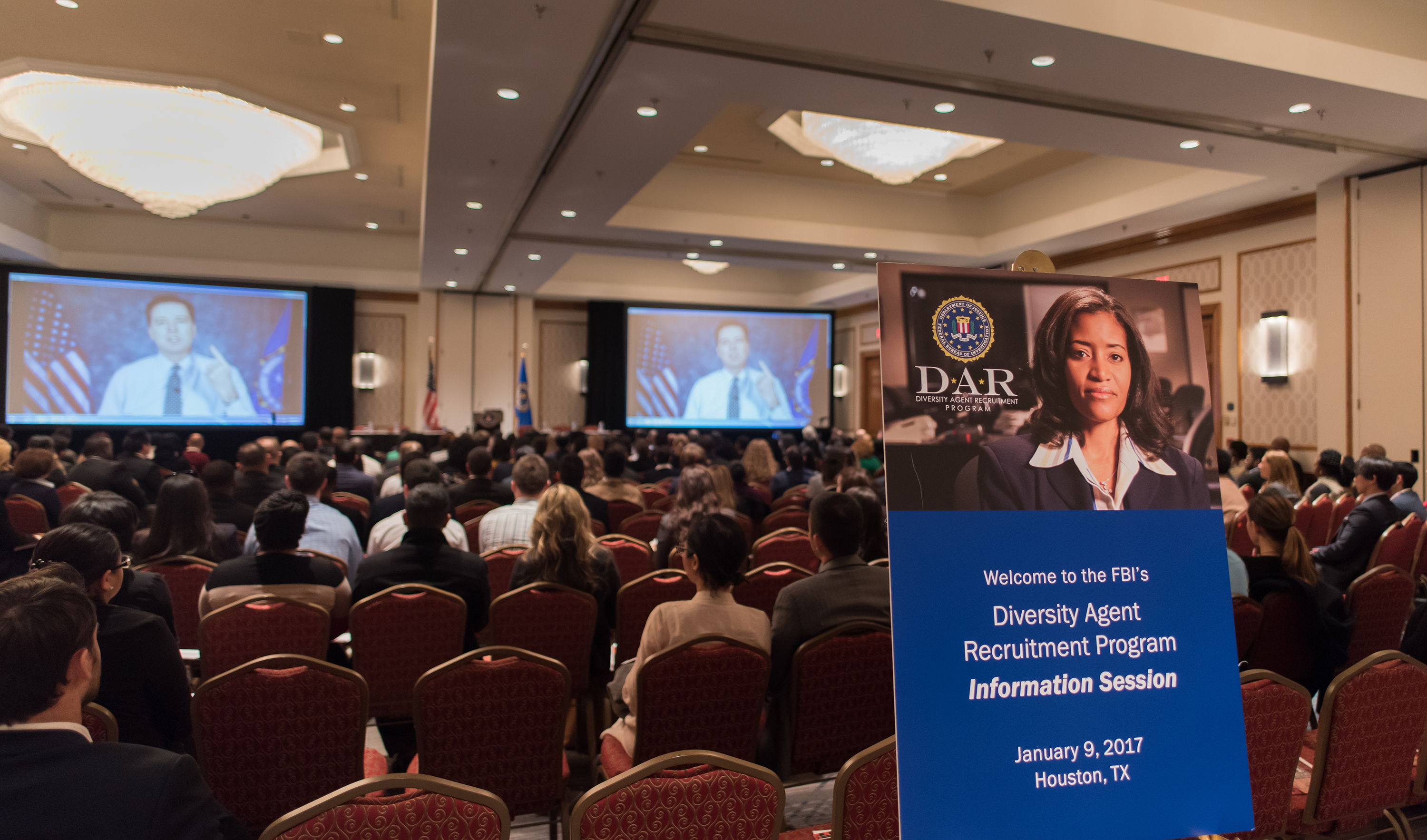 The Houston Division recently sponsored a recruiting event to attract applicants with diverse backgrounds to become special agents. Approximately 200 people attended the event, which included a video message from Director James Comey and presentations from a variety of agents about their varied paths to the Bureau.

When Special Agent Al Tribble joined the FBI 25 years ago, the organization wasn’t exactly known for its recruiting efforts—especially when it came to hiring women and people of color.

Much has changed since then. Today, the FBI understands that to effectively protect the American people, its special agents must reflect the diverse communities they serve. That’s why Tribble—who specializes in human trafficking and violent crimes against children investigations—participated in a recent recruiting event in Houston aimed at increasing diversity in the ranks of the FBI’s special agent corps.

As a veteran investigator and an African-American, Tribble spoke to potential applicants about the satisfaction of being a special agent. “The variety of work that you find in the FBI is unlike corporate America or any other private entity,” he said. “There’s so much you can do here, and you get to help people. When you take a victim of human trafficking and free her from her captors and reunite her with her family,” he explained, “there’s no feeling that can beat that.”

The FBI’s Diversity Agent Recruitment Program began in 2016 with an event in Washington, D.C., that attracted several hundred potential special agents from diverse backgrounds. The Houston event in January 2017 was attended by more than 200 people who heard from a panel of special agents about the varied paths that led them to the Bureau.

“I think a lot of people have in their mind what the FBI is and what the FBI does and what an FBI agent looks like,” said Special Agent Jenelle Janabajal, a presenter at the event, “and I think what we’re trying to do is maybe change some of those ideas and let people know that the FBI might be different from what you think.”

“What we’re trying to do is ... let people know that the FBI might be different from what you think.”

Special Agent David Baker, who works with special agent job applicants in the Houston Division, put it another way: “It doesn’t matter what walk of life you come from, what color you are, what race you are, what background you have,” he said, “there’s a place for you in the FBI.”

“One of the things that make us very attractive as an organization is that our employees have such different backgrounds,” said Perrye K. Turner, special agent in charge of the Houston Division. Turner, who has served as one of the Bureau’s national recruiters for nearly two decades, was instrumental in bringing the recent event to Houston. Such employee diversity means that “everybody brings something to the table,” he said. “That makes us stronger and more effective as an organization.”

The Path to the FBI

FBI agents from varied backgrounds describe how they arrived at the Bureau.

Tam Dao, a special agent in the Houston Division who primarily investigates national security crimes while also serving as a professor at the University of Houston, was born in Vietnam just weeks before the fall of Saigon in 1975.

Alfred Tribble Jr., a special agent in the FBI’s Houston Division who supervises investigations into human trafficking, civil rights violations, and violent crimes against children, worked in the banking industry before joining the Bureau 25 years ago.

Jenelle Janabajal, a special agent in the Corpus Christi office of the FBI’s Houston Division, was in the U.S. Marine Corps and attended law school before joining the Bureau.

The women, Latinos, Asians, and African-Americans in the audience heard from a variety of FBI agents about what it’s like to do good for a living—to take violent criminals off the streets, to hold public officials accountable when they violate the public’s trust, to thwart spies who would steal national secrets, and to stop terrorists. And after the official presentation, they were able to talk one-on-one with agents.

The event began with a video message from Director James Comey, who told the group that when he joined the Bureau in 2013, he inherited a special agent population that was 83 percent white. Comey made diversity one of the Bureau’s core values and began to increase efforts at diversity hiring.

A career in the FBI is like no other, he said. “This in an incredible family where no matter what you look like—black, white, Latino, Asian, Native American, whether you’re a man or a woman, whether you’re straight or gay—you feel welcome once you join this family.”

The statistics bear out that fact. The FBI’s turnover rate among agents is less than 1 percent. “That’s extraordinarily low,” Comey said, “and the reason it’s so low is once people become part of this life and see what it’s like to have as your mission protecting the American people and upholding the Constitution of the United States, nobody leaves.”

But if you possess those skills, he added, the FBI can be a career like no other. “So here is my challenge to you,” he said. “I dare you to take your ability and try to be a part of this organization.”

“Our employees have such different backgrounds. That makes us stronger and more effective as an organization.”

As in more than 60 offices, or legal attachés, around the world, the FBI’s most essential role in Israel is to develop strong, long-lasting relationships with international partners.

A case involving violent robbers who used Craigslist to target high-end jewelry sellers illustrates how the FBI and local police work together on complex multi-jurisdictional investigations.