Part 6: Mission in the Gulf of Aden 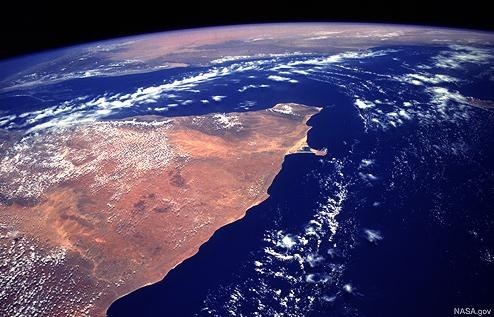 Satellite view of Somalia and the Indian Ocean. The Gulf of Aden and Yemen are seen to the north.

Early one morning in Nairobi, Kenya, information began flowing into the FBI’s legal attaché office there concerning the hijacking of a private yacht with four American passengers on board in the Gulf of Aden—perhaps the most pirated body of water in the world.

A Hostage Rescue Team operator temporarily stationed in Nairobi mobilized immediately—within hours, he was on his way to the scene off the coast of Somalia. Simultaneously, a crisis negotiator and former HRT operator was dispatched to a Navy destroyer that was shadowing the hijacked S/V Quest.

Events that unfolded over the next days were tragic—the Americans aboard the 54-foot pleasure boat were murdered by the armed Somali pirates—but the work of the HRT operators and other FBI agents helped make certain that those responsible for the crime were brought to justice, including a Somali co-conspirator who was not among the 19 hijackers on the vessel (see sidebar below).

The case serves as a sobering reminder of the value HRT operators and other FBI personnel add to U.S. military and international law enforcement missions around the globe in the fight against crime and terrorism.

“HRT operators possess the tactical skills that allow them to integrate with entities like the Department of Defense when there is a crime scene in a non-permissive environment,” explained one of the operators who responded to the Quest hijacking in February 2011. “But they are also experienced investigators. Having an FBI agent on the scene was a huge benefit,” he added, “because it allowed us to protect the integrity of the crime scene, to collect evidence, and to present that evidence in court.”

The pirates were attempting to sail the Quest and the hostages back to Somalia when they were overtaken by Navy warships. Military negotiators tried to secure the hostages’ release, but, according to court documents, the pirates said they would not comply. Some of the pirates began discussing killing hostages to get the U.S. boats to retreat. A rocket-propelled grenade was launched against a Navy ship as a warning shot. At the same time, hijackers guarding the hostages began firing their weapons.

In a federal courtroom in Norfolk, Virginia last August, Mohammad Saaili Shibin was sentenced to 10 life terms for his role in the hijacking of the S/V Quest and a German-owned vessel, even though the Somali man was on land when the Quest was hijacked.

Shibin was a key participant because he was responsible for negotiating the ransom of the Quest. Information gathered by our agents and the Naval Criminal Investigative Service showed that during negotiations between the hijackers and the U.S. government, Shibin was in Somalia conducting research on the Internet to learn about the Quest hostages and to determine the amount of ransom to demand.

Shibin was indicted, but he left his home in Somalia to evade authorities. “Over the course of a month-and-a-half, we chased him all over East Africa,” one of our HRT operators said. “With our military partners, we tracked him using every available resource.”

Eventually, with host-country permission, Shibin was arrested in Somalia by two HRT operators—and assistance from a third—and brought to the U.S. to face trial.

Seeing small-arms fire erupting from the cabin of the Quest, Navy personnel immediately launched an emergency assault against the pirates, but it was too late for the hostages.

An HRT operator followed the initial assault team and helped secure the yacht and detain the surviving pirates. Later, our agents began to process the crime scene.

“It was standard FBI crime-scene processing,” the HRT operator explained. “We began photographing and logging evidence, and we were able to provide a substantial amount of material to our New York Evidence Response Team when they arrived later in Djibouti, where the Quest had been towed.”

That evidence would be significant in federal court in Norfolk, Virginia, where multiple Somali pirates have since pled guilty to piracy and murder and received life terms in U.S. prison.

“That outcome was extremely gratifying,” the HRT operator said of the hijackers’ sentences. “In a difficult environment, we were able to do what agents are supposed to do, which is to bring criminals to justice.”

Can You Crack a Code?

Cryptanalysts in our Laboratory are pros at cracking codes. Try your hand at one.