UFOs And The Guy Hottel Memo

A single-page March 22, 1950 memo by Guy Hottel, special agent in charge of the Washington Field Office, regarding UFOs is the most viewed document in the FBI Vault, our online repository of public records.

It’s the most popular file in the FBI Vault—our high-tech electronic reading room housing various Bureau records released under the Freedom of Information Act. Over the past two years, this file has been viewed nearly a million times. Yet, it is only a single page, relaying an unconfirmed report that the FBI never even followed up on.

The file in question is a memo dated March 22, 1950—63 years ago last week. It was authored by Guy Hottel, then head of our field office in Washington, D.C. (see sidebar below for a brief biography). Like all memos to FBI Headquarters at that time, it was addressed to Director J. Edgar Hoover and recorded and indexed in FBI records.

The subject of the memo was anything but ordinary. It related a story told to one of our agents by a third party who said an Air Force investigator had reported that three “flying saucers” were recovered in New Mexico. The memo provided the following detail:

“They [the saucers] were described as being circular in shape with raised centers, approximately 50 feet in diameter. Each one was occupied by three bodies of human shape but only three feet tall, dressed in metallic cloth of a very fine texture. Each body was bandaged in a manner similar to the blackout suits used by speed fliers and test pilots.”

After relaying an informant’s claim that the saucers had been found because the government’s “high-powered radar” in the area had interfered with “the controlling mechanism of the saucers,” the memo ends simply by saying that “[n]o further evaluation was attempted” concerning the matter by the FBI agent. 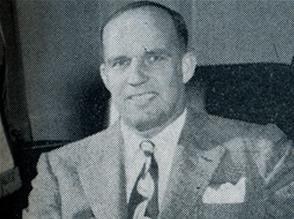 Guy L. Hottel was born around 1902. He was a graduate of George Washington University in Washington, D.C., where he was a star football player. He was later inducted into the university’s athletic hall of fame. He entered the FBI as a special agent in 1934. In December 1936, he was named acting head of the FBI’s Washington Field Office; he was appointed special agent in charge the following May and served until March 1941. Hottel was re-appointed special agent in charge in February 1943 and served until 1951, when he took a position in the Identification Division. He retired in 1955. Hottel was married three times and had two sons. Following his FBI career, Hottel served as executive secretary of the Horseman’s Benevolent Association. He died in June 1990.

That might have been the end of this particular story, just another informational dead end in the FBI files. But when we launched the Vault in April 2011, some media outlets noticed the Hottel memo and erroneously reported that the FBI had posted proof of a UFO crash at Roswell, New Mexico and the recovery of wreckage and alien corpses. The resulting stories went viral, and traffic to the new Vault soared.

So what’s the real story? A few facts to keep in mind:

First, the Hottel memo isn’t new. It was first released publicly in the late 1970s and had been posted on the FBI website for several years prior to the launch of the Vault.

Second, the Hottel memo is dated nearly three years after the infamous events in Roswell in July 1947. There is no reason to believe the two are connected. The FBI file on Roswell (another popular page) is posted elsewhere on the Vault.

Third, as noted in an earlier story, the FBI has only occasionally been involved in investigating reports of UFOs and extraterrestrials. For a few years after the Roswell incident, Director Hoover did order his agents—at the request of the Air Force—to verify any UFO sightings. That practice ended in July 1950, four months after the Hottel memo, suggesting that our Washington Field Office didn’t think enough of that flying saucer story to look into it.

Finally, the Hottel memo does not prove the existence of UFOs; it is simply a second- or third-hand claim that we never investigated. Some people believe the memo repeats a hoax that was circulating at that time, but the Bureau’s files have no information to verify that theory.

Sorry, no smoking gun on UFOs. The mystery remains…

Resources:
- The Guy Hottel memo
- Records on other unexplained phenomenon

Our series ends with a look at the HRT’s role in a sobering mission in the Gulf of Aden.