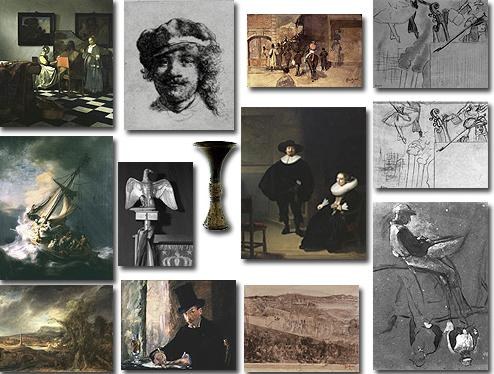 Reward Offered for Return of Artwork

Today, the FBI—along with Boston’s Isabella Stewart Gardner Museum and the U.S. Attorney’s Office in Massachusetts—asked for the public’s help in recovering artwork stolen from the museum more than two decades ago in what remains the largest property crime in U.S. history.

At a press conference this afternoon in Boston on the 23rd anniversary of the theft, officials hoped to get the attention of those who might have or know the whereabouts of the 13 stolen works of art—including rare paintings by Rembrandt and Vermeer—by publicly restating a $5 million reward.

“Today, we are pleased to announce that the FBI has made significant investigative progress in the search for the stolen art from the Isabella Stewart Gardner Museum,” said Richard DesLauriers, special agent in charge of the FBI’s Boston Field Office. “We’ve determined in the years after the theft that the art was transported to the Connecticut and Philadelphia regions. But we haven’t identified where the art is right now, and that’s why we are asking the public for help.”

“With these considerable developments in the investigation over the last couple of years,” said Special Agent Geoff Kelly, who heads the FBI investigation, “it’s likely over time someone has seen the art hanging on a wall, placed above a mantel, or stored in an attic. We want that person to call the FBI.”

Anthony Amore, the Gardner Museum’s chief of security, explained that the museum is offering a $5 million reward “for information that leads directly to the recovery of all of our items in good condition. What that means is that you don’t have to hand us the paintings to be eligible for the reward.” Amore added, “We hope that through this type of public campaign, people will see how earnest we are in our attempts to pay this reward and make our institution whole.”

Officials stressed that anyone with information about the artwork can contact the FBI, the museum, or the U.S. Attorney’s Office directly or through a third party. “An individual who wishes to protect his or her identity can go through an attorney and the reward can be paid through an attorney,” Amore said. “There is no shortage of ways to get information to us. We simply want to recover our paintings and move forward. This is the 23rd anniversary of the robbery,” he said. “It’s time for these paintings to come home.”

We need your help: If you have information about the missing Gardner Museum artwork, you can contact the FBI’s hotline at 1-800-CALL-FBI or submit a tip on our website. All information will be held in the strictest confidence.

Following Leads Around the World

On March 18, 1990, two men dressed as police officers gained access to the Gardner Museum in Boston. Once inside, they overpowered and tied up security guards and proceeded to steal 13 objects valued at approximately $500 million. In addition to Degas sketches and Rembrandt works, they took a Vermeer painting that was one of only 36 in existence.

Since that time, the FBI’s Boston Field Office has diligently investigated the case—in partnership with the museum and the Massachusetts U.S. Attorney’s Office—following leads around the world.

“The recovery of the paintings will mark the close of a 23-year FBI investigation,” said Richard DesLauriers, special agent in charge of our Boston office. “The successful return of the paintings to the Gardner Museum would be the final chapter in one of the most significant art theft cases in the FBI’s history. And it is a result we would all welcome—seeing these paintings returned to their rightful home.”

The FBI, along with Boston’s Isabella Stewart Gardner Museum and the Massachusetts U.S. Attorney’s Office, is asking the public for help in recovering artwork stolen from the museum more than two decades ago in what remains the largest property crime in U.S. history. Officials hope to get the attention of those who might have or know the whereabouts of the 13 stolen works of art—including rare paintings by Rembrandt and Vermeer—by publicly offering a $5 million reward.

Background
On March 18, 1990, two men disguised as police officers gained access to the Gardner Museum. Once inside, they tied up the security guards and proceeded to steal 13 objects, including rare paintings by Rembrandt, Degas, and Vermeer, valued at approximately $500 million. The case represents the largest property crime in U.S. history.

Cartha DeLoach, a trusted adviser to J. Edgar Hoover who led the MLK probe, dies at 92.