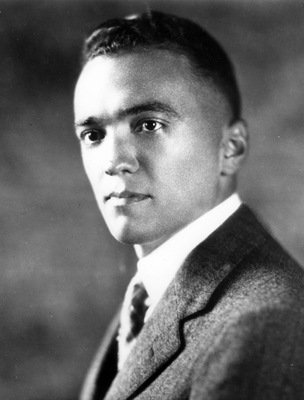 John Edgar Hoover was born in Washington, D.C. on January 1, 1895. Upon completing high school, he began working at the Library of Congress and attending night classes at George Washington University Law School. In 1916, he was awarded his LL.B. and the next year his LL.M.

Mr. Hoover entered on duty with the Department of Justice on July 26, 1917, and rose quickly in government service. In November 1918, he was named assistant to the attorney general, and the following year, he led the Department's General Intelligence Division (GID). When the GID was moved in the Bureau of Investigation in 1921, he was named assistant director of the BOI. On May 10, 1924, Attorney General Harlan Fiske Stone appointed the 29-year-old Hoover acting director of the Bureau, and by the end of the year Mr. Hoover was named Director.

As Director, Mr. Hoover put into effect a number of institutional changes to correct criticisms made of his predecessor’s administration. Director Hoover fired a number of agents whom he considered to be political appointees and/or unqualified to be special agents. He ordered background checks, interviews, and physical testing for new agent applicants and he revived the earlier Bureau policies of requiring legal or accounting training.

Under Director Hoover, the Bureau grew in responsibility and importance, becoming an integral part of the national government and an icon in American popular culture. In the 1930s, the FBI attacked the violent crime by gangsters and implemented programs to professionalize U.S. law enforcement through training and forensic assistance. For example, the Bureau opened its Technical Laboratory to provide forensic analysis on Bureau investigations as well as services to other federal, state, and local law enforcement officials.

During the 1940s and 1950s, the Bureau garnered headlines for its staunch efforts against Nazi and Communist espionage. During World War II, the Bureau took the lead in domestic counterintelligence, counterespionage, and countersabotage investigations. President Roosevelt also tasked the Bureau with running a foreign intelligence service in the Western Hemisphere. This operation was called the Special Intelligence Service, or SIS. In the early years of the Cold War, the Bureau took on the added responsibility of investigating the backgrounds of government employees to ensure that foreign agents did not infiltrate the government. More traditional criminal investigations including car thefts, bank robberies, and kidnappings also remained important.

In the 1960s and early 1970s, the Bureau took on investigations in the field of civil rights and organized crime. The threat of political violence occupied many of the Bureau’s resources as did the threat of foreign espionage. In spite of Mr. Hoover’s age and length of service, presidents of both parties made the decision to keep him at the helm of the Bureau. When Mr. Hoover died in his sleep on May 2, 1972, he had led the FBI for 48 years.