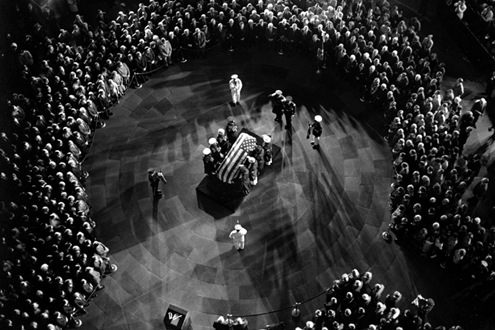 J. Edgar Hoover’s body lies in state in the U.S. Capitol in 1972—an honor afforded to no other civil servant before or since. Hoover died 40 years ago this week. AP photo

So when J. Edgar Hoover’s body was found by his housekeeper on the morning of May 2, 1972—40 years ago this week—the reaction was swift and far-reaching.

Later that day, President Richard Nixon called a press conference to announce the Director’s death, saying, “Every American, in my opinion, owes J. Edgar Hoover a great debt for building the FBI into the finest law enforcement organization in the entire world.” Nixon ordered that all flags at government buildings be flown at half-staff and spoke at Hoover’s funeral two days later. 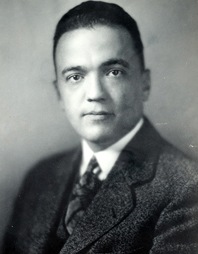 Congress responded quickly as well, ordering Hoover’s body to lie in state in the U.S. Capitol—an honor afforded to no other civil servant before or since. The next day, as rain fell on Washington, thousands processed by his casket in the rotunda to pay their respects, and Supreme Court Justice Warren Burger eulogized the departed Director. Allies and admirers took to the floor of Congress to offer often effusive praise, and a new FBI building on Pennsylvania Avenue, halfway between the Capitol and the White House, was soon named in his honor. Right: (J. Edgar Hoover)

At the same time, as the inevitable obituaries were written and TV specials aired, there was an undercurrent of reservation and some outright criticism. Hoover’s historic 48-year tenure in such a position of profound influence—and during a stretch of time when America was undergoing great social change—was bound to be marked by some mistakes and controversy. Fairly or unfairly, Hoover was criticized for his aggressive use of surveillance, his perceived reluctance to tackle civil rights crimes, his reputation for collecting and using information about U.S. leaders, and his seeming obsession with the threat of communism.

Both feared and beloved within his own organization, Hoover was clearly a complex and often confounding character. He joined the Department of Justice in 1917 at the tender age of 22 and quickly became a rising star. Hoover was tapped by the attorney general to head the Bureau in 1924, when it was a relatively unknown organization mired in political scandal. Hard-working, smart, and a superb bureaucrat, Hoover took a fledgling organization and molded it into an international leader in law enforcement and national security, one solidly grounded in professionalism and the techniques of modern science. As the Bureau put the trigger-happy gangsters of the 1930s out of business and outsmarted the spies and saboteurs of World War II, the FBI—and its newly christened “G-Men”—became a household name. Hoover rode that wave of fame, earning widespread acclaim as the nation’s top lawman.

The country’s honeymoon with Hoover would ultimately come to an end, to some degree in the years before his passing and even more so after his death in the wake of greater scrutiny of the FBI and the growing distrust of government leaders that followed Watergate. Over the next several months, FBI.gov will explore various aspects of the directorship of J. Edgar Hoover through a series of stories and other materials, with the goal of shedding light on lesser-known or even caricatured areas of his actions and broadening the discussion on his complex and enduring legacy.