The Hoover Legacy, 40 Years After, Part 4

Part 4: The Evolution of U.S. Intelligence 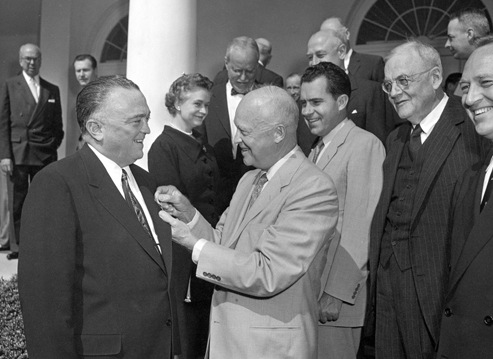 Director Hoover receives the National Security Medal from President Dwight Eisenhower on May 27, 1955, as then-Vice President Richard Nixon and others look on.

Standing outside the White House on a sunny day in May 1955, President Dwight Eisenhower smiled as he pinned the National Security Medal on the lapel of one of its first recipients—FBI Director J. Edgar Hoover.

In the citation, the president recognized Hoover’s “outstanding contribution to the national security of the United States” through “his exceptional tact, perceptiveness, judgment, and brilliant leadership in a position of great responsibility.”

The medal had been created only two years earlier by President Truman to recognize individuals—civilian and military—who had made important contributions to national security in the field of intelligence. The honor has since been supplanted by the National Intelligence Distinguished Service Medal.

Given that many Americans associate the early Bureau with chasing gangsters and solving murders and other violent crimes, it might seem unusual for a law enforcement leader to have been given such an award at that point in history. But Hoover, as it turns out, had played a key role in the evolution of the U.S. intelligence community and the transformation of the FBI into a national security organization.

That evolution took place over several decades. Hoover joined the Department of Justice two months after the U.S. entered World War I, when intelligence issues were a top priority. Within two years, he was appointed to head a new General Intelligence Division—also called the Radical Division—in response to widespread domestic terrorist attacks. The purpose of the division was to gather intelligence about terrorist threats and determine whether or not they were connected to foreign revolutionary movements.

Hoover continued his rise in the department and by 1924 was leading the Bureau of Investigation, the FBI’s predecessor. But during the 1920s, the U.S. faced few major national security threats. And excesses in the Bureau’s response to anarchist violence led to a tempering of domestic intelligence work during the decade.

In the mid-1930s, though, the security picture was changing. Evidence of Japanese and German (and to a lesser extent, Soviet) espionage began to accumulate, and the FBI was called upon to investigate. With the start of World War II, these responsibilities expanded dramatically, with Hoover’s FBI being tapped to handle domestic counterintelligence and the collection of foreign intelligence in the Western Hemisphere.

Throughout this time, Hoover dealt with a number of challenges. There was no U.S. intelligence community of any real size or complexity before the war, so the FBI became a key part of a rapidly growing group and Hoover a founding father. The number of players in the intelligence realm was large, and inevitable disagreements arose in the midst of some remarkable cooperation. Hoover played a central role in sorting out jurisdictional issues, addressing the inefficiencies of overlapping responsibilities, and helping the FBI and its partners navigate the steep learning curve of intelligence.

As the war ended and Soviet espionage became clear, Hoover’s FBI took its hard-won knowledge of intelligence and its tradecraft and shifted its attention to the new threat, uncovering earlier Soviet efforts and moving proactively against its current and future operations.

The end result of Hoover’s leadership was not just the National Security Medal, but a stronger and more capable Bureau that would play a key role in America’s national security structure for decades to come.

When most people buy a home they are required to submit financial paperwork to banks, title companies, and others involved in the mortgage process. The case of the “House King” in South Florida illustrates how when fraudsters manipulate that system, lenders can lose millions—and innocent buyers and sellers also suffer.