The Hoover Legacy, 40 Years After: Part 5 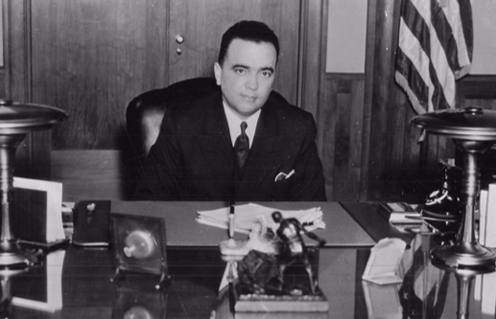 J. Edgar Hoover at his desk.

It’s 50 years ago today, a warm morning in late September 1962. The 67-year-old J. Edgar Hoover—who by then had served as FBI Director for 38 years—woke up, showered, and dressed.

Hoover’s long-time housekeeper, Annie Fields, served breakfast, and the Director shared a fair amount of it with his two Cairn Terriers—Cindy and G-Boy, his third dog by that name.

By 8 a.m., a Bureau driver arrived to get Hoover and then drove a few blocks away and picked up Associate Director Clyde Tolson. Since it was a nice day, the car stopped on Virginia Avenue near the National Mall. The two elderly gentlemen got out and walked the remaining six or seven blocks to the Department of Justice building.

Once inside, Hoover and Tolson took the elevator to the fifth floor. Hoover’s office suite was at the corner of the building on Pennsylvania Avenue and 9th Street, and Tolson’s was across the hall.

For the first hour or so, Hoover worked from his private office, reading through the many reports, offering his comments, and issuing his orders on the Bureau’s large and diverse number of cases and administrative matters. His comments—written in blue ink—showed a breadth of knowledge of Bureau activities and, sometimes, revealed Hoover’s personality and sharp wit (see sidebar).

Just before 10 a.m., Hoover moved to his larger, formal office and began a series of public meetings. He met with Lieutenant Colonel Jose Lukhan, his counterpart in the Philippines. Then came a visit with Special Agent Robert G. Emond, who was about to become the head of security at the U.S. Information Agency.

Promptly a few minutes before noon, Hoover and Tolson were driven to the Mayflower Hotel for their regular lunch, which lasted an hour. Hoover’s afternoon included a meeting with a visiting retired agent and a dental appointment. Shortly after 4:30 p.m., Hoover received a telephone call from President Kennedy’s chief of staff, Kenneth O’Donnel; the two talked for some time. Given the developing Cuban Missile Crisis and the impending desegregation of the University of Mississippi, the issue of the call was clearly of national importance.

At 5:20 p.m., Hoover and Tolson left together and were driven to their respective homes. Many days Hoover stayed much later.

For the aging Hoover, this day—recreated from previously released office logs, FBI files, and other government documents—was a typical one. The Director would pass away in his sleep just under a decade later, ending his remarkable 48-year run as head of the FBI. His time in office, which represented a period of great cultural and technological change for the nation, was not without its missteps. But as Director, Hoover’s intelligence and organizational skills helped turn a small, largely unknown organization into what it is today—a premier national security organization with both law enforcement and intelligence responsibilities, one that protects the nation from a variety of serious threats while providing leadership to its partners around the world.

They’ve played the part of everyone from a college student to a CEO…created and run entire fictitious companies…attended motorcycle gang weddings…even been “arrested” for the good of the cause.