Part 2: His First Job and the FBI Files 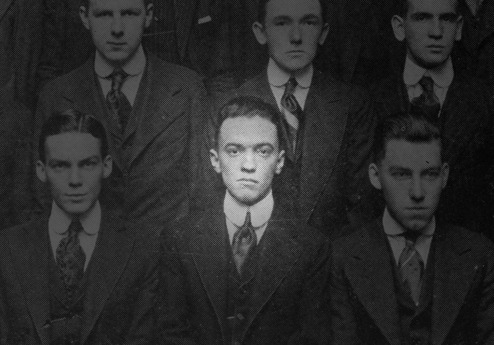 It was October 13, 1913. No one knew it at the time, but an important foundation in Hoover’s future career as FBI Director (and in the Bureau itself) was being laid.

Young Hoover excelled at his work. He impressed his supervisors and was awarded multiple raises. His position in the orders department—which acquired books, manuscripts, and other items for the Library’s collections—included the opportunity to work in the cataloging department and the loan division. The Library was a half-mile from his house and allowed him to attend law school at night, where he was studying hard and learning quickly. 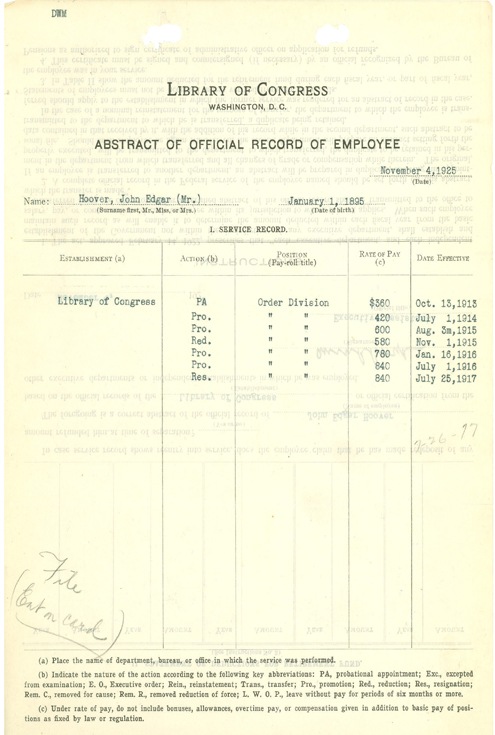 On July 25, 1917, Hoover left the Library, and he took a job the next day as a clerk in the Department of Justice, where his story becomes better known.

Hoover’s experiences with the Library of Congress and its innovative organization of knowledge have often been credited with influencing the creation of the FBI’s own knowledge management system—the FBI files. The filing system he helped architect became almost legendary for its efficiency and over the years has been fodder for books, news stories, movies, and even conspiracy theories of all sorts that exaggerate the size and scope of the files.

But were the FBI files modeled on the Library of Congress system? Actually, no. The FBI filing system is based on the type of case the file covers. Each file is designated by a classification number—for example, kidnapping cases begin with the number 7, espionage cases with the number 65. This is only vaguely similar to the Library’s system. Also, these classifications were already being used by the Department of Justice; Hoover’s Bureau simply adapted them for its own purposes.

What is true, however, is that Hoover’s Library experience did have a significant impact on how the FBI’s filing system was used and adapted. In a 1951 letter referencing his former position, Hoover wrote, “[T]his job …trained me in the value of collating material. It gave me an excellent foundation for my work in the FBI where it has been necessary to collate information and evidence.”

This ability to synthesize information was key. In 1921, as assistant director, Hoover oversaw the reform of the Bureau’s files, which were in disarray after several organizational restructurings. For the reform, Hoover took something old—the Department of Justice system—and something new—indexing the files as they were created. And then he used something borrowed—from the Library of Congress: the idea of extensive cross-references within the card indices that provided access to the content of the FBI files. Each cross-reference pointed back to the original file and allowed for comparison of information across all files. So an agent or clerk could find a person’s name, an event, a location, or any number of other things, even if it was spread across dozens of different files at Headquarters and in the field offices. In a profession that requires intelligence at its fingertips and the ability to know everything that’s available, this system was crucial to the success of Hoover’s Bureau as it grew and adapted to its expanding mission.

In the end, Hoover’s work at the Library helped the Bureau to create a filing system that—in comparison to others of the day—was “unique unto itself,” as one records manager noted in 1941 when surveying the state of records across the nation.

It was September 2009—a few days before the eighth anniversary of the 9/11 attacks—when the Denver Joint Terrorism Task Force (JTTF) received word that a Colorado resident and al Qaeda recruit was about to carry out a major terrorist attack. The jihadist needed to be located with the utmost urgency.