A new federal regulation regarding the FBI’s Anti-Piracy Warning (APW) Seal took effect several years ago—41 CFR Section 128-1.5009 authorizes use of the APW Seal by all U.S. copyright holders, subject to specific conditions of use. Copyrighted works can include, but are not limited to, films, audio recordings, electronic media, software, books, photographs, etc. The purpose of the APW Seal is to remind media users of the serious consequences of pirating copyrighted works. Use of this seal does not indicate that the FBI has reviewed or validated copyright interests in the particular work and does not provide greater legal protection to the work. It simply serves as a widely recognizable reminder of the FBI’s authority and mission with respect to the protection of intellectual property rights.

Those wishing to use the APW Seal must obtain the image directly from our website and display it directly adjacent to the authorized warning language. Additionally, copyright holders are encouraged to use independent, industry-recognized copyright anti-circumvention or copy protection techniques to discourage copying of the APW Seal. The new 41 CFR Section 128-1.5009 also prohibits use of the APW Seal on any work whose production, distribution, sale, public presentation, or mailing would violate the laws of the United States. Any use indicating the FBI has approved, authorized, or endorsed any work or product, or that the FBI has determined that any portion of a work is entitled to protection of the law, is also prohibited.

Our APW Seal program is one aspect of a larger anti-piracy effort. The FBI, both independently and through its partnership with other federal agencies and the National Intellectual Property Rights Coordination Center (IPR Center), is currently working to increase public awareness of the issues related to copyright piracy and other intellectual property theft.

Intellectual property rights theft is not a victimless crime. Because of piracy of media and other commercial goods, U.S. businesses lose millions of dollars each year, threatening American jobs and negatively impacting the economy. Not only can the violation of intellectual property rights damage the economy, it also poses serious health and safety risks to consumers, and often times, it fuels global organized crime. The FBI, along with the U.S. Attorney’s Offices, has made investigating and preventing intellectual property theft a top priority within the Bureau. Violating these laws by reproducing or distributing copyrighted work, with or without monetary gain, is investigated by the FBI and punishable by fines and federal imprisonment.

For years, the FBI has actively worked to help deter piracy of intellectual property. In December 2003, the Bureau authorized the use of the Anti-Piracy Warning Seal through Memoranda of Understanding (MOU) with entertainment and software industry associations. By August 2006, the FBI had executed MOUs with five associations, specifically the Motion Picture Association of America (MPAA), the Recording Industry Association of America (RIAA), the Software & Information Industry Association (SIIA), the Business Software Alliance (BSA), and the Entertainment Software Association (ESA). The MOUs required each association’s members, or authorized parties, to execute a formal agreement prior to using the APW Seal. These agreements, which allow other uses of the APW Seal by these associations, remain in place. The new regulation allows all copyright holders to use the APW Seal without executing written agreements with the FBI or an industry association.

A last word to the wise: Use of the APW Seal in a manner inconsistent with 41 CFR § 128-1.5009 constitutes an unauthorized use of an official FBI insignia. Unauthorized uses of official FBI insignia, including the APW Seal, may violate federal law, specifically Section 701 of Title 18 of the United States Code. Additionally, use of the FBI’s name or initials to indicate FBI approval, endorsement, or authorization, is governed by Sections 709 and 712 of Title 18 of the United States Code. Violations of these provisions may result in fines or imprisonment.

A Note on Fair Use

The FBI recognizes that the fair use of copyrighted materials, as codified in Title 17, United States Code, section 107, does not constitute copyright infringement. The APW Seal is not intended to discourage fair uses of copyrighted materials that are consistent with U.S. law. More information about copyright law and fair use is available from The Library of Congress, U.S. Copyright Office at www.copyright.gov.

However, it has come to the FBI’s attention that “Fair Use Warnings” accompanied by an image of the official FBI Seal (or similar insignia) have been posted on various websites, giving the appearance that the FBI has created or authorized these notices to advise the public about the fair use doctrine in U.S. copyright law. These warnings are not authorized or endorsed by the FBI.

Prohibitions Regarding Use of the APW SealThe following prohibitions are specified in 41 CFR Section 128-1.5009(f):

The Anti-Piracy Warning (APW) Seal has been approved by the U.S. Attorney General as an official insignia of the FBI and the U.S. Department of Justice. The purpose of the APW Seal is to help detect and deter criminal violations of U.S. intellectual property laws by educating the public about the existence of these laws and the authority of the FBI to enforce them. Any copyright holder who complies with the conditions of 41 CFR Section 128-1.5009 can use the Seal.

The APW Seal can only appear on works that meet all of the following:

Download FBI Anti-Piracy Warning Seal by clicking on the seal below and then clicking again to see the terms of use (lawful use requires the below authorized text to be placed immediately adjacent to Seal on the copyrighted work, see 41 CFR Section 128-1.5009(e)2). 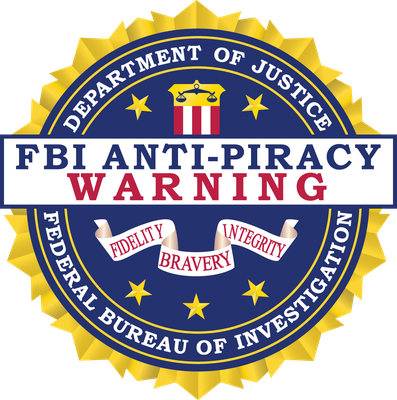 The unauthorized reproduction or distribution of a copyrighted work is illegal. Criminal copyright infringement, including infringement without monetary gain, is investigated by the FBI and is punishable by fines and federal imprisonment.

Here are two alternate versions of the warning language, in both English and Spanish:

Warning language in an abbreviated form

The unauthorized reproduction or distribution of a copyrighted work is illegal. Criminal copyright infringement is investigated by federal law enforcement agencies and is punishable by up to five years in prison and a fine of $250,000.