Part 2: Operation Save Our Streets 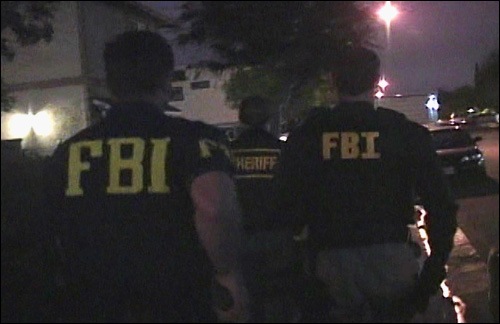 Twenty-seven homicide cases were cleared during the initial 90-day trial of Save Our Streets in 2010.

The murders may be random and senseless—a drive-by shooting that kills an innocent bystander—or they may be targeted hits by individuals “putting in work” against rival gang members. Either way, officials estimate that more than half of all the homicides that occur in Los Angeles are gang related.

To address the problem, the FBI joined with the Los Angeles Police Department (LAPD) in establishing a gang homicide task force in 2010 called Save Our Streets (SOS). It was an idea born of necessity, and it has been extremely successful.

“We’ve had a record number of homicide clearances because of the SOS effort,” said FBI Los Angeles Assistant Special Agent in Charge Robert Clark. The task force—which Clark proposed—focuses on murder investigations that are close to being solved but need an extra investigative push and other resources to result in indictments and arrests.

“Recognizing that there were a large number of unsolved gang-related homicides in L.A., we decided to pool our resources,” Clark said, “and have seasoned FBI investigators and LAPD homicide detectives work together to solve cases.”

“The FBI offered us everything from personnel to laptops,” said Cheryl Nalls, a veteran LAPD detective who works in the Criminal Gang/Homicide Division in South Central L.A. “We have a serious gang problem here,” she said, adding that in 2010, lack of funds threatened to imperil many gang-related homicide investigations.

In that year, a city budget crisis forced administrators to place a cap on the amount of overtime homicide detectives could work, which meant that some investigations were put at risk. The SOS initiative provided temporary federal funding to pay overtime costs along with investigative manpower and additional resources.

During the initial 90-day trial period of SOS in 2010, 27 homicide cases were cleared, a number that was “unheard of in such a short period of time,” Clark said. The following year, during the same 90-day period from July through September, SOS task force officers cleared 50 homicide cases.

“A host of things are being done in L.A. to contribute to the annual murder rate dropping to record lows,” Clark said, “and SOS is absolutely a part of that. We’ve cleared more than 200 cases since the program began, and that means we’ve sent more than 200 people to jail. SOS puts murderers behind bars.”

“We have established a great partnership with the FBI,” Nalls said. “Agents work hand in hand with LAPD investigators, and cases get solved.”

Today, the SOS Task Force has become a permanent part of the FBI’s anti-gang operations in Los Angeles, and Clark is able to assign task force officers to the city’s gang hotspots.

Special Agent Bob Scheerle, an SOS member, currently sits with his LAPD counterparts in the police department’s Harbor office in southern Los Angeles—a jurisdiction where there are seven major gangs, methamphetamine is the illicit drug of choice, and the majority of murders are gang-related.

Having agents and detectives sitting together, working cases side by side, makes for a true partnership, Scheerle said, “and that helps solve more cases.”

“Those relationships are what make SOS work, not just funding and equipment,” Clark added. “We are all working toward a common goal—to make the community a better place in which to live.”

Nalls agrees. “SOS has been a win-win for everybody,” she said, “but most especially for the community.”

Next: Cleaning up gang neighborhoods, one alleyway at a time

A Model for Other Jurisdictions

Since the Save Our Streets Task Force was established nearly four years ago, the model has been tested in several other FBI divisions, according to Robert Clark, an assistant special agent in charge in our Los Angeles Division.

“We had such success implementing SOS,” Clark recalled, “that people wanted to know how the partnership between the LAPD and the FBI produced such dramatic results in clearing unsolved homicides.”

Clark and SOS members from the LAPD briefed executives at FBI Headquarters in Washington and helped several divisions set up trial SOS programs with their local police departments—in areas such as East St. Louis and San Juan, Puerto Rico—where gang crime is significant.

“The SOS model will work with any type of crime,” Clark said. “It doesn’t have to be just homicides. San Juan targeted violent carjackings, and another jurisdiction addressed aggravated assaults because they were doing pretty good on their homicide clearances.” He added, “If you have good partnerships and relationships between organizations, the SOS model can work anywhere.”

Part 3 in our series looks at how one initiative is helping heal communities affected by gangs.

The first in a series of stories looks at the FBI’s innovative approach to a serious problem.