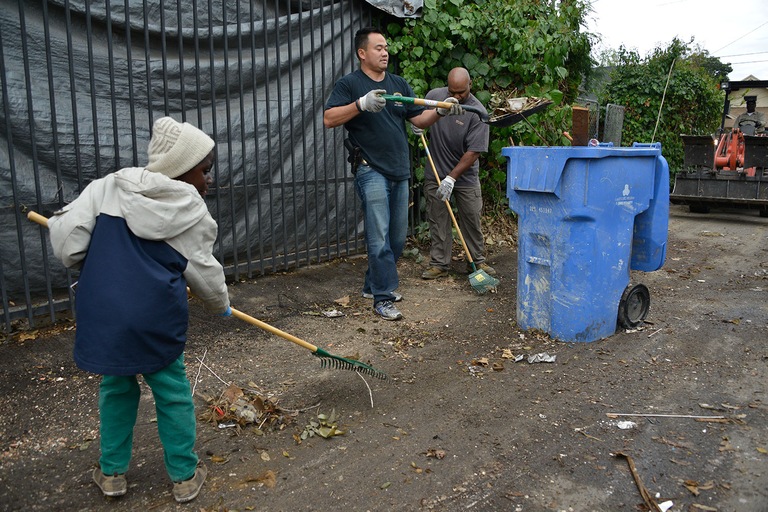 Through the FBI’s Community Impact Initiative, law enforcement personnel and other volunteers return to neighborhoods after gang busts to clean alleyways, working alongside residents and property owners.

At 5 a.m., the command post in our Los Angeles Division was buzzing with activity. It would be a day of reckoning for nearly two dozen members of MS-13, the violent street gang that over the years has brought drugs, murder, and misery to countless Los Angeles neighborhoods.

Before the sun came up, teams of FBI agents and their partners from the Los Angeles Police Department (LAPD) began making arrests. In short order, the large video monitors in the command post started to show the words “in custody” next to the images of the subjects—many of whom were wanted on federal drug charges and were the gang’s leaders, or “shot callers,” in the parlance of the street.

In Los Angeles—often referred to as the gang capital of the world—it was just another day for the men and women of the FBI who work to protect the community from hundreds of area gangs. But locking up these criminals is only part of the story. Together with our law enforcement and community partners, the Los Angeles Division is taking a leadership role in the fight against gangs with innovative programs designed to bring healing as well as justice to neighborhoods ravaged by violence and intimidation.

“You can’t arrest your way out of the gang problem,” explained Robert Clark, an assistant special agent in charge in our Los Angeles Division. “Looking at the statistics prior to 2007 and in the seven years since I’ve been here,” he said, “there’s been upwards of a 300 percent increase in arrests, but the gang problem still exists.”

Clark and others considered new approaches. “Where could we bring our resources and our like ideas to really have an impact in the community?” he asked. “FBI agents and local police officers can’t be everywhere. That’s why it was important that we build relationships in the community. Those relationships are essential to solving crimes.”

Understanding firsthand the challenges facing gang-plagued neighborhoods based on his own childhood growing up in the inner city of Youngstown, Ohio, Clark spearheaded three initiatives that are making a difference in Los Angeles. In the coming weeks, FBI.gov will chronicle those programs, which are helping to empower communities, reduce the crime rate, clear unsolved murder cases, and aid in intelligence-gathering efforts that allow the Bureau to monitor gangs with an international reach such as MS-13.

“Thanks to the hard work of many, many people,” Clark said, “we have been able to take these ideas and implement them and measure their success. We have been able to take murderers off the streets,” he added, “and just as importantly, we are helping to improve the quality of life in communities where residents often felt forgotten or ignored.”

Next: Operation Save Our Streets

The second piece in our series looks at a gang homicide task force called Save Our Streets (SOS).

New awareness campaign highlights the dangers of pointing lasers at aircraft in flight.