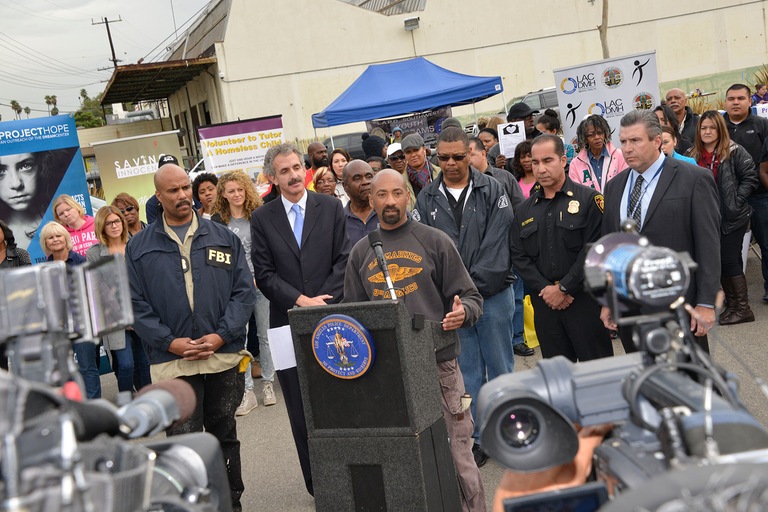 Driving along the streets and alleyways of Baldwin Village—known as “The Jungle” and historically one of the most violent gang neighborhoods in South Central Los Angeles—homicide detective Cedric Washington can recall in detail the many gang-related shootings and murders he has investigated there. In his 17 years with the Los Angeles Police Department, he has learned a hard truth: “It’s too easy to become a victim here.”

But Washington also sees something else in Baldwin Village. Beyond the violence and the victims, he sees a restored neighborhood taking shape. Part of the credit for that goes to an FBI program he helped establish. It’s called the Community Impact Initiative, and it’s designed to work after law enforcement puts gang members behind bars.

The program brings together law enforcement personnel and volunteers from a variety of government, business, and community organizations to work alongside residents and property owners to clean up alleyways, paint over graffiti, and install security cameras—all to help residents stake a new claim on their neighborhoods.

“A few years ago, we were arresting dozens of gang members at a time,” said Robert Clark, an assistant special agent in charge in our Los Angeles Division. “That was impactful, but then someone said: ‘You arrested X number of gang members. How did that improve the quality of life in that particular neighborhood?’” The question, he remembered, “caught us flat-footed, because for law enforcement, it usually stops at the numbers—the arrest statistics. We realized there was more that we could do.”

Clark, Washington, and others organized the first community impact day after a major gang takedown in Baldwin Village and enlisted more than 100 volunteers to donate time and materials. “The city has existing programs to mitigate trash and graffiti,” Clark said, “so we partnered with them as well.” 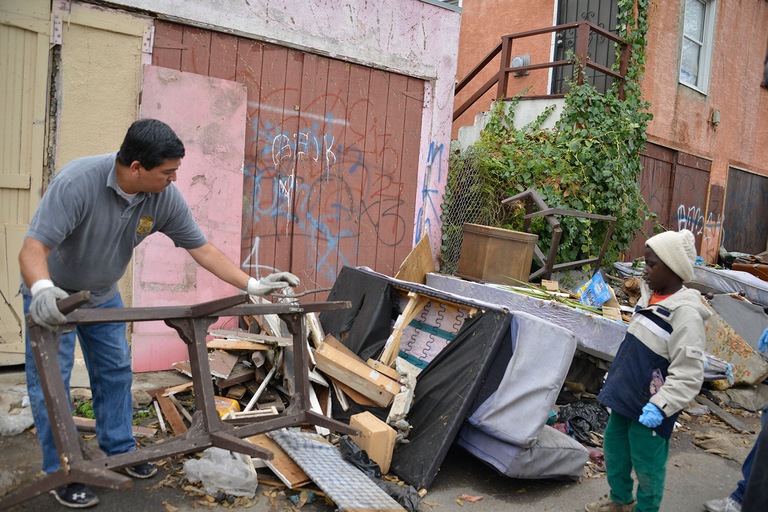 Community Impact Initiative participants help clean up a neighborhood following a gang takedown in the area.

The result of that and a second cleanup effort was that “children were able to return to the playground,” Clark said, “and people could walk to the shopping areas and feel safe.”

With gang members in jail, the crime rate went down—and stayed down. “Because of our law enforcement action and the community impact piece,” Clark said, “we’ve been able to maintain a double digit reduction in the crime rate in Baldwin Village.”

The Community Impact Initiative has now become a regular part of the Bureau’s anti-gang operations. “After the bad guys have been arrested and removed,” Clark said, “we roll back into those communities within 90 days with our volunteers.”

That causes residents to view law enforcement in a different way. “Some folks think all we do is arrest people,” Clark said. “A lot of people in these neighborhoods feel ignored and forgotten. But then they see us working with them to improve where they live.”

The Community Impact Initiative works because it builds relationships, Clark explained. “We have breakfast with residents and face-to-face conversations. They see that we care about their quality of life.” In return, residents are more willing to cooperate with law enforcement, which helps solve cases and adds to the reduction in crime.

“I’ve seen generations of young kids in these neighborhoods with such potential,” Washington said. “Then you fast forward and they’re in gangs. But because of our enforcement efforts and the community impact days, Baldwin Village is getting better,” the detective said. And that gives him hope. “I can see the results of our efforts.”

Next: The Homicide Library project

Corrupt DMV employees issued licenses for payments between $500 and $2,500.

The second piece in our series looks at a gang homicide task force called Save Our Streets (SOS).