Field The Gangs of Los Angeles

Part 5: The Power of Partners and Intelligence 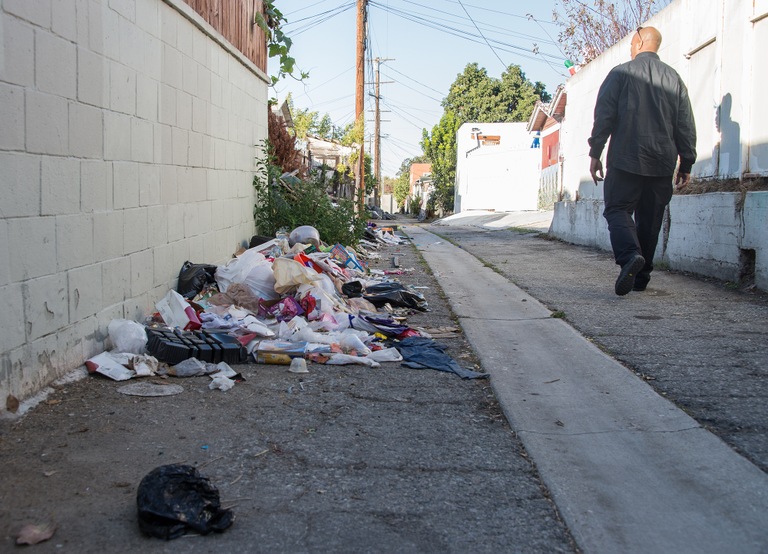 FBI Los Angeles Assistant Special Agent in Charge Robert Clark walks through a trash-strewn alleyway in a gang-plagued neighborhood. The FBI partners with multiple agencies on a variety of initiatives designed to dismantle gangs as well as help communities.

In Los Angeles and the sprawling metropolitan area that surrounds the city, there are approximately 800 different gangs, each of them engaged in various levels of violence and criminal activity.

“There was a time when we talked about gangs in terms of individuals standing on street corners selling rocks of crack cocaine,” said Robert Clark, an assistant special agent in charge in our Los Angeles Division who supervises the Bureau’s gang program there. “But the threat has evolved,” he said. “We now have gangs that are involved in regional, national, and international criminal enterprises.”

There are still open-air drug markets in certain neighborhoods, Clark explained, but the gangs have grown more sophisticated, branching out to extortion, money laundering, identity theft, and human trafficking. All of that can exact a heavy toll on the community.

To counter the threat, the FBI partners with local and state law enforcement organizations and numerous federal agencies. Through a variety of task forces and intelligence platforms, the goal is to leverage all of law enforcement’s resources to dismantle the worst gangs from the top down.

“The most significant threats that impact the communities—the shootings, murders, and robberies—are easy to see,” Clark said. “But we also look at the entire criminal enterprise, the infrastructure that allows gangs to control neighborhoods and extort and intimidate people who live there.”

Intelligence gathering and sharing is critical to law enforcement’s success, Clark noted. “And good intelligence happens when you have strong partnerships.” The Bureau’s international gang investigations may be helped by intelligence gleaned from a local gang case. “We may be able to recruit new sources or open new investigations based on what we learn locally,” he said.

And the information flows both ways. The Los Angeles City Attorney’s office, for example, is able to fight the gang threat through a unique initiative that benefits from its partnership with the FBI.

The city attorney’s office obtains injunctions requiring property owners to implement improvements to properties. They can also obtain court orders that prohibit gang members from setting foot back in the neighborhood. “If they come back,” Cristall added, “they can be arrested on sight.”

In the civil courts, the city attorney often moves against gang members and the properties they control on the same day the FBI makes criminal arrests. That requires close coordination—and the Bureau’s willingness to share sensitive information about its operations. “Today, we work with many of the federal law enforcement agencies,” Cristall said. “But one of the first agencies to bring us on board as a trusted partner was the FBI.”

He added that when his office first started this type of work, “there were so many spots in L.A. where the gangsters felt like they owned that neighborhood. Those areas are harder to find now,” said Cristall. “The remarkable progress we’ve made has to do with partnerships, and the FBI has been a leader in bringing us together.”

Clark sees the abatement program as one more tool in law enforcement’s fight against gangs. “Collectively, when we apply all of our resources,” he said, “we can bring justice to the people in communities hard hit by gangs.”

Next: Working to make a difference.

Our series looks at Andrew Cunanan, who murdered fashion icon Gianni Versace in 1997.

After 20 years of service, a U.S. sailor aimed to sell top secret information to the Russians.