The FBI today announced the addition of Ruja Ignatova to its Ten Most Wanted Fugitives list. Ignatova is being sought for her alleged leadership of a massive fraud scheme that affected millions of investors worldwide. The FBI is offering a reward of up to $100,000 for information leading to her arrest.

In approximately 2014, Ignatova and her partner founded OneCoin, a Bulgarian-based company that was marketed as a new virtual currency that would be the “Bitcoin killer.” Ignatova allegedly made false statements and representations about OneCoin to draw people to invest in OneCoin packages. According to investigators, Ignatova and her partner also promoted OneCoin through a multi-level marketing strategy that urged OneCoin investors to sell additional packages to friends and family.

Ignatova capitalized on the excitement surrounding cryptocurrencies to draw in new investors. While the company is said to have used many of the terms associated with virtual currencies, investigators believe that OneCoins were not mined in the way traditional to cryptocurrencies. In addition, the value of OneCoin was determined by the company rather than market demand. 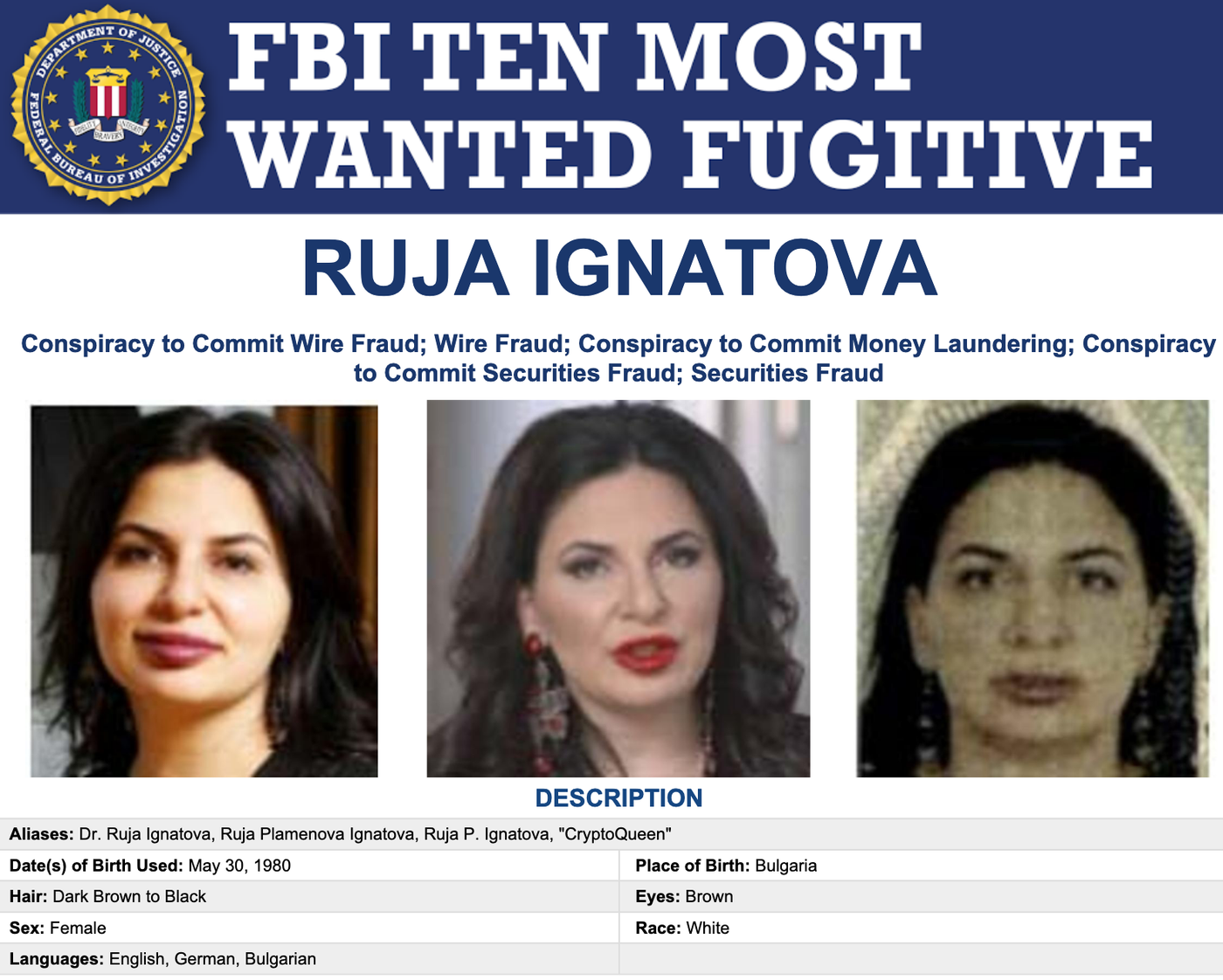 “OneCoin claimed to have a private blockchain,” said Special Agent Ronald Shimko, who is investigating the case out of the FBI’s New York Field Office. “This is in contrast to other virtual currencies, which have a decentralized and public blockchain. In this case, investors were just asked to trust OneCoin.”

Throughout the scheme, OneCoin is believed to have defrauded victims all over the world out of billions. Shimko said Ignatova targeted individuals who may not have fully understood the ins and outs of cryptocurrencies but were moved by Ignatova’s impressive resume and the marketing strategies used by OneCoin.

On October 12, 2017, Ignatova was charged in the U.S. District Court for the Southern District of New York and a federal warrant was issued for her arrest. Investigators believe Ignatova may have been tipped off that she was under investigation by U.S. and international authorities. She traveled from Sofia, Bulgaria, to Athens, Greece, on October 25, 2017, and has not been seen since.

Shimko hopes that the publicity of the Ten Most Wanted Fugitives list will bring more awareness to the case. “There are so many victims all over the world who were financially devastated by this,” Shimko said. “We want to bring her to justice.”

“There are so many victims all over the world who were financially devastated by this. We want to bring her to justice.”

Ignatova is only the 11th woman to have been selected to be on the FBI’s Ten Most Wanted Fugitives list in its 72-year history. She is currently 42 years old and has brown eyes and dark brown to black hair. Investigators, however, believe she could have altered her physical appearance.

Ignatova speaks English, German, and Bulgarian. She may be traveling on a fraudulent passport and has known connections to Bulgaria, Germany, Russia, Greece, and the United Arab Emirates. Shimko noted that before she disappeared, Ignatova lived a lavish lifestyle.

If you have any information about the whereabouts of Ruja Ignatova, please contact your local FBI office or the nearest American Embassy or Consulate. Tips can be reported anonymously and can also be reported online at tips.fbi.gov.

Retired Special Agent Paula Smith and her brother, Steve, a former NASA astronaut, share the story of how the FBI flag made it to space.

As part of our ongoing efforts to address violent crime nationally, the FBI and our partners made several key arrests around the country recently.