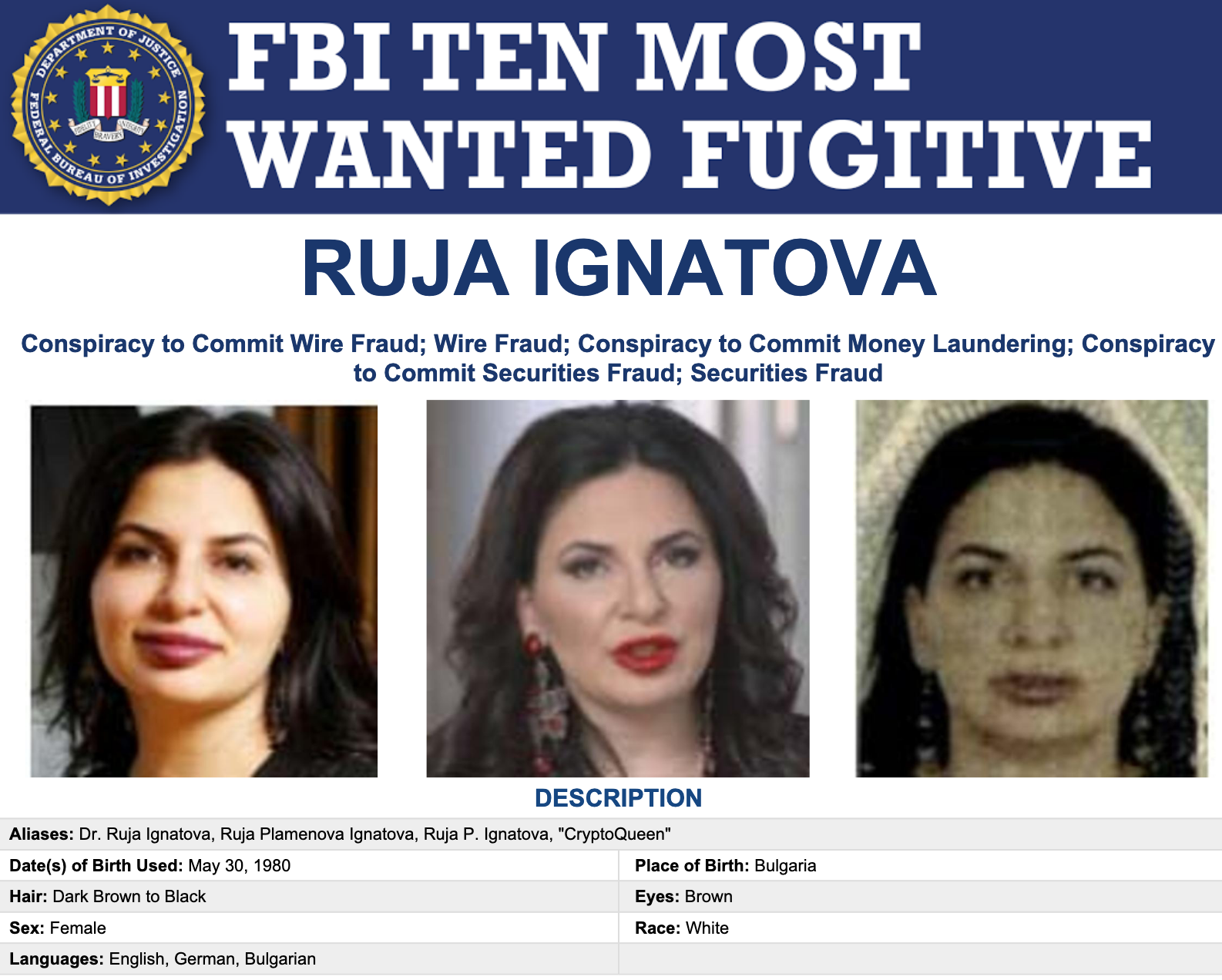 
Inside the FBI: Ten Most Wanted Fugitive Ruja Ignatova

Ruja Ignatova: OneCoin is easy to use. OneCoin is for everyone. Make payments everywhere, everyone, globally. And this is who we are. Global citizens of a small world, wanting to make a change.

Monica Grover: That was Ruja Ignatova, talking back in 2016. Known as the CryptoQueen, she’s not only the co-founder of OneCoin ... but she’s also a recent addition to the FBI’s Ten Most Wanted Fugitives List.

On this episode of Inside the FBI, we’ll learn how Ignatova, through a company once marketed as the “Bitcoin killer,” didn’t change the world ... but instead robbed investors of billions of dollars.

I’m Monica Grover, and this is Inside the FBI.

In approximately 2014, Ruja Ignatova and her partner founded OneCoin, a Bulgarian-based company that was marketed as a new virtual currency but was allegedly a fraud scheme from the start. It hinged on getting investors—eager to get into the cryptocurrency space or maybe expand their cryptocurrency portfolio—to buy in.

Ignatova used a number of tactics to gain investors.

First, she targeted people who may not have fully understood the ins and outs of cryptocurrencies but were moved by her impressive resume, OneCoin's marketing strategies, and the excitement surrounding cryptocurrencies.

As part of that, OneCoin is said to have used many of the terms associated with virtual currencies but not the actual practices.

For example, investigators believe that OneCoins weren’t mined the way cryptocurrencies usually are, which is through computer resources.

But OneCoin’s alleged private blockchain let only OneCoin—and not the investors—see any of the transactions. Basically, OneCoin the company served as the only regulator of the currency. And the value of the cryptocurrency was determined by the company rather than market demand.

Iganovta succeeded in her scheme to recruit OneCoin investors. At that 2016 appearance in London, she bragged about the company’s user base:

Ignatova: You all know, since we mined our first coin in January 2015, our growth exploded. Sebastian and Kari showed us the numbers. Today, over two million users. Users means active users. Our database has easily more than 12 million entry points. But this two million are active users. And no other cryptocurrency has as many users as we do.

Grover: But those users, and others that came on board in later years, had no real way to track their OneCoin or the transactions across the currency.

At the end of the day, their OneCoin investments were worthless, and together, they lost the equivalent of more than 4 billion U.S dollars.

Just like with any type of scam, we always warn the public to be wary of secrecy. Any “investment” that is secretive in nature is probably a scam.

Additionally, investing your money based on someone’s personal talent or charisma, rather than underlying facts, is also a warning sign that you may be falling victim to a scam.

On October 12, 2017, Ignatova was charged in connection with the OneCoin fraud scheme, and a federal warrant was issued for her arrest. Investigators believe she may have been tipped off that she was under investigation. She traveled from Sofia, Bulgaria, to Athens, Greece, on October 25, 2017, and has not been seen since.

Ignatova is only the 11th woman on the FBI’s Ten Most Wanted Fugitives list, which was created in 1950.

She’s currently 42 years old and has brown eyes and dark brown to black hair. However, investigators believe she could have changed her physical appearance.

Ignatova speaks English, German, and Bulgarian. She may be traveling on a fraudulent passport and has known connections to Bulgaria, Germany, Russia, Greece, and the United Arab Emirates. She’s known to have lived a lavish lifestyle.

For additional information about Ignatova, including photos and video, visit fbi.gov/topten. If you have any information about Ruja Ignatova, contact your local FBI office or the nearest American embassy or consulate. You can also report tips online at tips.fbi.gov. Tipsters can remain anonymous.

This has been another production of Inside the FBI. You can follow us on your favorite podcast player, including Spotify, Apple Podcasts, or Google Podcasts. You can also subscribe to email alerts about new episodes at fbi.gov/podcasts.

I’m Monica Grover from the FBI’s Office of Public Affairs. Thanks for tuning in.