Jose Rodolfo Villarreal-Hernandez, wanted for allegedly directing his associates to track and murder a man in Southlake, Texas, has been added to the FBI’s Ten Most Wanted Fugitives list. The Department of State’s Transnational Organized Crime Rewards Program is offering a reward of up to $1 million for information leading directly to his arrest.

Villarreal-Hernandez, also known as “El Gato,” is believed to hold an active leadership position in the Beltran Leyva Drug Trafficking Organization within the region of San Pedro Garza Garcia, Nuevo Leon, Mexico. He is also believed to be responsible for numerous murders in Mexico.

The victim of the Texas murder, 43, was shot while sitting in the passenger seat of his vehicle outside an upscale shopping center in a Dallas-Fort Worth suburb on May 22, 2013. His wife was standing near the driver’s side door when her husband was killed. And the brazen ambush occurred in the early evening hours, while the center was full of shoppers.

According to evidence and testimony gathered in the trials of those accused of tracking and killing the man, Villarreal-Hernandez ordered and financed a multi-year effort to find and watch the victim and then kill him. Investigators believe Villarreal-Hernandez had a long-standing personal grudge against the victim. 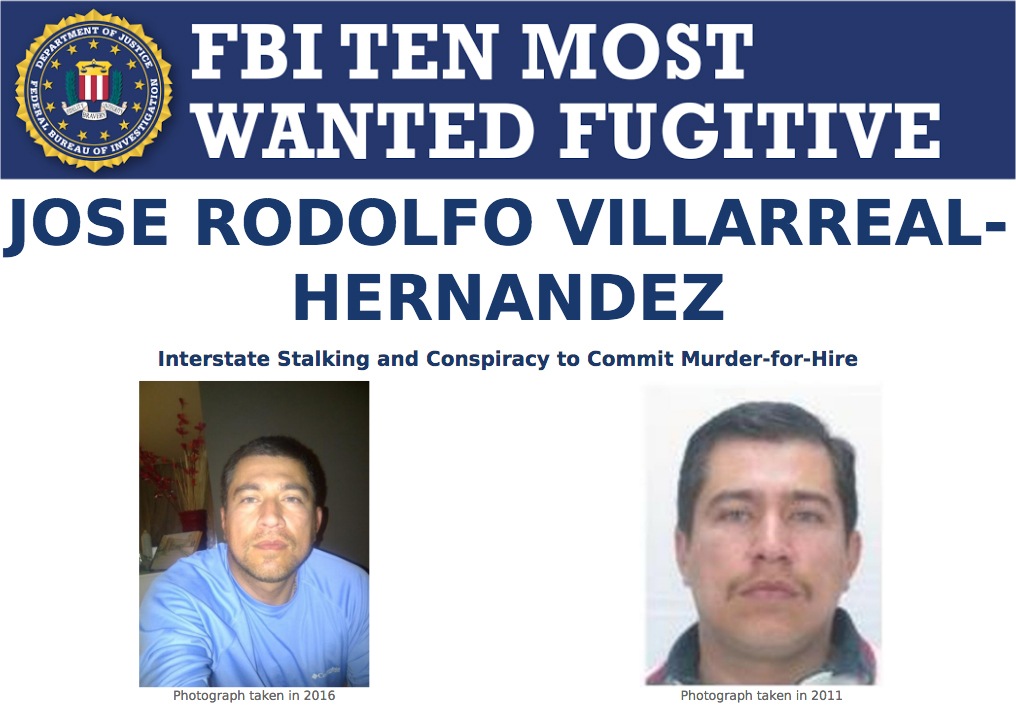 Several of the individuals involved in tracking and killing the victim have already pleaded guilty, have been tried and convicted, or are awaiting trial in federal court.

“The fact that Villarreal-Hernandez was willing to send people to the United States to track someone within the United States and then execute that person in a neighborhood in Texas—we need to set the example that this will not be tolerated,” said Special Agent Gary Koenig.

Koenig has been investigating Villarreal-Hernandez with the FBI’s Dallas Field Office since the shooting occurred in 2013. El Gato’s apparent role in trafficking drugs into the United States and the evidence linking him to more than 10 murders in Mexico have made this case a top priority for both U.S. and Mexican authorities. “He’s a ruthless guy,” Koenig said.

The FBI and Mexican authorities feel the publicity of the Top Ten list and such a large reward will help generate the tips they need to bring El Gato to justice.

Villarreal-Hernandez is 42 years old. He has black hair and brown eyes and stands 5 feet 4 inches tall. He is believed to weigh about 165 pounds and is likely hiding in Mexico. Villarreal-Hernandez should be considered armed and extremely dangerous.

Anyone with information on Villarreal-Hernandez’s whereabouts should call 1-800-CALL-FBI, or contact your local FBI office or the nearest American Embassy or Consulate. You can also submit a tip online to tips.fbi.gov.

The case of a Florida man who was sentenced to 60 years in prison for victimizing a teenager online highlights the growing crime of sextortion and its devastating real-life consequences.

Twenty-five years after the derailment of Amtrak's Sunset Limited passenger train in Arizona killed the conductor and injured dozens of passengers, investigators are still trying to find answers—and justice for the victims.