Michael Lum was a student at Arizona State University when he learned that a train had mysteriously derailed in rural Arizona on October 9, 1995.

“I woke up and saw it on the news, and I went to class and we talked about it,” Lum recalled.

Twenty-five years later, Lum, a special agent in the Federal Protective Service, is on an FBI task force working to find anyone responsible for the derailment that killed the train conductor and injured dozens more. No one has been arrested, but the FBI continues to investigate.

Amtrak’s Sunset Limited was traveling from El Paso to Los Angeles when, while crossing a bridge, it ran over an altered track in a rural area 70 miles outside of Phoenix. Around 1:35 a.m., the train slowed down as it crossed the track, but momentum and the train’s weight sent it careening into a ravine, Lum said.

The conductor was thrown from the train and died. Of the 258 passengers on the train, 12 had serious injuries, and about 100 had minor injuries.

“There were young children and elderly people on board. Some of the victims said this really ruined their lives—they had PTSD, serious injuries,” Lum said. “These victims were deeply affected.”

The crash site was so rural that investigators and rescuers had a challenging time even reaching the passengers. Makeshift roads were built to get rescuers in and out of the area. And in an era before cell phones and GPS were common, rescue teams formed convoys so they wouldn’t get lost trying to find the victims.

Investigators at the scene at the time found a note claiming responsibility and expressing anti-government sentiment. But investigators have not yet found those responsible.

“This was just six months after the Oklahoma City bombing, it was fresh on everyone’s minds. People were on edge,” Lum said.

The passage of 25 years has not dampened the investigators’ resolve to find the truth. The public regularly calls with tips.

“We’re reexamining evidence with new technology, and the public continues to provide leads that we’re tracking down,” he said.

Lum emphasized that the investigative team is committed to getting justice for the victims, especially the family of the conductor who lost his life.

“The crew and passengers were just innocent people going about their lives. They were minding their own business, sleeping in the middle of the night,” Lum said. “We want to make sure anyone responsible has to answer for this crime.” 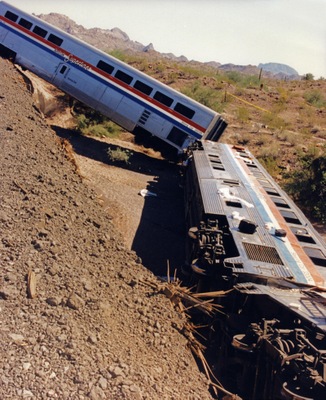 If you have tips or information on the October 9, 1995 derailment of the Sunset Limited, visit tips.fbi.gov or call the FBI’s Phoenix Field Office at (623) 466-1999. A reward of up to $310,000 is available for information leading to the arrest and conviction of the individual(s) responsible for the crime.

A Joint Criminal Opioid and Darknet Enforcement (JCODE) investigation in Los Angeles exemplifies the teamwork and tenacity required to uncover the people behind drug operations that run through a network prized for its encryption and anonymity.