Help Us Catch a Sexual Predator 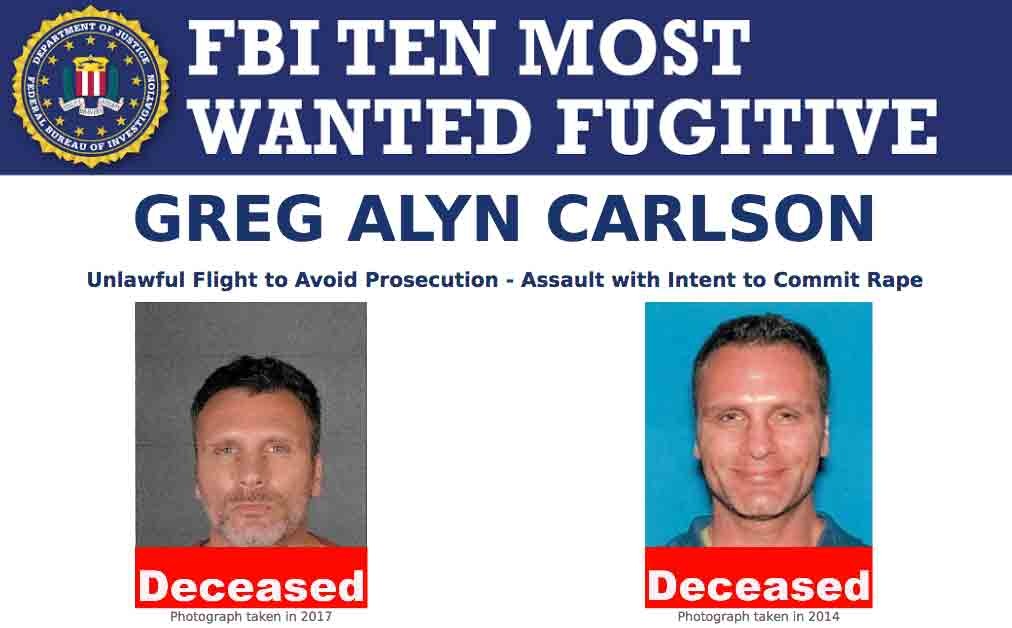 A California man wanted for his alleged involvement in multiple armed sexual assaults has been named to the FBI’s Ten Most Wanted Fugitives list, and a reward of up to $100,000 is being offered for information leading to his capture.

Greg Alyn Carlson is charged with a 2017 burglary in Los Angeles that turned into a violent sexual assault against the female resident. “This individual is a serious threat to the community,” said Special Agent Scott Garriola, a member of the FBI’s Los Angeles Fugitive Task Force. “Investigators have also linked him through DNA to sexual assaults dating back to 2003.”

Carlson was arrested by local authorities on September 3, 2017 for the Los Angeles attack and charged with burglary, assault with intent to commit rape, and assault with a deadly weapon. Three weeks later, he posted bond, was released, and fled.

Carlson went to a family home in Mount Pleasant, South Carolina, and left there with a stolen handgun, a rental car, and a significant amount of cash. In November 2017, he was spotted in Hoover, Alabama, where he led police on a high-speed chase that was ultimately called off because it posed a danger to the public. A week later, the fugitive was seen in the Florida towns of Jacksonville and Daytona Beach.

“He’s got some familiarity with Florida, but he could be anywhere,” Garriola said. “He has a lot of cash, and he’s indicated that he will not turn himself in. We need the public’s assistance to help apprehend him.”

Investigators are having difficulty developing a profile of Carlson—which could provide clues to his patterns of behavior and movements—because little is known about him. “So far, we haven’t been able to pin down what he did to earn money,” Garriola said. “It’s likely he had some family money.”

“This man is a woman’s worst nightmare. He is the prowler who breaks in at night and violently sexually assaults his victims.”

Believed to be 46 years old, Carlson previously lived in Redondo Beach, California. He is probably still in possession of the stolen handgun, Garriola said, and should be considered extremely dangerous. He was traveling in a stolen white, four-door 2017 Hyundai Accent rental car with South Carolina license plate NKI-770. He is 5’11” and weighs approximately 170 pounds, and has brown hair and green eyes.

Carlson is one of the few criminals named to the Ten Most Wanted Fugitives list who is not wanted for murder, but Garriola stressed that he is a violent individual. “This man is a woman’s worst nightmare,” he said. “He is the prowler who breaks in at night and violently sexually assaults his victims.”

Garriola added that the publicity associated with being named to the list will give the case wide media exposure around the country, which could not only result in Carlson’s capture but also help investigators identify additional victims.

“I think there are more victims out there,” Garriola said, adding, “Carlson has demonstrated a pattern of violent crimes against women stretching over a period of years. There is no reason to think he will stop until we catch him.”

If you have information regarding Greg Alyn Carlson, please contact your local FBI office or the nearest U.S. Embassy or Consulate, or submit a tip online.

Cybersecurity is everyone’s responsibility, and this month serves as a reminder that each of us has a part to play in making the Internet safer and more secure.