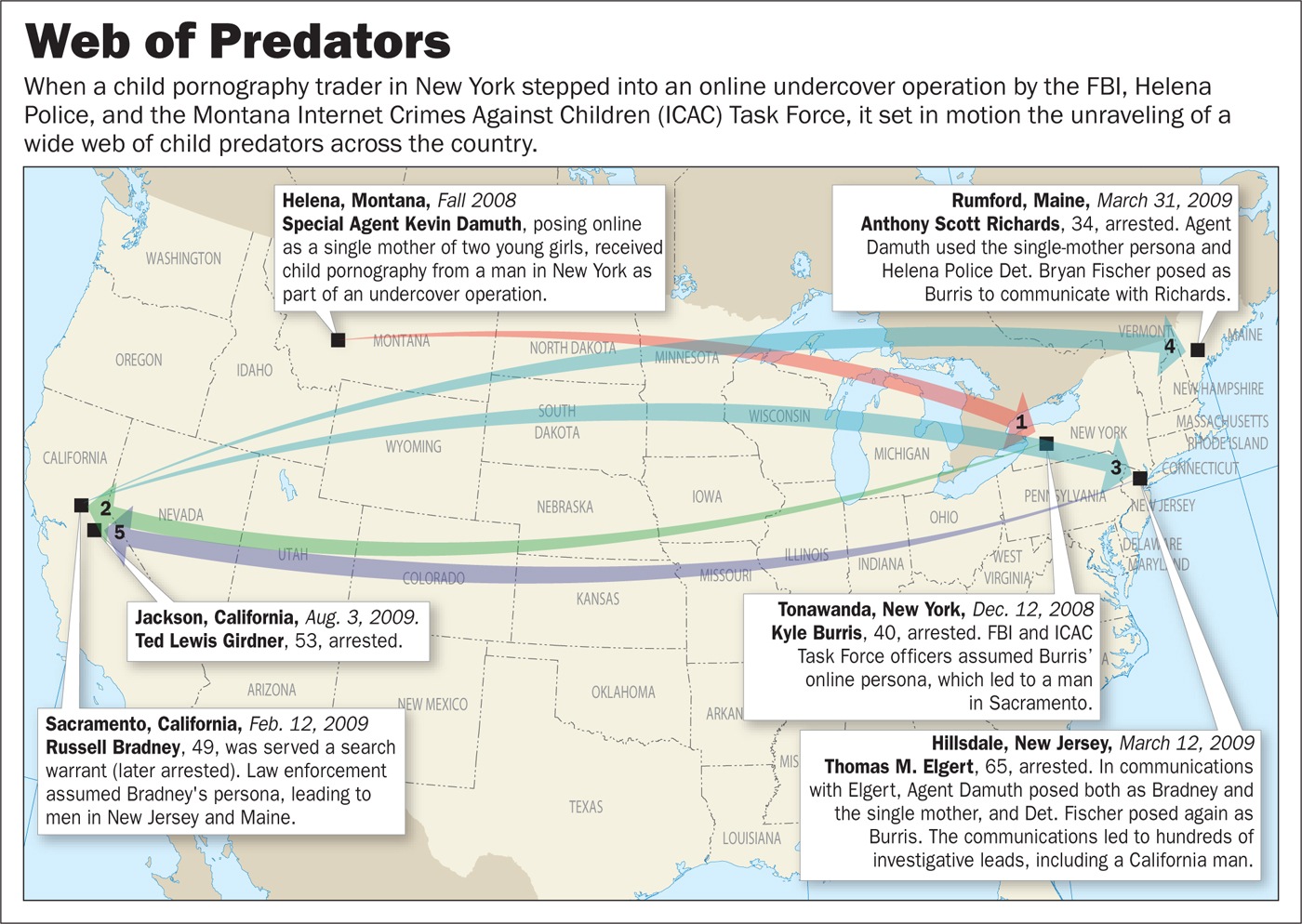 When Kyle Burris struck up a conversation with a single mother of two young daughters in an online chat forum in 2008, he could not have imagined the direction it would take. What he thought was going to happen was this: he’d send the Montana woman some images of child pornography and she would reciprocate with pictures of her own kids being molested. So sure was Burris that this scenario would play out, he e-mailed images to the woman during their very first chat, and over the next few weeks began making plans to travel from New York to Montana.

What he did not expect was that the “woman” was Special Agent Kevin Damuth of the FBI’s resident agency in Helena, one of 10 Montana satellite offices under the umbrella of the Salt Lake City Field Office in Utah. Like most agents in the FBI’s approximately 380 resident agencies, Damuth is a generalist, equally aplomb at handling white-collar and violent crimes, fraud, and cyber crimes. In recent years, however, working with the Helena Police Department on the Montana Internet Crimes Against Children (ICAC) Task Force, he has developed a unique skill in snaring child pornographers, whose use of the Internet makes rural Montana as susceptible to predators as any big city.

“That’s the thing about Montana,” says Damuth, an agent of almost 13 years, most of them in Helena. “Not only are things happening here, there’s almost always a nexus outside of the state.”

In the Burris case, agents from Helena and the ICAC Task Force in Buffalo, New York arrested the 40-year-old man in December 2008. He was prosecuted in Montana, where authorities received consent to take over his online identity and link up his circle of acquaintances. This is where a larger web came into focus.

“It spun off across the country,” Damuth says.

Helena Police Department Detective Bryan Fischer assumed Burris’ identity and quickly honed in on Russel Bradney of Sacramento. Under the guise of Burris, Det. Fischer traded messages with Bradney and collected evidence. Meanwhile, the FBI in Sacramento was already making a case on Bradney and discovered he was trading child pornography with Thomas Elgert of New Jersey. Agents and ICAC officers in Sacramento moved on Bradney. Then Agent Damuth in Montana took over Bradney’s identity, continuing the correspondence with Elgert in New Jersey and another man, Anthony Richards, in Maine.

At this point, Det. Fisher was still undercover as Kyle Burris, and Agent Damuth was continuing the personas of both Bradney and the single mother in Montana. When Elgert got word from Bradney’s account about a Montana woman and her two daughters, he expressed interest.

“I was communicating with him at both ends,” Agent Damuth recalls.

In March 2009, the FBI and ICAC officers arrested Anthony Richards in Maine. Damuth and agents in Newark arrested Elgert two months later, but not before linking him to yet another child pornographer, Ted Girdner, in California. He was arrested in August 2009.

A cadre of state and federal officers and agents on the Innocent Images National Initiative Task Force and the Montana ICAC Task Force played essential roles, Damuth says. All the suspects received hefty prison sentences. Meanwhile, untold numbers of victims remain unidentified, the exact origins of their images unknown. Montana has its own share of homegrown cases, but Damuth and Fisher are never surprised when a trail leads far beyond their borders.

“When we get stuff like this it can go wherever,” says Det. Fischer. Adds Damuth, “Nothing surprises me anymore.”