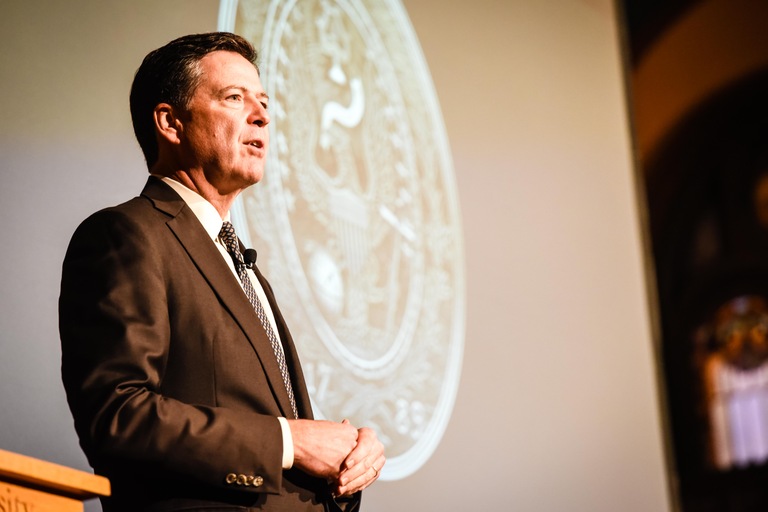 FBI Director James B. Comey speaks to Georgetown University students, alumni, and faculty members following a screening of the documentary "Chasing the Dragon: The Life of an Opiate Addict" on September 21, 2016 in Washington, D.C. Comey joined Attorney General Loretta Lynch and Acting DEA Administrator Chuck Rosenberg for a panel discussion on opioid addiction that evening.

Georgetown University students, alumni, and faculty gathered Wednesday in the campus’ historic Gaston Hall in Washington, D.C., for a special screening of the documentary Chasing the Dragon: The Life of an Opiate Addict.

Released by the FBI and the Drug Enforcement Administration (DEA) earlier this year, the film focuses on educating young adults about the dangers of opioid addiction. The 45-minute documentary—the title of which refers to the never-ending pursuit of the original or ultimate high—features stark first-person accounts by individuals who have abused opioids, or whose children have abused opioids, with tragic consequences.

While the FBI and the DEA have had success working with law enforcement across the country to target drug suppliers and dealers, demand has continued to grow. In response, the two agencies created Chasing the Dragon to bring awareness to the growing epidemic of prescription opiate and heroin use.

Following the film screening, FBI Director James Comey spoke to audience members about the severe impact opioid addiction has had in America. He shared the efforts undertaken by the FBI and DEA to disrupt distributors, gangs, cartels, and corrupt doctors who are driving the issue, but stressed the challenges the two agencies face in stemming drug demand.

“We recognize you can’t arrest your way out of any kind of problem,” Comey said on Wednesday, “so we want to become part of the solution by raising awareness and hoping to steer good people away from something that will swallow their lives.”

Acting DEA Administrator Chuck Rosenberg also joined Comey Wednesday evening and shared sobering statistics about opioid addiction in the country. He said that the United States would lose 47,000 people in 2016 to a drug overdose.

“We know that the path from abusing pills to using heroin is not just correlative, but causative,” Rosenberg said. “We have about 589 new heroin users every single day in the United States. Four out of five started on pills.” 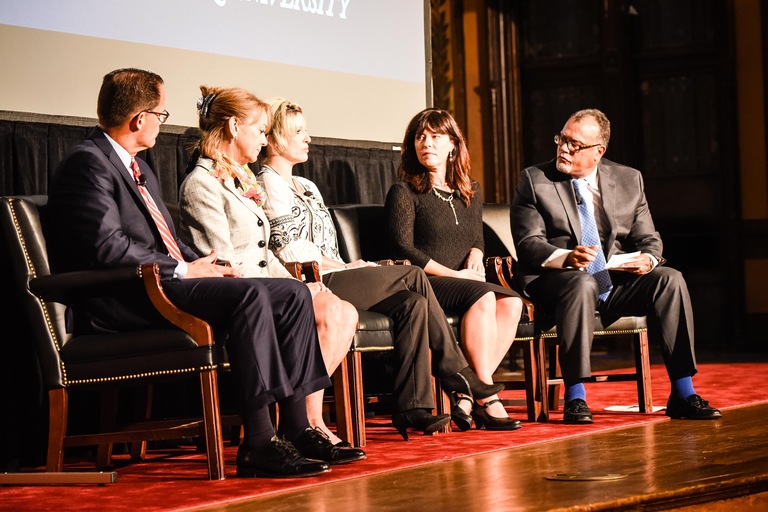 A panel discussion, which included a Georgetown opioid researcher and a mother who lost her son to a heroin overdose at age 19, followed remarks by FBI Director James Comey and Acting DEA Administrator Chuck Rosenberg at the "Chasing the Dragon" screening.

Comey and Rosenberg’s remarks were followed by additional panel discussions, which included a Georgetown opioid researcher as well as a mother who lost a child to a heroin overdose. Gina Woodward’s story about her 19-year-old son Tyler was similar to the first-person accounts in the film, which is why she wanted to share it at the screening.

“I want to be his voice, and I know because of his heart that he would want me to help other people,” Woodward said.

The Georgetown University event was held in conjunction with Prescription Opioid and Heroin Epidemic Awareness Week, which was proclaimed by President Obama on Friday, September 16, 2016. Part of the proclamation included efforts being made by the federal government and law enforcement to help get more people into treatment instead of jail.

“We have about 589 new heroin users every single day in the United States. Four out of five started on pills.”

Chasing the Dragon: The Life of an Opiate Addict