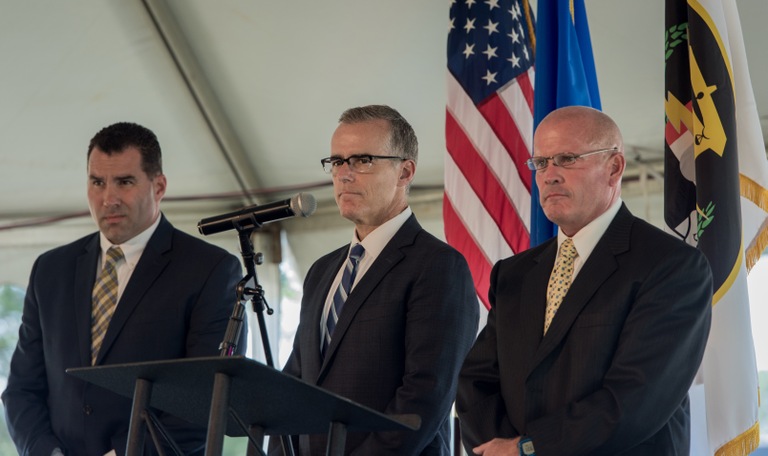 FBI Deputy Director Andrew McCabe (center) was on hand at Redstone Arsenal in Huntsville, Alabama yesterday for the transition ceremony in which the FBI assumed primary responsibility for the Hazardous Devices School. Also participating from the Bureau were John Selleck, deputy assistant director for the Critical Incident Response Group (left), and Jeff Warren, director of the Hazardous Devices School.

After a 45-year partnership with the U.S. Army, the FBI formally accepted primary responsibility for the Hazardous Devices School at Redstone Arsenal in Huntsville, Alabama, the facility that trains and certifies every one of the nation’s public safety bomb technicians.

The transition of responsibility ceremony, which occurred September 21—less than a week after homemade bombs exploded in New York and New Jersey, injuring 29 people—underscores the critical role the Hazardous Devices School (HDS) plays in the country’s national security. Some of the unexploded devices in last weekend’s incident were rendered safe by local bomb techs who received their training at the HDS.

“The bombing events in New York and New Jersey are a testament to the challenges faced by bomb technicians daily—and an unfortunate reminder of a threat that is both evolving and enduring,” noted FBI Deputy Director Andrew McCabe, who was on hand at Redstone Arsenal for the transition ceremony along with other Bureau and Army officials.

McCabe explained that the FBI has an obligation to provide “the best possible tools and training” to local, state, and federal bomb technicians and that the Bureau plans to significantly expand and upgrade the HDS facility over the next several years. The expansion will include state of the art facilities and equipment, he said, to ensure that the HDS “remains the nation’s single source of certified training for bomb technicians.”

Established in 1971, the HDS has provided training to more than 20,000 local, state, and federal first responders and bomb techs. Currently the school trains and certifies approximately 200 new bomb techs each year from the 467 public safety bomb squads around the country, according to the school’s director, Special Agent Jeff Warren. The basic certification course provides six weeks of instruction, and each of the country’s 3,100 public safety bomb techs—which does not include the military’s explosive ordnance disposal (EOD) technicians—is required to be recertified at HDS every three years.

“We have to provide the very best training available. This is a no-fail mission.”

At the facility’s sprawling campus, training is provided in classrooms, explosives ranges, and in “villages” that include mock stores, churches, and apartment complexes that are designed to resemble the conditions bomb techs would face during life or death situations in the real world. In addition to certification and recertification programs, the school offers advance training in a variety of areas, including weapons of mass destruction and electronic and maritime countermeasures.

“The threat from terrorists and other criminals is ever changing,” Warren said, and now that the FBI has assumed primary leadership of the HDS, there is a greater responsibility on the Bureau to make sure the nation’s public safety bomb techs are prepared for whatever they might face in real life. “We have to provide the very best training available,” he said. “This is a no-fail mission.”

Although yesterday’s ceremony completed the transition of the HDS to the Bureau, McCabe pointed out that the Army will continue to play an important role in the school’s mission, “and the FBI looks forward to our continued partnership with the Army and the team at Redstone.”

The Crime in the United States, 2015 report reveals an increase in violent crime and a decrease in property crime when compared to 2014 data.