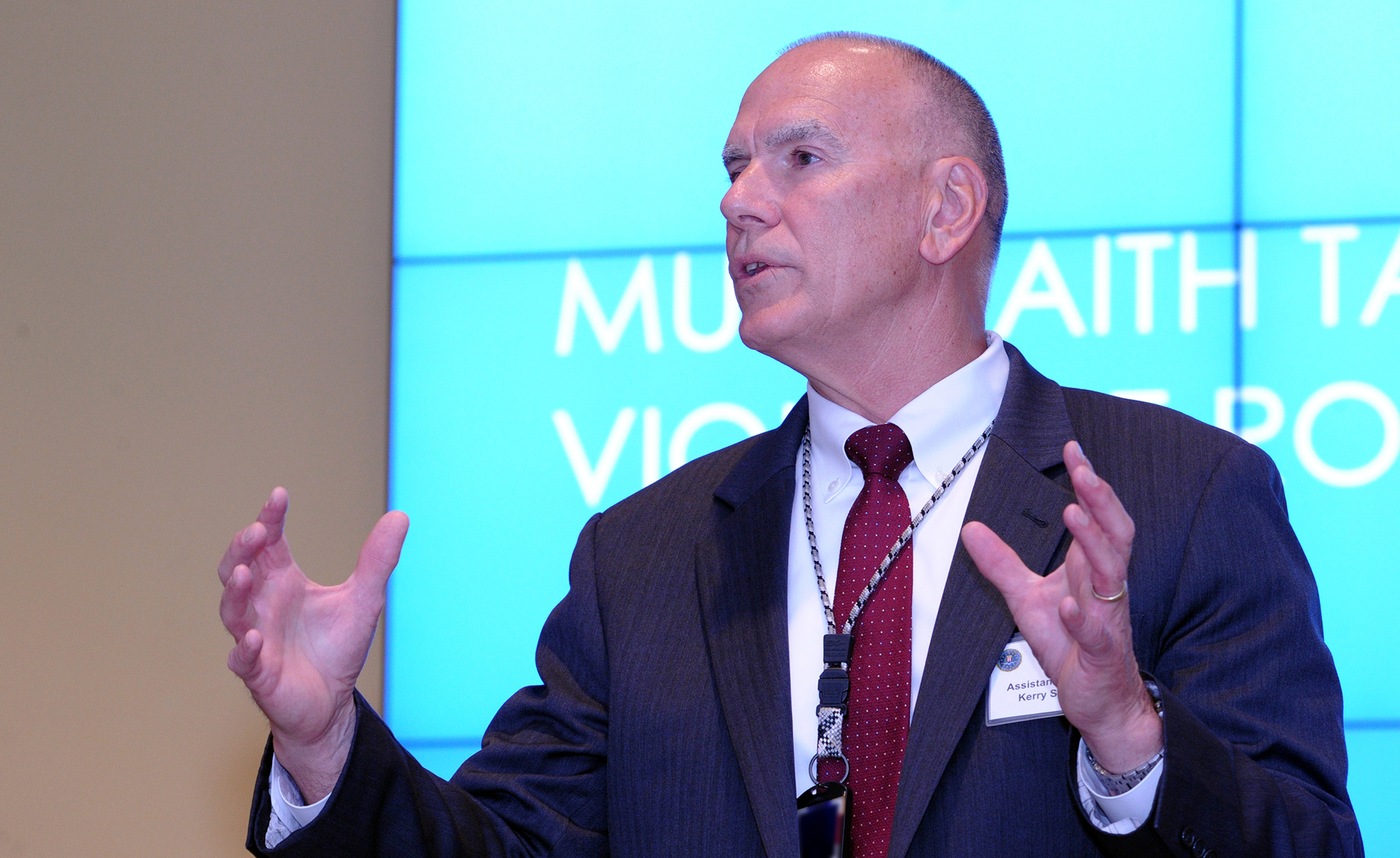 Assistant Director Kerry Sleeper of the FBI’s Office of Partner Engagement speaks at a meeting of faith leaders at FBI Headquarters Tuesday.

That’s how long it took a gunman who opened fire at a Baptist church in rural Sutherland Springs, Texas, to kill 26 people. Many in the church on November 5, 2017 took cover under the pews. Tragically, that made them an easier target for the gunman. The gunman later died by suicide after an armed passerby confronted him.

From Sutherland Springs to Pittsburgh to Poway, it’s becoming sadly common—worshippers gunned down during their religious services. Law enforcement and religious leaders met Tuesday at FBI Headquarters to discuss these threats and how to protect religious institutions. It was a conversation all parties wished wasn’t necessary.

"Everyone who attends a service deserves the right to do so in peace,” said Assistant Director Kerry Sleeper of the FBI’s Office of Partner Engagement. “That’s certainly our common goal here as we move forward.”

FBI officials briefed attendees on topics like hate crime and terrorism threats and warning signs for shooters. They shared in-depth case studies on the shootings at Sutherland Springs and on the attack on a Sikh temple in Oak Creek, Wisconsin, in 2012.

While the events may seem random, many shooters do show warning signs before they act. In the case of the Sutherland Springs shooter, the gunman had a troubled history; he had been court martialed in the military and had a history of domestic violence.

Officials encouraged religious leaders to remind their communities of the warning signs so they can be handled appropriately at the local level. Depending on the threat, sometimes a simple mental health treatment referral is all that’s required.

But when attacks happen, the FBI offers its resources to state or local law enforcement, who are usually the primary investigators. In Sutherland Springs, a rural community with a small sheriff’s office, the Texas Rangers led the investigation. The FBI offered its national-level resources to the small community, services such as evidence processing and victim services, said FBI San Antonio Assistant Special Agent in Charge Robert Krupa.

As with all crime scenes on religious grounds, the investigative team took steps to respect religious traditions and sensitivities.

"It’s still a sanctuary. It’s holy ground, and we treated it as such,” Krupa said.

While communities are concerned about violence, preparation does make a difference, attendees said.

Just a few weeks before the attack, a security review showed that emergency exits were blocked. Those exits were cleared before the attack. The synagogue’s rabbi didn’t typically carry a cell phone on the sabbath, but he agreed to do so after the security training. It was the rabbi who made the call to 911 when the shooting started.

“Many of them credit that training with helping save their lives,” Masters said.

The goal of the meeting is to kick off a national community of interest of faith leaders, so law enforcement can share threat information widely. Federal law enforcement agencies have similar channels with local police, the private sector, and school security personnel. After recent attacks on houses of worship, the FBI wants to expand that information sharing to faith leaders, Sleeper said.

In an interview after the meeting, Rev. Markel Hutchins, founder of One Congregation, One Precinct (ONECOP), an Atlanta-based organization that promotes police-community relationships, said the conversation is one congregants are eager to have.

“I think one of the benefits of this much-needed conversation is that the FBI and other agencies got a better sense of the enthusiasm that faith communities have to prepare themselves to prevent attacks,” said Hutchins.

In Tuesday’s presentation, FBI officials offered suggestions on steps religious institutions can take to protect themselves and their congregants:

Thanks to a multi-agency investigation, a bomber who placed six hoax and real bombs around a rural South Carolina community has been sentenced to federal prison.