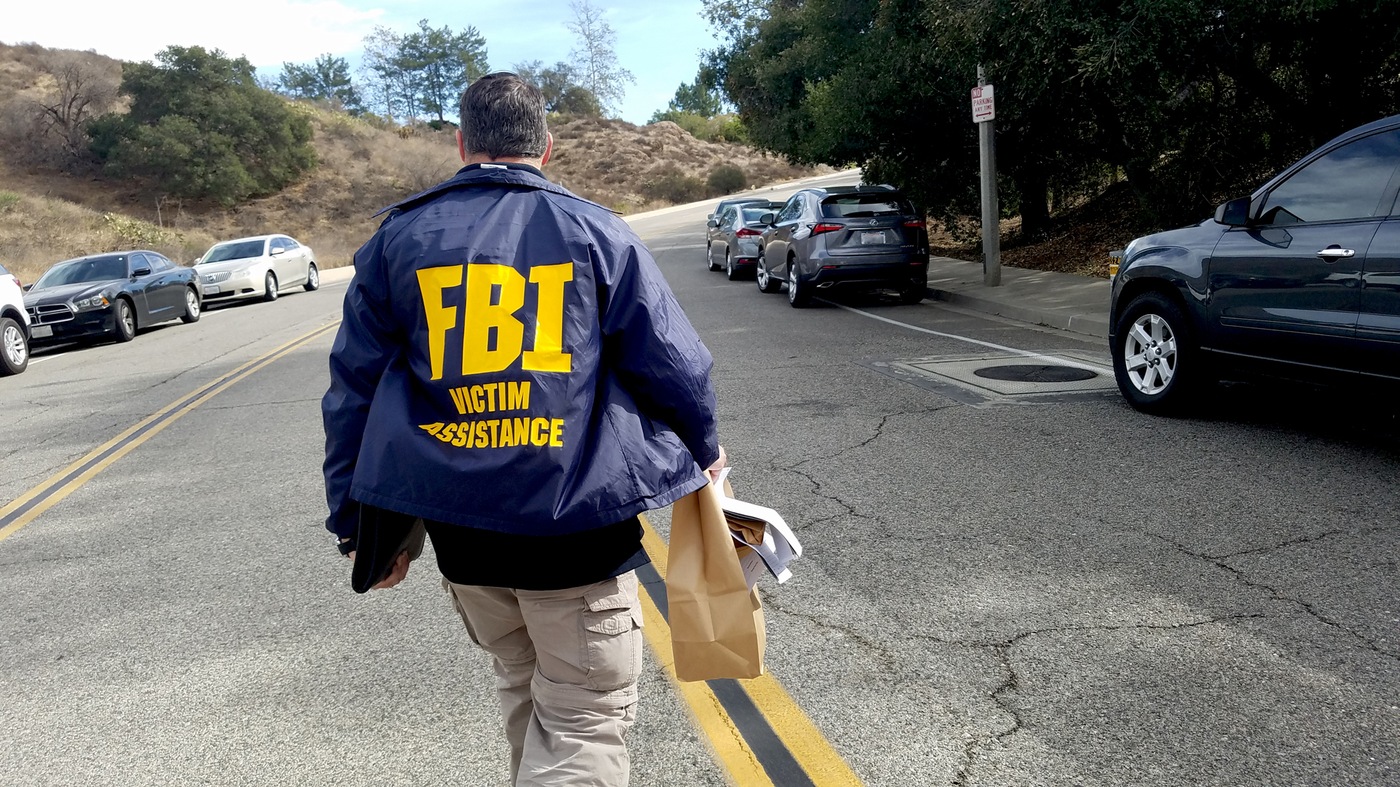 A VSRT member carries a bag of personal effects from the site of the November 2018 mass shooting at Borderline Bar and Grill in Thousand Oaks, California, to the nearby Family Assistance Center for collection by its owner.

When the special agent leading the FBI’s response to a church shooting in Sutherland Springs, Texas, arrived on the scene in 2017 to join local police in assessing the crisis—in which a gunman killed 26 people before being shot dead—he made quick determinations about which FBI assets to deploy.

Special agent bomb technicians and evidence response teams from the FBI’s San Antonio Field Office were already on scene supporting the Texas Rangers, the state law enforcement agency leading the investigation. Their job was to secure the crime scene, determine what happened, and collect evidence to support the investigation. And victim specialists from the nearest FBI office were already beginning to coordinate with local agencies in the rural area to support the victims and their families.

But it was quickly evident after the November 5, 2017, shooting that the sheer magnitude of the incident would require a surge of resources to assist survivors, witnesses, and the families of the injured and deceased. So Christopher Combs, the special agent in charge of the San Antonio FBI, called up what he described as one of the Bureau’s key “crisis assets”—the Victim Services Response Team (VSRT), a specially trained cadre of FBI personnel whose primary function is to address the needs of victims in mass casualty events.

This week, the Department of Justice’s Office for Victims of Crime (OVC) commemorates National Crime Victims’ Rights Week (April 7-13) to celebrate crime victim services that are increasingly more inclusive, accessible, and trauma-informed. The intent is to raise awareness of victims’ rights and services, highlight local programs, recognize progress achieved, and honor victims and the professionals who serve them.

The FBI’s VSRT, which includes victim specialists, agents, and analysts from around the country, was established in 2005 to provide support for victims in large-scale events. Team members generally work their regular jobs within the Bureau but are on call for events like Sutherland Springs or the mass shooting last October at a synagogue in Pittsburgh that left 11 dead.

Every April, the Department of Justice’s Office for Victims of Crime (OVC) leads communities throughout the country in their annual observances of National Crime Victims’ Rights Week.

This year, OVC will commemorate the week April 7 - 13. This year’s theme—Honoring Our Past. Creating Hope for the Future.—celebrates the progress made by those before us as we look to a future of crime victim services that is even more inclusive, accessible, and trauma-informed. Learn more﻿

Once on the ground for a deployment, the team engages with victims and families to assess their immediate needs and provides crisis intervention and other forms of emergency assistance. They work with local agencies to staff family assistance centers and support victims during investigative interviews. VSRT members also work closely with the Bureau’s Evidence Response Teams (ERTs) to collect, manage, clean, and return personal effects—items not considered evidence—collected from crime scenes.

“They’re as important to the active shooter response for the Bureau as the ERTs,” said Combs. He said the VSRT presence in Sutherland Springs meant his trained agents could focus all their attention on investigating the crime scene while a similarly trained team attended entirely to the victims. “To have a team that’s so specialized, I knew that they had just taken that entire piece off the table and were going to handle that for me,” Combs said.

The FBI’s Victim Services Division (VSD) manages the VSRT program and provides specialized training for team members, who serve three-year terms and are on call for a month at a time. Each deployment team includes a mix of victim specialists, agents, and analysts; the size of the team depends on the scope of the mass casualty event. The mass shooting in Las Vegas in October 2017, for example, required an unprecedented response because of the large number of victims, including 59 killed and more than 850 injured. Additionally, VSRT works with local agencies to reach out to people who were present but not injured at mass casualty events. They may be eligible to receive services, including counseling, and might also have information that can assist an investigation.

Since its inception in 2005 as the Victim Assistance Rapid Deployment Team, VSRT has responded to 24 mass casualty events, including the Boston Marathon bombing in 2013, the Pulse nightclub shooting in 2016, and the San Bernardino shooting in California in 2015. The team’s most recent response was last November, when 13 people were killed at the Borderline Bar and Grill in Thousand Oaks, California.

Aaron Rouse, special agent in charge of the FBI’s Las Vegas Field Office, said having an experienced team focused on serving victims—and all the logistics that entails—is a valuable component to an FBI response. The shooting on the Las Vegas strip occurred during a crowded outdoor concert, which led not only to a large number of casualties but also an enormous collection of personal effects that were left behind when people scrambled for safety. VSRT members worked with evidence collection teams to identify thousands of hats, phones, boots, chairs, and other personal items and match them with their owners.

“They understand better than most departments what’s going to have to be laid out in order for the victims to get the proper assistance,” Rouse said. “What they learned from Las Vegas was an evolution from the Pulse nightclub, from the Boston bombing, from San Bernardino. And in each one of these cases, we’re pushing envelopes that we didn't push before. And we’re getting a better understanding of what is it going to take to get a large group of people through this event.”

The Victim Services Division emerged out of the FBI response to the 9/11 attacks with a mission: to inform, support, and assist victims in navigating the aftermath of crime and the criminal justice process with dignity and resilience. VSRT’s role is to establish that mission on the ground as early as possible after an incident, to the benefit of victims and investigators. 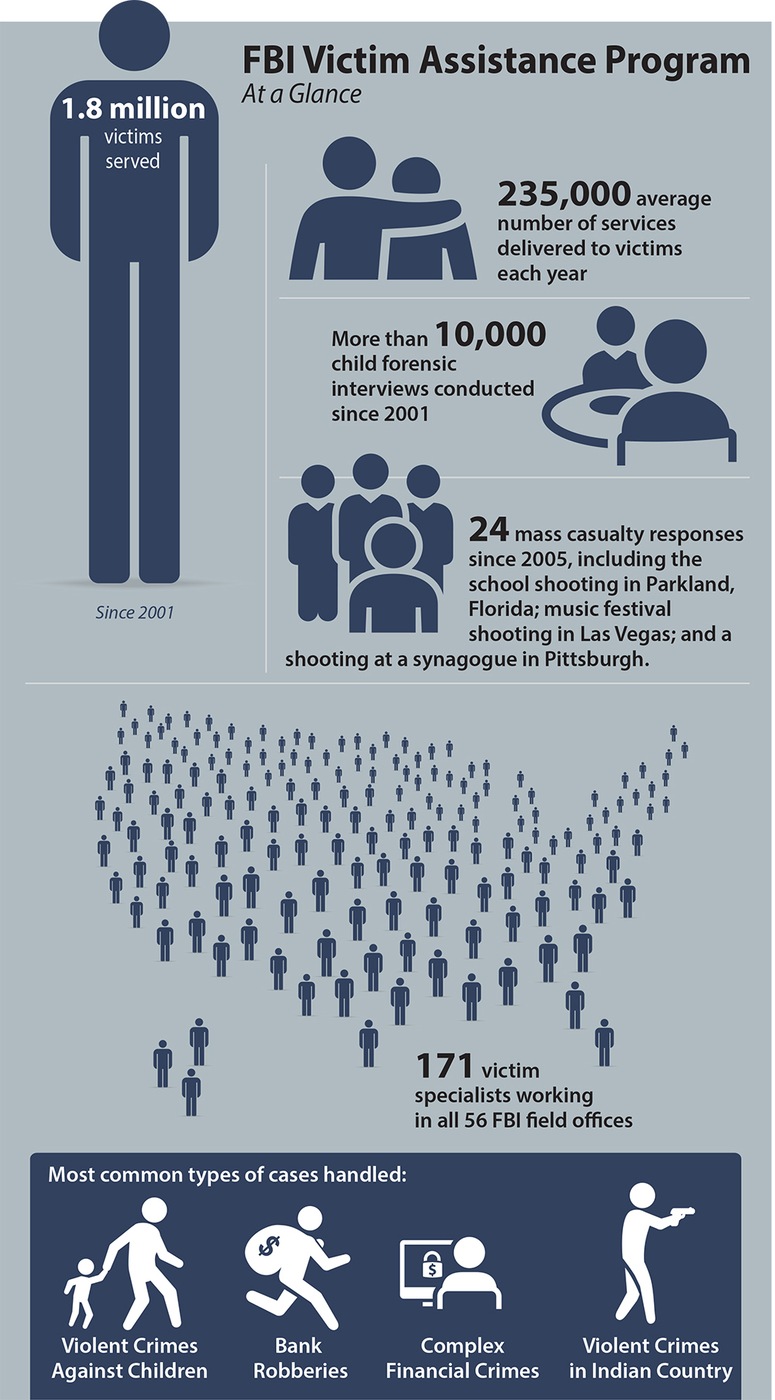 “I’m their biggest fan after Tree of Life,” said Robert Jones, special agent in charge of the Pittsburgh Field Office, referring to the synagogue where a gunman killed 11 people last October. He said it was essential that his agents focus solely on the investigation, particularly in the first few days. He said VSRT and its victim specialists were crucial to serving victims’ families in the days and weeks after the shooting.

“They want to know information,” Jones said. “They want to know about the progress of the case. They want to know when the bodies will be released. It’s almost a full-time job, and I think it’s hugely important. The victim specialists do a great job interfacing with the families. It’s a well-oiled machine and a critical interface between the Bureau and the public we serve.”

Thanks to a multi-agency investigation, the FBI and Department of Justice announced charges against 24 defendants who were allegedly part of a $1.2 billion fraud scheme against Medicare—one of the largest in U.S. history.

Thirty-five years after the bust of a vast, long-running Mafia drug conspiracy that touched four continents, the Pizza Connection case continues to pay dividends for partnerships, policing, and public safety.