Roadside Bomb Locations in South Carolina: Between January 24 and February 24, 2018, six hoax and actual bombs were placed around the rural community of Anderson, South Carolina. The map pinpoints above depict the location and description of each incident; the same information is also available in text form below.

A man and his daughter were driving down a rural highway in Anderson County, South Carolina, on January 30, 2018, when they noticed something odd—a glowing wicker basket in the middle of the road. The man stopped to examine the package. It exploded, causing minor burns to his leg.

Among the bomb remnants police found at the scene was a piece of paper with Arabic writing referencing Osama bin Laden, leading investigators toward a possible terrorism motive. Local, state, and federal law enforcement collected evidence and sent the bomb components to the FBI Laboratory in Quantico, Virginia, where experts looked for fingerprints, DNA, and other clues. The Laboratory’s experts provided on-scene investigators with a steady stream of actionable leads and information based on their findings.

The next day, after word of the incident got out, another resident called the Anderson County Sheriff’s Office to report he had seen a similar-looking device days earlier on a nearby bridge. He did not call police at the time, but he had taken photos of it with his cell phone. On February 4, another bomb-like object was found, placed in a black box with a letter that pledged allegiance to the Islamic State and said the community was no longer safe.

Police and the FBI then stepped up an already fast-moving investigation of what was now clearly a serial bomber.

“Every time we responded to a scene, we immediately provided evidence to the FBI Laboratory for analysis,” said Special Agent Tanya Evanina, who worked the case as part of the FBI Columbia Field Office’s Joint Terrorism Task Force (JTTF). “We also worked with local law enforcement to canvass the area, looking at surveillance footage and talking with local businesses about the component parts.”

As investigators hunted down leads, more than 10 days went by without another incident—but the bomber wasn’t finished. On February 15, another device was found, hidden inside a teddy bear. The teddy bear was left in a basket in the middle of the road.

“This was deliberately placed where a child or passerby could have found it. Fortunately, someone saw it and knew to call us,” said Special Agent Christopher Derrickson, a supervisor in the FBI Columbia JTTF.

Between January 24 and February 24, 2018, six hoax and actual bombs were placed around the rural community of Anderson, South Carolina. The map pinpoints above depict the location and description of each incident; the same information is also available in text form below.

January 24, 2018
A motorist noticed what appeared to be a jewelry-type box on the bridge. He took a photo with his phone, but assuming it was a hoax, did not call police until the January 30 bomb exploded.

January 30, 2018
A man and his daughter noticed an illuminated wicker basket in the road. When the man examined the box, it exploded, burning his leg.

February 4, 2018
A hoax bomb-like device was found in the road. It contained a typed letter that claimed responsibility.

February 15, 2018
A motorist called police to report a teddy bear inside of a basket in the middle of the road. Inside the box was a pipe bomb with nails. Bomb technicians disabled the bomb, and no one was injured.

February 18, 2018
A hoax bomb-like device was seen alongside the highway. Inside the box were handwritten threatening messages.

February 24, 2018
A bomb inside of a wooden box with Arabic writing was placed in the road. Bomb technicians disabled the bomb, and no one was injured.

With the bomber still out there and becoming more brazen, the FBI and its partners continued to ramp up the investigation. The FBI brought in profilers, analysts, bomb experts, and crisis response teams from the Bureau’s Critical Incident Response Group to South Carolina to assist in the effort.

Two more devices were found in the subsequent days: one a hoax, and one an actual bomb that bomb techs disabled before it went off. Evidence clearly linked the bombs together.

A break in the case came when local police talked to a man who said he knew someone who had been practicing building bombs in his home. After additional investigation, the JTTF quickly closed in on the man, Wesley “Dallas” Ayers, 26, who lived very close to the site of the bombings.

After gathering enough evidence for a judge to approve a search warrant, investigators searched Ayers’ home that he shared with his girlfriend. The evidence was overwhelming, including identical bomb components to the ones used in the devices and exact copies of the writings that had been found at the scenes. Also among the evidence were two guns and a type of vest known to be used by suicide bombers.

“This was deliberately placed where a child or passerby could have found it. Fortunately, someone saw it and knew to call us.”

In total, there were six incidents between January 24 and February 24, 2018—three hoax devices and three bombs. The investigation was a race against time, as the FBI’s bomb experts could see the devices getting more sophisticated each time. Without the quick work to locate and arrest Ayers, the bombings could have been much worse.

“We knew based on all the evidence that he was not done deploying these devices,” Derrickson said. “If he had not been caught, there would have been more.”

In October 2018, Ayers pleaded guilty to weapons of mass destruction and firearm charges and was sentenced in February 2019 to 30 years in prison.

In addition to the collaborative investigation with local partners, the FBI credited the community—understandably on edge as the devices continued to be found—for their vigilance and cooperation. A local church offered its parking lot to serve as the location for the command post, and business owners shared their surveillance footage.

“The citizens of the county were very helpful. They were outstanding in sharing their time, allowing us to review their surveillance cameras, and answering our questions,” Evanina said. “They really did come to our aid and help us in this case.” 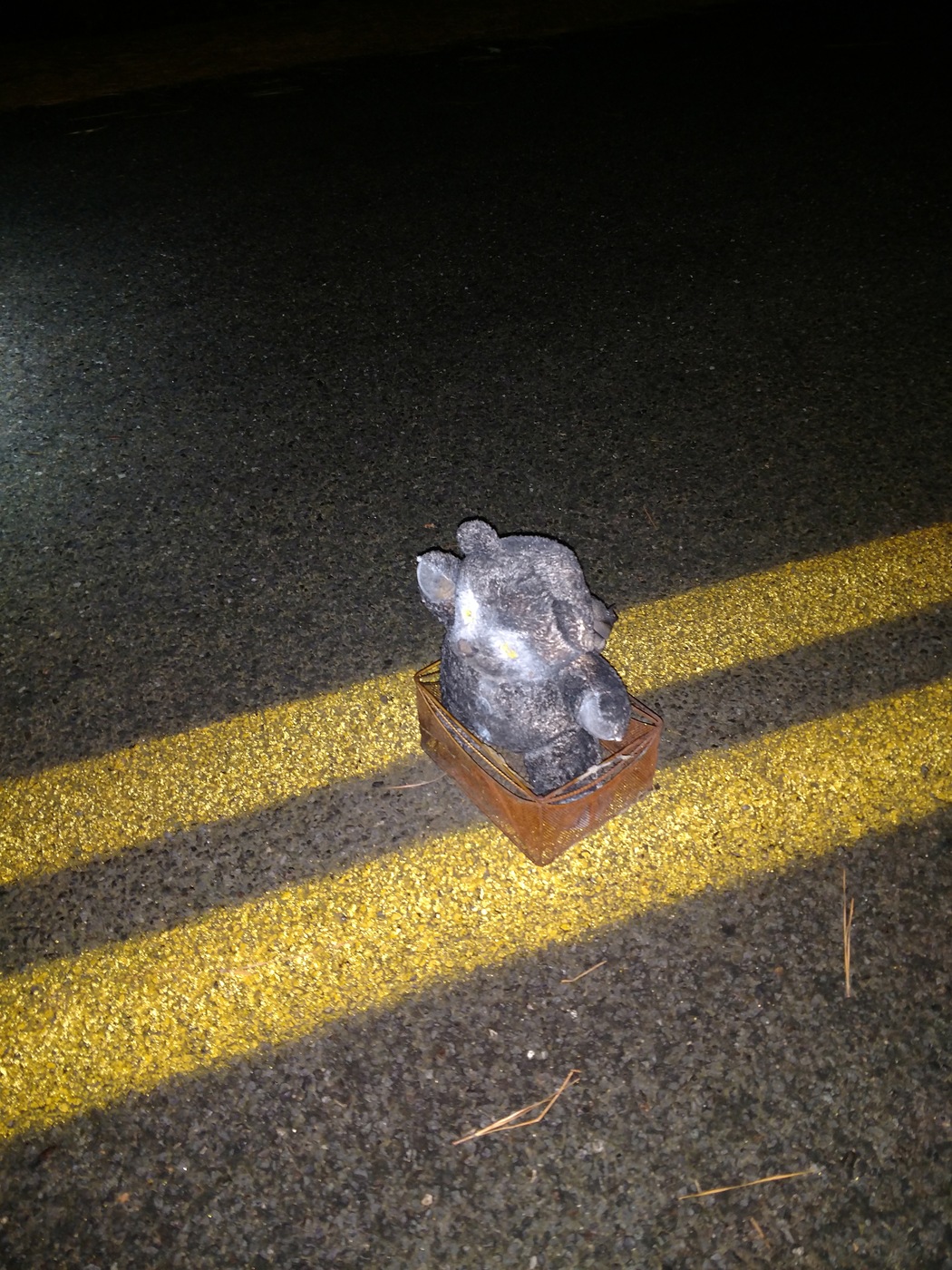 Wesley “Dallas” Ayers placed this bomb-containing teddy bear on a rural South Carolina road in February 2018; this was one of six real and hoax bombs he placed over the course of a month.