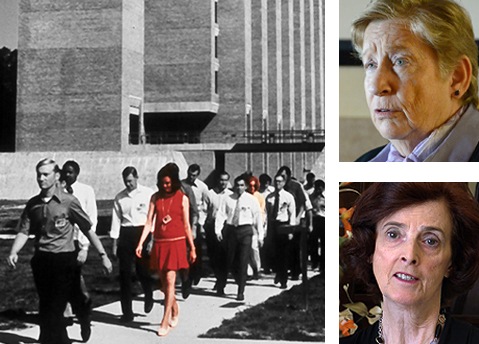 Joanne Pierce Misko, in red and lower right, and Susan Roley Malone, seen at the FBI Training Academy in 1972 and today, were the first women of the modern era to become special agents.

They were known as the nun and the Marine. The respective backgrounds of Joanne Pierce Misko and Susan Roley Malone could not have been more dissimilar. But 40 years ago, on July 17, 1972, the two women were drawn together by a shared goal—to become FBI special agents.

Up until then, under the leadership of longtime FBI Director J. Edgar Hoover, only men could be agents. But just weeks after Hoover died in May 1972, the Bureau’s acting director—motivated in part by new equal rights laws—changed the men-only policy that had been in place since the Prohibition Era. So on a balmy Monday exactly four decades ago, the two women assembled with 43 similarly pressed and starched men at FBI Headquarters to take their oath before heading down to the FBI Training Academy in Quantico, Virginia for 14 weeks (now 20) of physical and mental conditioning.

The new agent training was tough enough on its own—firearms, strength, endurance, self-defense, academics. But for Misko and Malone, who were expected to meet the requirements long in place for males, there was the added dimension of their novelty, which was not universally embraced at first.

Joanne Pierce Misko was a nun in New York for 10 years before joining the FBI in 1970 as a researcher. When the opportunity arose in 1972 to become one of the first women special agents, her boss at the time explained all the pluses and minuses. “Okay,” she said. “I still want to do it.”
- Read Her Story

Susan Roley Malone was in the Marine Corps when the FBI opened new-agent training to women. She always admired the Bureau. When women were allowed into the Academy, she said, “I was encouraged by my friends and my own desires, and I applied.”
- Read Her Story

“I’m sure when they first saw that there were two women in their class it was like, ‘Oh, we got them,’” Misko recalled in a recent interview. Malone, who had already broken some stereotypes as a Marine, remembers a fellow classmate confronting her during a break, brusquely asking why she thought she could be an FBI agent. “And I sat down and I talked to him,” Malone stated. “I said, ‘I love my country just like you do. I want to be here for the same reasons that you want to be here.’” He heard her out. And in the weeks that followed, the two women set out to demonstrate that they belonged in their coveted slots in New Agent Class 73-1. They won over some of the most ardent doubters by rising to every challenge and helping their classmates over some hurdles along the way. In the crucible of training, the group bonded quickly.

“We got along pretty well and everybody kind of pulled together as a class,” said Misko, who was 31 at the time. “Because in training I think we were all in the same boat. We were all trying to prove ourselves.”

Permitting women into the ranks of special agents was a big story at the time, but the Bureau tried to minimize distractions in order to maintain the integrity of training. “They wanted us to be like any other agent,” said Malone, who was 25 when she entered the FBI Academy. “They didn’t want to make this inordinately special or set us apart from our fellow agents. I think that was very important at the time. We wanted to be just another agent.”

Despite following wildly divergent paths to Quantico and having very little in common, Misko and Malone—the nun and the Marine—leaned on each other to get through training. “We supported each other,” said Malone. “We were complementary. We worked together. We would practice the run at night, we would go to the gym and work out. We were allies. There’s that bond there when you’re someone’s roommate and you’re going through the same training. That’s a lifelong bond.”

Misko and Malone completed the training in October 1972 and, like all new agents, received orders to report to one of the Bureau’s field offices. Malone was sent to Omaha and Misko to St. Louis. Both women recall being met with some initial resistance in the ranks, but quickly showed they could pull their weight. The former roommates would cross paths occasionally in their successful careers. They recognize today they were trailblazers, but that was never their goal.

“I honestly didn’t see myself as a pioneer,” said Misko, now 71. “It was just a role that I was fortunate enough to become a part of.”

It wasn’t long after his arrival in Indian Country that Special Agent John Fortunato started carrying dog biscuits in his FBI vehicle. Some of the wild dogs who roam the New Mexico reservations are a lot easier to befriend or distract when they are offered food.

Inside the Denver JTTF, Part 2

The more than 100 FBI-led Joint Terrorism Task Forces (JTTFs) around the country rely on a network of local, state, and federal partners to help protect the nation. In Denver, one of our key partners is the Colorado Information Analysis Center.