Part 7: Two Have Made the Ultimate Sacrifice 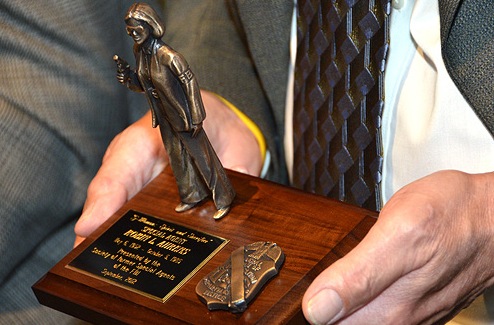 The families of fallen agents Robin Ahrens and Martha Dixon Martinez were given memorial plaques at a recent meeting of the Society of Former Special Agents of the FBI.

With eight kids under the roof, the Dixons’ one-bathroom house in Pittsburgh had no room for the mitts, hockey sticks, and other accouterments of active all-weather children. So everything was kept on the front porch. When things went missing, nobody was surprised when Martha, the sixth child and a future FBI special agent, initiated her own stake-out, sleeping on the porch and nabbing the culprit red-handed. It was the paperboy.

“That to me was probably the most revealing thing in her childhood of a law enforcement personality,” said Monica Dixon Dentino, Martha’s younger sister. “For her to say, ‘Yep, I’m going to sleep by myself on the front porch to confront somebody that’s invading our house’—she was tough like that.”

Many years later, in 1994, when a gunman began shooting in a squad room at the Metropolitan Police Department in Washington, D.C., Martha Dixon Martinez apparently chose to confront the attacker rather then retreat. She and fellow Special Agent Michael John Miller were killed in the exchange, along with a D.C. police officer. Right: (Robin Ahrens, left, was killed in 1985 during an operation to arrest an armed robber. Martha Dixon Martinez was killed in 1994 when a gunman opened fire on law enforcement officers in a police station in Washington, D.C.)

The event, recounted by Martha’s two sisters at a recent convention of former special agents recognizing the 40-year anniversary of women agents, marked the second time in the Bureau’s history that a woman agent was killed in the line of duty. Nine years earlier, in 1985, Special Agent Robin L. Ahrens was killed in Phoenix during an operation to arrest an armed robber. Both agents’ stories—the last part of our series marking four decades of women agents—punctuate how a desire to serve has led women from all backgrounds to become special agents since the position opened to women in 1972.

“You couldn’t tell her not to do that job because we worry about you,” said Christian Ahrens, one of Robin’s four brothers. “She would just go forage forward. That’s [the decision] she made—to be a special agent. I wish I could go back and say, ‘Be careful. Watch your back.’ But that’s not possible.”

Born in St. Paul, Minnesota, Robin was one of six kids who thrived outdoors, volunteering as a teenager on the National Ski Patrol. As a school teacher in Virginia, she led a field trip to the U.S. Marine base at Quantico—home to the FBI Training Academy—and decided what she wanted to do. She became an agent in June 1985; just four months later, she was killed.

“It was a tragic event,” said James Ahrens, Robin’s older brother. “But when she was joining the FBI, she was excited. She was so happy to be in. I keep looking at that part of it, too.”

While Robin’s path to the FBI seemed serendipitous, Martha Dixon’s journey appeared preordained. A chemistry major in college, she worked in the lab of a local hospital, determined to one day work at the FBI Laboratory. She became an agent in 1987 and quickly discovered in her first office in Knoxville that she preferred working on the front lines. “She liked solving the problems and closing a case,” her sister Monica said.

Martha transferred to the Washington Field Office, where she went to work on a cold case homicide squad. On November, 22, 1994, a gunman passed her by as he entered the squad room at police headquarters, possibly mistaking her for a secretary. Then came the shots.

“She heard the noise and chose not to leave,” said Jan Dixon Smith, Martha’s older sister. “She went in. She just knew that she might be able to do something. And that makes us very proud.”

With its aging, affluent population, South Florida is ground zero for the multi-billion-dollar criminal industry of health care fraud. Few cases illustrate the depth of the problem—and our efforts to fight it—more than Operation Universal Money Fast.