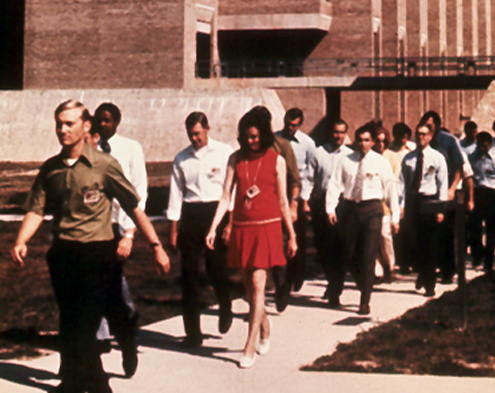 The FBI Academy in 1972, when the first women in the modern era were sworn in as special agents. Joanne Pierce (Misko) is shown in the red dress; Susan Roley (Malone) is partially visible near the back of the group.

The FBI had long held that women couldn’t handle the physical rigors of the special agent position, which includes making arrests, taking part in raids, and engaging in self-defense. In those days, the Bureau operated under certain exemptions to federal regulations concerning equal employment. But times were changing—women were taking on more and more demanding positions, physically and otherwise. 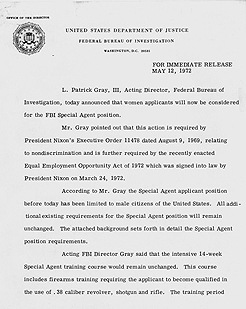 With Hoover’s death on May 2, there was an opportunity to put into place changes that had been brewing for some time. So with the stroke of a pen, L. Patrick Gray opened a new chapter in FBI history.

On July 17, 1972, Joanne Pierce (Misko) and Susan Roley (Malone) were sworn in as FBI special agents and began that arduous training outlined in Gray’s press release, graduating in October. By the end of that year, 11 women would be sworn in.

In 1978, Special Agent Christine Karpoch (Jung) would become the first female firearms instructor—and she would shoot the coveted “possible,” a perfect score on the FBI’s Practical Pistol Range.

In 1985, Robin Ahrens became, tragically, the first female agent killed in the line of duty.

In 1990, Special Agents Susan Sprengel and Helen Bachor were sent to London and Montevideo, Uruguay to serve as the FBI’s first female assistant legal attachés.

In 2001, Special Agent Kathleen McChesney became the first woman to attain the rank of executive assistant director, further chipping away at the glass ceiling. 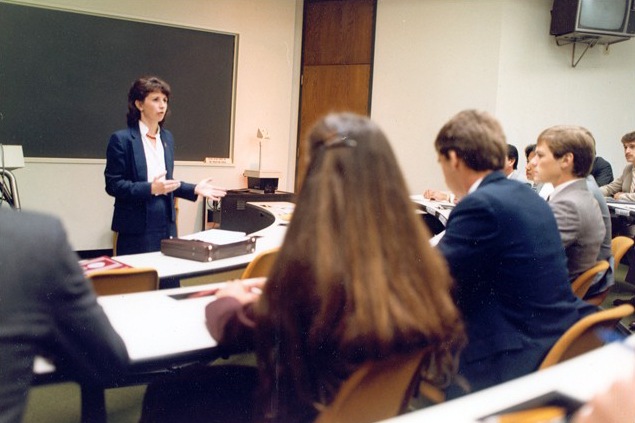 Kathleen McChesney became the first woman to attain the rank of executive assistant director after being named the head of Law Enforcement Services in December 2001. McChesney, shown here teaching a new agents class at the FBI Academy, became an agent in August 1978 and rose through the ranks as an investigator, supervisor, and manager in both the field and at Headquarters. She retired in November 2002. Today, the FBI employs more than 15,000 women, with over 2,600 serving as special agents. Visit FBIJobs.gov for the latest openings and more information on Bureau careers.

Today, we have 2,675 women special agents, serving on and leading counterterrorism squads, cyber squads, counterintelligence squads, and criminal squads. They head field offices, including the largest in the Bureau—New York. They work as firearm instructors and in all other specialty fields. They lead Headquarters divisions and overseas offices. They are superb agents who just happen to be women.

Wait a minute—weren’t there women agents in the 1920s?

Yes! When J. Edgar Hoover took over the Bureau in 1924, he inherited two female agents: Jessie B. Duckstein and Alaska P. Davidson, who both resigned within a few months as part of the Bureau’s reduction of force. But on November 6, 1924, Hoover himself changed the employment status of Lenore Houston from “special employee” in the New York office to “special agent.” She served in two other offices before resigning at the end of 1928. The next women agents weren’t hired until 1972.

Stay tuned for spotlights on our women special agents in the days and months ahead, commemorating 40 years of service and excellence.