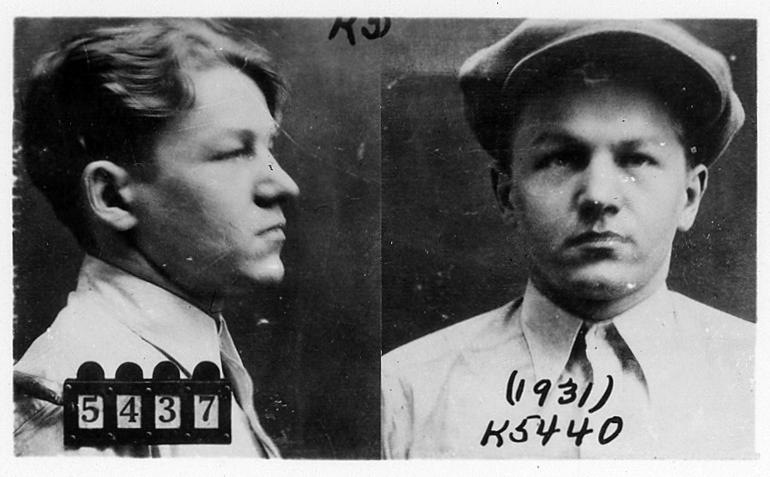 He was a protege of Alvin Karpis and a partner of John Dillinger. But Lester Gillis, better known by his alias George “Baby Face” Nelson, was far too ruthless and reckless for even those hardened gangsters.

Despite his boyish looks (thus the nickname), Nelson was a callous killer with a violent temper. Eventually even Dillinger refused to rob banks with him. Nelson ended up killing three FBI agents before losing his life during a bloody shoot-out.

“Baby Face” Nelson was born Lester M. Gillis on December 6, 1908, in Chicago, Illinois. He roamed the Chicago streets with a gang of juvenile hoodlums during his early teens. By the age of 14, he was an accomplished car thief and had been dubbed “Baby Face” by members of his gang due to his juvenile appearance. Nelson’s early criminal career included stealing tires, running stills, bootlegging, and armed robbery.

In 1922, Nelson was convicted of auto theft and was committed to a boys’ home. Two years later, he was released on parole, but within five months he was returned on a similar charge.

In 1928, Nelson met a salesgirl, Helen Wawzynak, whom he married. His wife retained the name Helen Gillis throughout their marriage.

Nelson was sentenced to a prison term of one year to life for his January, 1931, bank robbery in Chicago, Illinois. After a year’s confinement, Nelson was removed from the Illinois State Penitentiary, Joliet, Illinois, to stand trial on another bank robbery charge in Wheaton, Illinois. On February 17, 1932, Nelson escaped prison guards while being returned to Joliet. After a brief stay in Reno, Nevada, he fled to Sausalito, California. There he meet John Paul Chase, with whom he would be closely associated for the rest of his life. 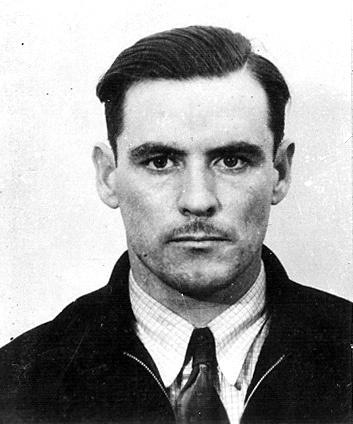 John Paul Chase (pictured left), born December 26, 1901, lived most of his life in California. He attended school through fifth grade, then worked at a ranch near San Rafael, California. Chase later worked in railway shops for four years, first as an office boy, then as a machinist’s apprentice. In 1930, Chase became associated with a liquor smuggling operation comprised of persons with underworld connections.

When Nelson arrived in California, Chase still was involved with the liquor smuggling gang. Nelson worked with Chase as an armed guard for the truck used to illegally transport liquor. The two men became close friends, and Chase frequently introduced Nelson as his half-brother.

Nelson was joined by his wife and remained in California until May, 1933. While Chase stayed in Sausalito, Nelson departed to Long Beach, Indiana, where he lived for several months. While in Indiana, Nelson met several criminals, including Homer Van Meter, and occasionally accompanied them to San Antonio, Texas. Nelson may have made his original connection with the Dillinger gang during this period.

In December, 1933, Nelson contacted Chase and they remained together for almost a year. During this time, a man was shot and killed in Minneapolis. The perpetrators were reportedly in an automobile bearing California license plates which were eventually traced to a car owned by Nelson.

After a short trip to Bremerton, Washington, Nelson and Chase proceeded to Reno, Nevada. Chase later reported in an interview that Nelson killed a man during an altercation while they were in Reno. The victim was a material witness in a United States mail fraud case.

Little Bohemia and Beyond

In April 1934, Nelson, Helen Gillis and John Paul Chase went to Chicago, Illinois, where they joined the Dillinger gang. While Chase remained in Chicago, Nelson and his wife vacationed with the Dillinger gang at the Little Bohemia Lodge in northern Wisconsin.

The FBI learned of the gang’s location on April 22, 1934, and special agents proceeded to the Little Bohemia Lodge. Barking dogs alerted the gangsters to the impending FBI raid. The gangsters escaped in the dark, leaving a few women associates, including Helen Gillis, behind.

Nelson fled to a nearby home and forced his way in with two hostages. Shortly thereafter, Special Agents J. C. Newman and W. Carter Baum arrived at the scene with a local constable. When their car stopped, the diminutive Nelson, who stood only five feet four inches high and weighed 133 pounds, rushed to the car and ordered the occupants to get out. Before they could comply, Nelson shot all three men, instantly killing Special Agent Baum with a series of shots from his automatic pistol.

Within a short time, Chase rejoined Nelson. Helen Gillis, who had been released on parole, met her husband and Chase about a month later. They lived near Lake Geneva, Wisconsin, for several days. On June 23, 1934, Attorney General Homer S. Cummings offered a reward for Nelson’s capture or information leading to his arrest.

A robbery of the Merchants National Bank, South Bend, Indiana, occurred on June 30, 1934, in which a police officer was shot and killed. “Baby Face” Nelson, John Dillinger, and Homer Van Meter participated in the actual robbery. Following the robbery, the gangsters fled to Chicago, Illinois. Later two police officers were shot on Wolf Road, outside Chicago, when Nelson opened fire as they approached the gang’s meeting place.

That summer, Nelson and Chase made numerous trips between Chicago and California. On one occasion, they were arrested for speeding in a small town. They paid the $5 fine at the police station and were released. Their car, containing machine guns, rifles and ammunition, was not searched.

In late August 1934, the group returned to Chicago. Within a month, Nelson went to Nevada and Chase traveled to New York City. Nelson and Chase again joined forces near Minden, Nevada, on October 10, 1934.

They proceeded to Chicago, where they stole a car on November 26, 1934, and drove to Wisconsin. 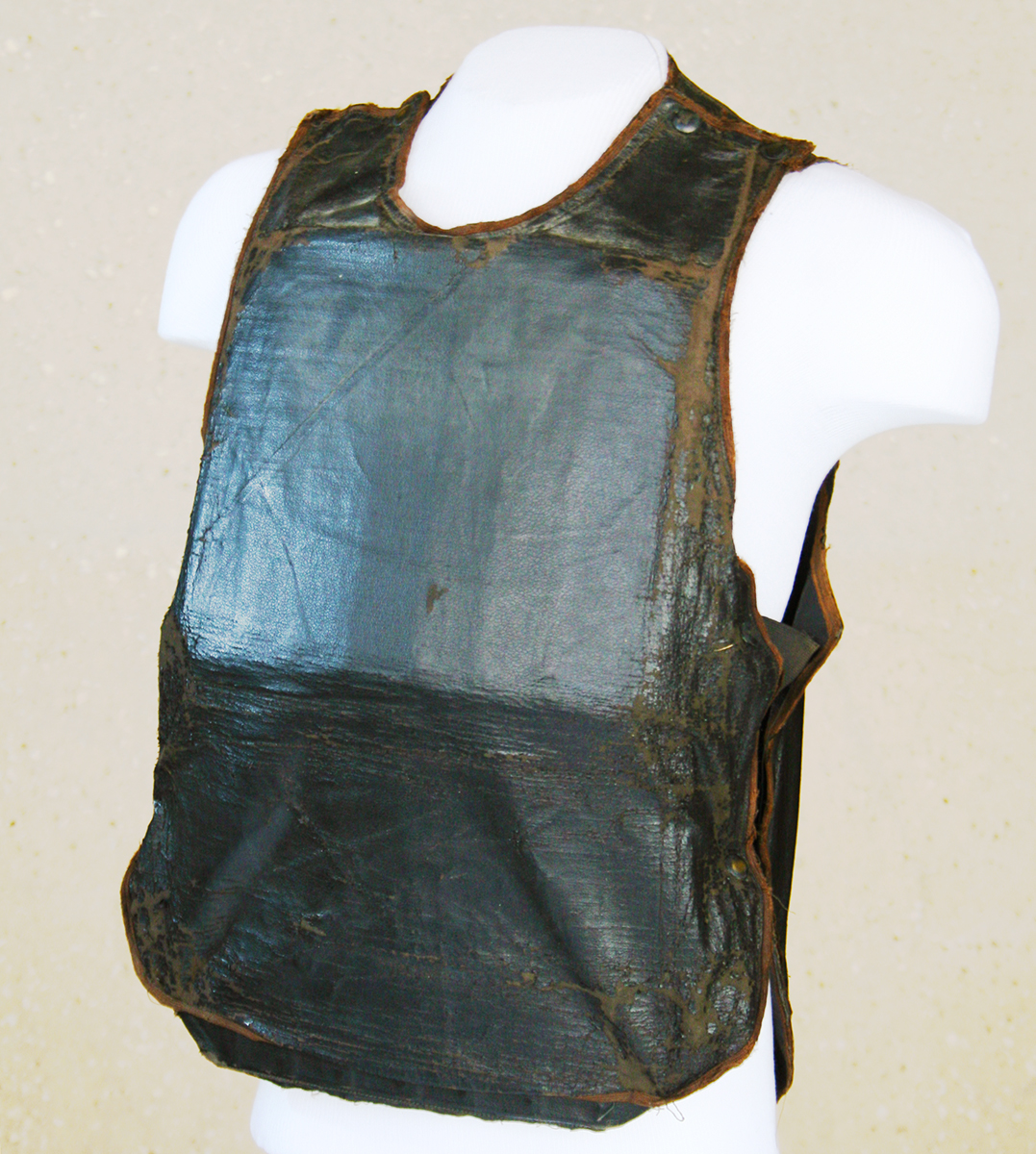 Baby Face Nelson’s body armor, which was recovered after the shootout in Barrington, Illinois. Click the picture for details.

Inspector Samuel P. Cowley of the FBI’s Chicago Office had been assigned to search for Nelson. On November 27, 1934, Cowley received word that Nelson had been seen driving a stolen car.

Two special agents spotted the vehicle near Barrington, Illinois. Nelson brought his car around behind the agents, and Chase fired five rounds from an automatic rifle into the agents’ car.

One of the agents returned fire and one shot pierced the radiator of Nelson’s car, partially disabling it.

Suddenly, Nelson veered off Northwest Highway at the entrance to the North Side Park in Barrington, Illinois, and stopped. Before Cowley and Hollis could get out of their car, Nelson and Chase began firing automatic weapons at them.

Special Agent Hollis was killed during the gun battle which lasted only four or five minutes.

Nelson, also critically injured, was helped into Cowley’s automobile by Chase. Many guns and other articles were transferred from Nelson’s car to the agents’ car.

Helen Gillis had been lying in a field during the battle. She jumped into the government vehicle as Chase was driving it away. 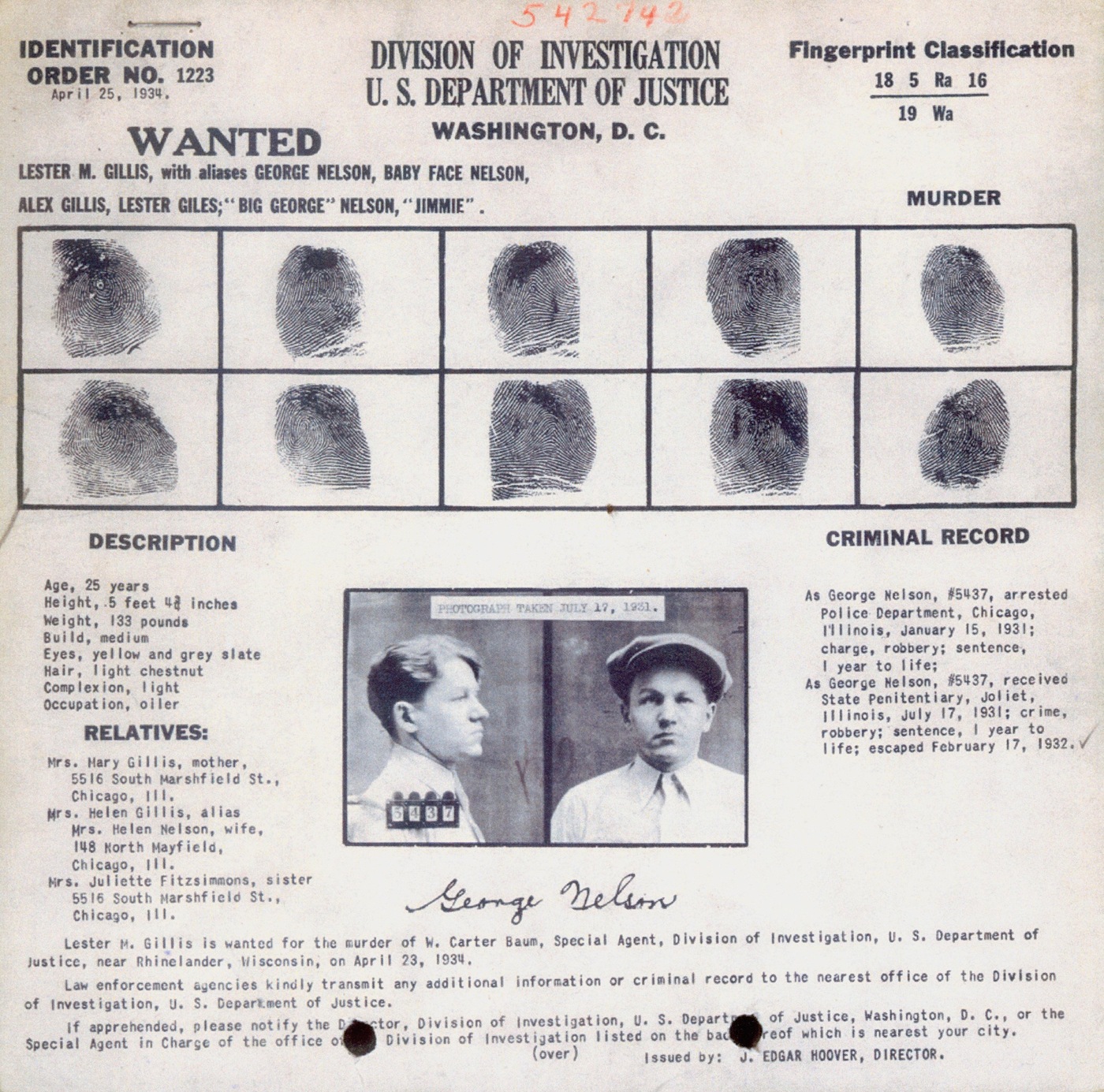 “Baby Face” Nelson died about 8:00 that evening. In response to an anonymous telephone call, FBI agents found his body the next day near a Niles Center, Illinois, cemetery.

Nelson’s widow was arrested on November 29, 1934. Having violated the terms of her parole, Helen Gillis was sentenced to serve one year and one day in the Women’s Federal Reformatory in Mila, Michigan.

After Chase disposed of Nelson’s body, he returned to Chicago. On November 30, 1934, Chase responded to a want ad for men to drive automobiles to Seattle, Washington. To obtain this job, he was photographed for a chauffeur’s license at a police station. Because Chase’s only known arrest had been for drunkenness in 1931, no wanted circulars with his photograph and fingerprints had ever been issued.

In early December 1934, special agents of the FBI’s San Francisco Office contacted Chase’s former employers and associates. They were instructed to notify the FBI if Chase was seen. On December 27, 1934, Chase tried to borrow money from employees at the Mount Shasta, California, fish hatcheries, where he had worked in 1928. The FBI and local police were immediately notified, and Chief of Police A. L. Roberts apprehended Chase.

On December 31, 1934, Chase was removed to Chicago, Illinois, where he was the first person to be tried under the law that made it a federal violation to murder a special agent of the FBI in the performance of his duties. Chase’s trial began on March 18, 1935. One week later, the jury found him guilty of murdering Inspector Samuel P. Cowley. The attorney general designated the United States Penitentiary, Alcatraz Island, California, to receive Chase, and his imprisonment there began on March 31, 1935.

Chase was transferred to the United States Penitentiary, Leavenworth, Kansas, in September, 1954. Although he had been serving time for the murder of Inspector Cowley, 20 years later Chase had not yet been tried on the December 31, 1934, indictment charging him with the murder of Special Agent Hollis. On April 27, 1955, a motion was filed in United States District Court, Chicago, Illinois, demanding immediate trial on this indictment or its dismissal.

On October 17, 1955, a United States District judge dismissed the indictment that charged Chase with Hollis’s murder. He held that Chase’s mere knowledge of the indictment and his failure to take action did not constitute a waiver of his right to a speedy trial.

When the pending indictment was dismissed, Chase became eligible for parole. After parole had been denied repeatedly, Chase finally was paroled from Leavenworth on October 31, 1966. After his release, Chase resided in California, where he was employed as a custodian for over six years.