Good evening. My name is Greg Bretzing, and I am the Special Agent in Charge of the FBI in Oregon.

We have quite a bit of information to share with you tonight concerning the occupation of the Malheur National Wildlife Refuge.

First, I would like to confirm that as of this morning one more person left the refuge through a checkpoint. We believe there are four others who currently remain on the refuge. Since the establishment of checkpoints, a total of nine people have left the refuge. Of those, the FBI released six and arrested three.

Secondly, I would like to confirm that the FBI and Oregon State Police have narrowed the containment zones. This was done to make it more convenient for those who live and work in the immediate area of the refuge to go about their business. To this end, Highway 205 is now open in both directions.

There has been some media reporting that the situation at the refuge is resolved. That is NOT true. Again, we still believe there are occupiers on the refuge. The negotiators continue to work around the clock to talk to those four people in an effort to get them to come out peacefully.

Thirdly, we know there is quite a bit of interest related to the events as they occurred on Highway 395 on Tuesday afternoon. We know there are various versions of what occurred during this event: most inaccurate, some inflammatory. To that end, we want to do what we can to lay out an honest and unfiltered view of what happened and how it happened.

FBI agents and Oregon State Police troopers were involved in this operation. During this operation, OSP troopers utilized deadly force due to their proximity to LaVoy Finicum as the situation unfolded. Because of this, the Deschutes County Major Incident Team is conducting the outside review of the shooting per Oregon State law and established protocols. Because of that ongoing investigation, I will not be able to answer every question you have, but hopefully we will give the public some clarity as to what occurred.

At approximately 4:25 pm on Tuesday, January 26, 2016, FBI and OSP began a law enforcement action to bring into custody the people riding in two separate vehicles as they traveled between Burns and John Day. The FBI did have a plane in the air, and what I am about to show you is a video from that plane. A couple of notes about the video before we watch it.

The video picks up a few seconds before the FBI and OSP vehicles pull in behind the Jeep, the second vehicle in line. The jeep quickly pulls to a stop while the white truck, driven by LaVoy Finicum, continues some distance up the road. Some law enforcement vehicles stay with the Jeep while others continue following the white truck. Over a period of several minutes out of camera view, the following people exit the jeep without incident:

Looking at the white truck, about four minutes into the video, Ryan Payne exits through a back door. It’s difficult to see behind the trees, but in the lower right hand corner you can see him with his hands up being approached by the law enforcement officers and being taken into custody.

There is a period of approximately three minutes and 47 seconds where the truck sits on the road. We have edited it for time here, but it is available in the raw, unedited version on the FBI’s YouTube channel. Throughout this time, agents and troopers are providing verbal commands to the occupants to surrender. We can’t comment on what may have been going on in the truck at this time, but those details may come out later as part of the overall shooting investigation.

When we come back to the video, the white truck leaves the scene at a high rate of speed. It travels some distance, quickly approaching a vehicle roadblock in the roadway.

As the white truck approaches the roadblock, there is a spike strip across the road but it appears Finicum missed it as he attempted to drive around the roadblock. He nearly hits an FBI agent as he maneuvers to the left. The truck gets stuck in the snowbank.

Finicum leaves the truck and steps through the snow. Agents and troopers on scene had information that Finicum and others would be armed. On at least two occasions, Finicum reaches his right hand toward a pocket on the left inside portion of his jacket. He did have a loaded 9 mm semi-automatic handgun in that pocket.

Approximately 30 seconds after the shooting, law enforcement officers at the scene deployed flash bangs to disorient any other armed occupants. Shortly after that, they deployed less-lethal sponge projectiles with OC capsules. Those OC capsules would be similar to pepper spray.

Over a period of several minutes agents and troopers worked to safely remove the remaining truck occupants, and to take them into custody. Those people included:

As soon as the agents and troopers were confident that they had addressed any further threats, they provided medical assistance to Finicum. That happened about 10 minutes after the shooting.

Agents and troopers did find three other loaded weapons inside the truck. They included two loaded .223 caliber semi-automatic rifles. There was also one loaded .38 special revolver.

Again, you can see the rest of this unedited video on the FBI’s YouTube channel.

Finally, again, I want to acknowledge the stress and disruption that the occupation of the refuge has caused has to the people of Harney County. We know this is difficult. We know that you want this concluded as soon as possible. We are doing everything we can to bring this to a resolution safely and quickly.

I have time for a few questions.

Note regarding date/time stamp in the left corner of video: Pilots use Zulu Time, also known as Greenwich Mean Time (GMT), when they fly. Zulu time is eight hours ahead of Pacific Standard Time (PST). Therefore, although this footage was taken on January 26, 2016 in Oregon, the date/time stamp on the video shows just after midnight January 27, 2016.

This is the complete video footage of a joint FBI and Oregon State Police traffic stop and OSP officer-involved shooting of Robert "LaVoy" Finicum along Oregon Highway 395 near milepost 50 in Harney County. This footage, which has only been edited to blur out aircraft information, was taken by the FBI on 01/26/2016 and released by the FBI on 01/28/2016.
Download

This is a shortened and edited version of FBI footage showing the joint FBI and Oregon State Police traffic stop and OSP officer-involved shooting of Robert “LaVoy” Finicum along Oregon Highway 395 near milepost 50 in Harney County. This condensed clip was shown at an FBI press conference in Burns, Oregon on 01/28/2016.
Download 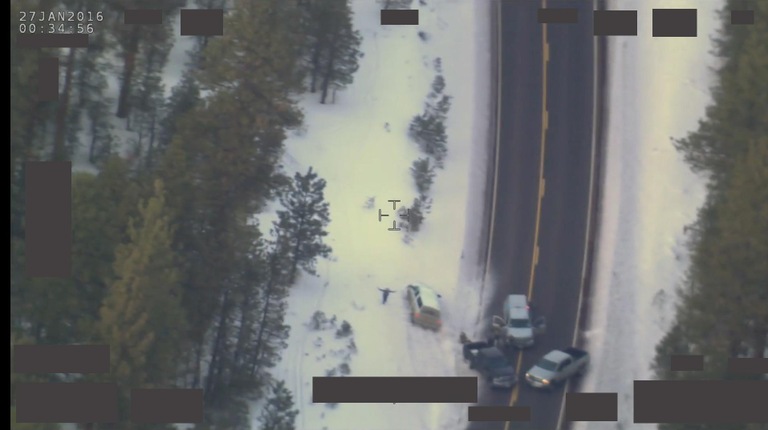 Above are still images taken from footage of a joint FBI and Oregon State Police traffic stop and OSP officer-involved shooting of Robert “LaVoy” Finicum along Oregon Highway 395 near milepost 50 in Harney County on January 26, 2016. Select image to download.