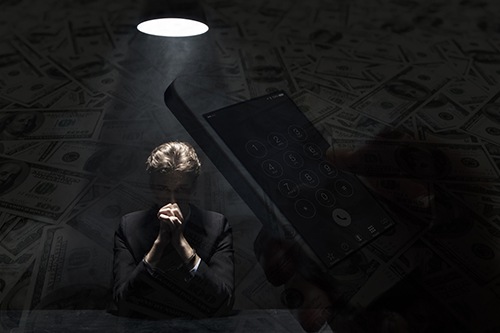 Jose Ramirez, a retired New York police officer and ultra-fit triathlete, is an unlikely victim. But last December in Cancun, Mexico, after completing an Ironman competition, he was tricked into believing his life was in danger. Like an increasing number of U.S. citizens on both sides of the border, Ramirez was the target of an extortion scheme known as virtual kidnapping.

Unlike traditional abductions, virtual kidnappers do not intend to physically detain their victims. Instead, through various deceptions and threats of violence, they coerce individuals to isolate themselves from their families—or make families believe that their loved ones are being held—all to extract a quick ransom before the scheme falls apart.

“Victims of virtual kidnappings are scared for their lives, and so are their families,” said Special Agent Brian Wittenberg, a member of our International Violent Crimes Unit at FBI Headquarters who has worked many of these cases.

Although these extortion schemes have been around for many years, their numbers are on the rise, and the criminals’ tactics are becoming more sophisticated. “It’s big business for them, and they do it well,” Wittenberg said. “Since the threat is continuing to evolve, the FBI wants to raise public awareness to help individuals from becoming victims.” (See sidebar.)

After completing the rigorous Ironman—a 2.4-mile swim, 112-mile bike ride, and marathon run—the 73-year-old Ramirez returned to his hotel room in the evening, called his wife at home in Nevada, and went to sleep. Around 1 a.m., the phone rang in his room. A man claiming to be a member of the Zetas, a ruthless drug cartel, said Ramirez was being “fined” $10,000.

They knew his name and information about him, possibly from accomplices at the hotel. “They were very believable, and they were making threats,” Ramirez said, recalling the threats: “If you don’t listen to us, we are going to put drugs in your hotel room and you’re going to rot in jail in Mexico. Or we will just put a pistol to your head and kill you.”

What followed for Ramirez was a nearly three-day ordeal in which he was instructed to change hotels, buy a new cell phone—so his wife could not reach him—and withdraw money from the bank. “And don’t forget, we are watching you,” he was told. Eventually, his wife contacted local law enforcement who, in turn, called the FBI. With the help of Mexican police, Ramirez was recovered unharmed.

Although millions of Americans safely visit Mexico each year for business and pleasure, they can be targets for virtual kidnappers. “People with family and connections in Mexico and communities on both sides of the border have legitimate fears of the gangs and drug cartels and how violent they are,” said a member of our Crisis Negotiation Unit who has worked many hostage situations. “That fear plays into the hands of the virtual kidnappers,” he said. “They use it to their advantage.”

“If you think you are a victim, get to a place that feels safe, and then call someone who can help,” said the crisis negotiator. “If you are a family member or loved one getting ransom calls, remember that you have more power than you think, because you have the money that the kidnappers want.” He added that while some families think they can handle these situations alone, the FBI—which is the lead investigative agency when a U.S. citizen is taken hostage overseas—stands ready to offer its expertise and guidance to frightened families. “We can help,” he said.

In one example of virtual kidnapping, criminals targeted the parents of a young woman traveling in Mexico—whose phone and contact information they had stolen—and told the family they would cut off her fingers unless money was wired to them immediately. A female accomplice screamed in the background for effect. (The woman whose phone was taken was never in danger, and didn’t know of the scheme until she contacted her family later.)

For criminals, the success of any type of virtual kidnapping depends on speed and fear. They know they only have a short time to exact a ransom payment before the victims and their families unravel the scam or authorities become involved.

To avoid becoming a victim, look for these possible indicators:

If you receive a phone call from someone demanding a ransom for an alleged kidnap victim, the following course of action should be considered:

If you believe you are a victim—like Jose Ramirez—FBI crisis negotiators suggest that you try to make contact with family members as quickly as possible, and get yourself to a place that feels safe.

If you have any question about whether a ransom demand is a scheme or a legitimate kidnapping, contact your nearest FBI office immediately. Tips can also be submitted online at tips.fbi.gov. All tipsters may remain anonymous.

The Evolution of Virtual Kidnapping

Years ago, criminals carrying out virtual kidnappings used simple tactics. They might wait at a Mexican bus station and spot an American’s luggage nametag that included a home address and phone number. If the tourist got on a nonstop bus for a five-hour trip during which there was no cell phone service, the criminals knew they had that window of time to execute the scheme by contacting family members in the U.S., convincing them their loved ones were in danger, and demanding a ransom be paid by wire transfer.

Today, the schemes can involve accomplices in tourist hotels, telemarketing-style cold calls, money handlers, and phone techniques such as three-way calling that lead families and law enforcement to believe that victims have been physically detained.

Recently, virtual kidnappers cold-called hundreds of numbers in Texas—likely using directories and other phone lists—to target American physicians, banking that at least some of those contacted with family or connections in Mexico would fall for the scam.

“The FBI responds to all reports of U.S. citizens being taken hostage, whether virtual or traditional,” said Special Agent Brian Wittenberg. “The virtual kidnappers are savvy and prepared, and one of our goals is to make sure the public is prepared as well.” He added, “The criminals’ tactics are constantly evolving, but the hallmark of any virtual kidnapping is always the same—preying on people’s worst fears.”

Ten years ago, the FBI stood up a task force to investigate commercial websites involved in the worldwide distribution of child pornography.