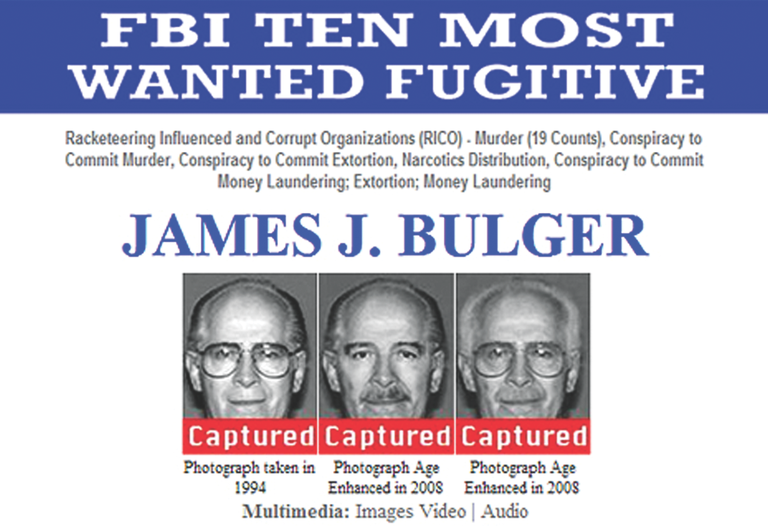 The FBI-led Bulger Fugitive Task Force had been seeking the Boston fugitive for 16 years.

Top Ten fugitive James “Whitey” Bulger was arrested thanks to a tip from the public—just days after a new media campaign was announced to help locate the gangster who had been on the run for 16 years.

Bulger, who once ran South Boston’s violent Winter Hill Gang and was wanted for his role in 19 murders, was arrested with his longtime companion Catherine Greig Wednesday night (June 22) in Santa Monica, California, by agents on our Violent Crimes Task Force.

“Although there are those who doubted our resolve, it never wavered,” said Boston Special Agent in ChargeRichard DesLauriers. “We followed every lead, we explored every possibility, and when those leads ran out we did not sit back and wait for the phone to ring. The result is we have captured one of the FBI’s Ten Most Wanted Fugitives, a man notorious in Boston and around the world for the very serious crimes he is alleged to have committed.”

The FBI has always relied on cooperation from the public to help capture fugitives and solve crimes. The new media campaign regarding Bulger was designed to draw attention to Greig, who fled with Bulger in 1995. A 30-second public service announcement (PSA) produced by the Bureau began airing Tuesday in 10 states where it was believed Bulger had resided or still had contacts. California was one of those states.

The PSA focused on the 60-year-old Greig’s physical appearance, habits, and personality traits and was directed specifically at women who might come in contact with her at places such as the beauty parlor or doctor’s office. After the PSA began to air, hundreds of tips flowed into the FBI, and one of them led to the arrest Wednesday night in a residence near Los Angeles.

“We were trying to reach a different audience to produce new leads in the case,” said Richard Teahan, a special agent in our Boston office who leads a task force that has searched for Bulger around the world. “We believed that locating Greig would lead us to Bulger. And that’s exactly what happened.”

The PSA included pictures of Greig after her pre-fugitive plastic surgeries and other details including her love of animals and the reward of up to $100,000 for her capture. Although she was not implicated in Bulger’s crimes, Greig was federally charged in 1997 for harboring a fugitive. The reward for Bulger is up to $2 million—the largest the FBI has ever offered for a Top Ten domestic fugitive.

Bulger, 81, who is known for his violent temper, was arrested without incident and was scheduled to appear in a Los Angeles court later today.

I would like to thank the U.S. Marshals Service, Massachusetts State Police, United States Attorney’s office, Massachusetts Department of Corrections, Boston Police Department, Drug Enforcement Agency and the Internal Revenue Service for their tireless efforts in support of the FBI’s fugitive investigation regarding James Bulger and Catherine Greig.

The FBI also wants to thank each person who had the courage to call the FBI to assist in the 16- year search for Mr. Bulger. The FBI has long known that combining the reach and power of the media with alert citizens is a successful formula for catching fugitives.

Let me provide you with a cursory summary of the circumstances surrounding Mr. Bulger’s and Ms. Greig’s arrest.

On Tuesday, June, 21, 2011, just after 8 p.m., PST, a tip was received by the FBI’s Los Angeles office. The tip was generated as a result of the FBI’s unique publicity campaign organized by Boston’s FBI office that began on Monday.  As part of that campaign, the FBI paid for a Public Service Announcement to run in 14 media markets across the country including San Francisco and San Diego. Those places were chosen because the FBI knew that Bulger and Greig had ties to those areas.

Although Los Angeles was not one of the markets in which the PSA ran, news coverage of the campaign aired in Los Angeles, on national news and cable outlets, and the publicity saturated the Internet.

Los Angeles FBI agents immediately relayed the tip to the FBI’s command post in Boston.  The command post had been set up to  quickly and methodically analyze tips, and direct leads to FBI personnel around the country and world that were expected to be generated by the PSA.

FBI agents, analysts and other staff in Boston reviewed the tip. They recognized that certain information appeared to be credible and promising.  By Wednesday at 10:50 a.m., PST, at the direction of FBI Boston, members of FBI Los Angeles’ fugitive task force were requested to conduct surveillance at the pertinent location. That task force included FBI agents and members of the Los Angeles Police Department.

Just after 4 p.m., PST, the task force members began conducting surveillance at the location.   The task force concluded that the tip was fruitful after observing two individuals who appeared to resemble the fugitives.

At approximately 5:45 p.m., PST, using a ruse due to safety concerns, agents and other task force members lured Mr. Bulger out of his apartment. Agents determined that the individual was, in fact, Mr. Bulger. He was placed under arrest without incident.

Agents then went back to the apartment and arrested Ms. Greig without incident. After the arrests, Bulger consented to a search of the residence.

The FBI’s Evidence Response Team then conducted a search of the residence and found the following, among other items, in excess of $800,000 in cash, more than 30 firearms and false identification.

The Search For Bulger Over the Years

Although there are those who doubted our resolve, it never wavered. We followed every lead, we explored every possibility and when those ran out we did not sit back and wait for the phone to ring.

The result is we have captured one of the FBI’s Ten Most Wanted Fugitives, a man notorious in Boston—and around the world—for the crimes he is alleged to have committed.

Over the last 16 years, the leaders of the FBI have stood on this podium and promised to spare no effort to return James Bulger to Boston. I am proud to say the FBI has fulfilled that promise.

Unlike New York, the Chicago mob consists of only one family, often referred to as the "Outfit."