Inside the Aubrey Lee Price Case 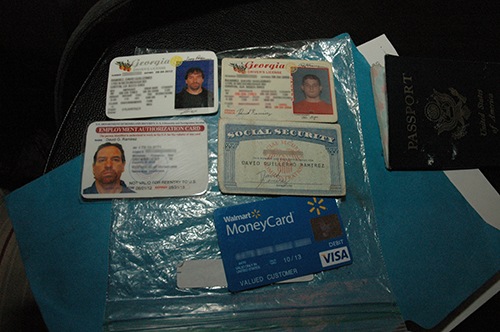 When he was arrested on New Year’s Eve day in 2013, Aubrey Lee Price had been on the run for nearly 18 months. To manage his life as a fugitive, Price created fake ID cards for himself like the ones shown here.

When a federal judge recently sentenced Aubrey Lee Price to 30 years in prison for bank fraud, embezzlement, and other crimes, it closed a chapter on the once successful businessman’s sensational criminal saga.

Price went from a devout Christian minister and trusted financial adviser to a schemer who wiped out many of his clients’ life savings and then faked his own death to avoid taking responsibility for what he had done. When a routine traffic stop in Georgia resulted in his arrest on New Year’s Eve in 2013—nearly 18 months after his disappearance—Price acknowledged that he had become a drug dealer.

His well-publicized rise and fall makes for a fascinating tale, but our agents who investigated the case and who specialize in white-collar crime are quick to point out that the real focus of this story should not be on Price but rather on his victims.

“It’s unbelievably sad,” said Special Agent Ed Sutcliff in our Atlanta Field Office. “Most of Price’s victims had worked 30 or 40 years to save for retirement. They were living off those funds,” said Sutcliff, who interviewed many of the victims while investigating the case. “They had to learn from us that Price—their friend and adviser—was missing, and all their money was gone.”

Price told investigators he got involved in the investment business to help fund his mission efforts overseas. He worked for two well-known investment firms and later started his own company, PFG. Many of his clients were personal friends from Georgia, where Price lived. Some knew him from church—he gave seminars on how to be a wise Christian investor. Others had been on mission trips with him. Eventually, he consolidated PFG to about 100 “significant investors,” Sutcliff said.

In 2009, unbeknownst to his clients, Price began gambling with their money, making risky investments. He would later falsify documents to hide those transactions. The following year, he convinced 40 of his clients to invest in a troubled Georgia bank—near where he had grown up—and profit by turning the bank around.

Price raised $10 million from his PFG clients, and bank employees and area residents put in $4 million. Price—who by this point was on the bank’s board of directors—was seen as a hero for helping to keep the community bank afloat.

But in 2011, Sutcliff said, Price realized the bank could not be turned around and that his investors stood to lose “a lot of money.” He convinced bank officials to use some of the institution’s funds to invest in U.S. securities and was given permission to wire out $5 million to an account he said he created with a well-known global investment firm.

“Everyone believed Price was on the up and up,” Sutcliff said. “He had investors, a solid track record, and there was no reason to doubt his ability or his honesty. And keep in mind that his PFG investors were getting bogus statements saying they were making money—and when they needed funds, he would provide them. It was the classic Ponzi scheme.”

There never was an account with the global investment firm, and that initial $5 million was just the beginning of Price’s thefts from the bank. He eventually gained access to more than $21 million and lost more than $16 million through risky investments—all the while telling the bank the money was being used to purchase securities. In the end, Price’s deception resulted in the bank’s failure and losses of more than $70 million.

In 2012, when he knew his house of financial cards was about to crumble, Price faked his suicide on a boat in Key West, Florida (see sidebar) and fled first to Mexico and later to Florida, where he grew and sold marijuana and other drugs, and sometimes served as a bodyguard for prostitutes.

“He went from clean-cut preacher and investment adviser to weed grower and prostitute escort,” said Sutcliff, who spent many hours interviewing Price. “He will tell you he made all those risky investments trying to earn back his clients’ money,” Sutcliff said. “He will tell you he still considers himself a religious person who prays for his victims—by name—every day.”

“Like any good con man,” Sutcliff added, “you want to believe what he is saying is true. But in the end, the words don’t match the actions. And then you think about the victims, who were left with nothing.”

A Fake Death, a Real Arrest

In June 2012, with his Ponzi scheme about to be revealed, Aubrey Lee Price sent his clients and family “suicide letters” in which he admitted he had defrauded a bank and individual investors and said that he planned to kill himself by throwing himself off a high-speed ferry boat after it left Key West, Florida.

The Coast Guard searched for Price’s body but found nothing. His wife and children, though, believed that he was dead—and at his family’s request, a judge later declared him dead—but FBI agents weren’t buying it.

“Although his suicide letters seemed sincere,” said Special Agent Ed Sutcliff, “we didn’t believe he was dead for the simple reason that there was no body.”

After more than a year of searching for Price, the 48-year-old was arrested on December 31, 2013, after he presented a false ID during a routine traffic stop in Brunswick, Georgia. It was later discovered that he had equipment in his home to make fake identification and was also in possession of handguns and multiple cell phones—all used to facilitate dealing marijuana and cocaine. “It was classic drug stuff,” Sutcliff said. “He was living that life.”

The Bureau played a small but important role during the early years of World War I.