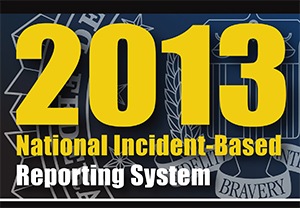 The NIBRS, implemented to improve the overall quality of crime data collected by law enforcement, captures details on each single crime incident—as well as on separate offenses within the same incident—including information on victims, known offenders, relationships between victims and offenders, arrestees, and property involved in the crimes. In this latest report, 6,328 NIBRS agencies—about a third of the more than 18,000 law enforcement agencies that participate in the UCR Program—reported 4,927,535 crime incidents involving 5,665,902 offenses, 5,980,569 victims, 4,517,902 known offenders, and 1,533,671 arrestees.

While these numbers are not yet nationally representative, the FBI is undertaking a number of efforts to educate law enforcement and others on the benefits of the NIBRS and to increase participation in the program. For example, we have partnered with the Department of Justice’s Bureau of Justice Statistics on the National Crime Statistics Exchange to assist states and agencies interested in submitting their crime data through the NIBRS.

As compared to UCR’s traditional Summary Reporting System currently used in the annual Crime in the United States report—which is an aggregate monthly tally of crimes—the NIBRS is a more comprehensive accounting of crime occurring in a law enforcement agency’s jurisdiction. When used to its full potential, the NIBRS can identify with precision when and where crime takes place, the form it takes, and the characteristics of its victims and perpetrators. Armed with this information, law enforcement agencies can better define and articulate the resources they need and then apply these resources where they’d be most effective.

When the UCR Program studied several years of NIBRS data to examine the effect of agencies switching to the system, most figures stayed the same—especially for the single-offense incidents—but slight increases occurred for agencies that had several multiple-offense incidents. For NIBRS submissions, all of the offenses in an incident were reported—not just the most serious one as is done in the Summary Reporting System. So when agencies switch to the NIBRS, it may seem like crime within their region has increased, but that perception of an increase is due to the greater level of reporting specificity in NIBRS data compared to that for summary data.

New in the NIBRS this year: This latest report includes information about new collection standards—and new data—including a revised rape definition, the addition of human trafficking offenses and gender and gender identity bias categories, and the revision of sexual orientation bias types and race and ethnicity categories.

Next year—at the request of the National Sheriffs’ Association and the Animal Welfare Institute—an animal cruelty offense category will be added to the NIBRS and will include four separate types of abuse: simple/gross neglect, intentional abuse and torture, organized abuse (dog fighting and cock fighting), and animal sexual abuse. This new category will be implemented during 2015, and data collection will begin January 2016.

The case of a minister-turned drug dealer who faked suicide after his Ponzi scheme failed.