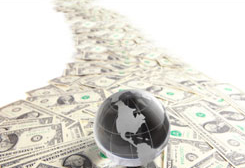 The U.S.-born radical cleric Anwar al-Awlaki once wrote an essay called “44 Ways to Support Jihad.” Five of his top 10 strategies focused on the same topic—money.

It’s not surprising. Money fuels the operations of terrorists. It’s needed to communicate, buy supplies, fund planning, and carry out acts of destruction.

But there’s a flip side to this proverbial coin. In the shadowy, secretive world of terrorists, this spending leaves a trail—a trail that we can follow to help expose extremists and their network of supporters…sometimes before they can strike.

That’s why shortly after 9/11, we established the Terrorist Financing Operations Section (TFOS). Within the FBI, TFOS is responsible for following the money, providing financial expertise on our terrorism investigations, and centralizing efforts to identity extremists and shut down terrorism financing in specific cases. More recently, TFOS has adopted a broader strategy to identity, disrupt, and dismantle all terrorist-related financial and fundraising activities. A key element is using financial intelligence to help identify previously unknown terrorist cells, recognize potential terrorist activity/planning, and develop a comprehensive threat picture.

It’s challenging work. The dollar amounts can be small—for example, the Oklahoma City bombing cost a little over $4,000 to carry out, the attack on the USS Cole about $10,000, and the London subway bombings around $14,000. At the same time, terror groups can obtain funding from seemingly legitimate sources— like donations, community solicitations, and other fundraising activities. They can also generate money from criminal activities such as kidnappings, extortion, smuggling, and fraud. And their financial networks—their methods and means of moving money—use both formal systems (i.e., banks, licensed money remitters, and the Internet) and informal systems (i.e., unlicensed money remitters and money couriers).

In addition to working with FBI field offices, the men and women of TFOS—experienced agents, intelligence analysts, forensic accountants, and other professionals—handle critical outreach duties. They coordinate efforts with the U.S. intelligence community and—through FBI legal attachés—our global intelligence and law enforcement partners. They work jointly with domestic law enforcement and regulatory communities. And, in conjunction with the Treasury Department’s Financial Crimes Enforcement Network (FINCEN), they conduct liaison with the financial services sector.

TFOS chief Jane Rhodes-Wolfe believes that the combined efforts of the financial industry, international partners, and federal, state, and local agencies have “established an increasingly difficult environment for terrorist financiers to operate in undetected…and ensure an ongoing and coordinated approach to terrorist financing to help prevent future terrorist attacks against the U.S.”

IAFIS returned several possible matches from a latent print found at the crime scene of an unsolved 1999 murder, and subsequent investigation led to the arrest and guilty plea of the man responsible.

An FBI bomb technician embedded with the Navy and applied his specialized skills there to find signatures and forensic material on bomb fragments and unexploded devices that helped the military piece together a clearer picture of its adversaries.