An Equitable Partnership Between the FBI and Navy 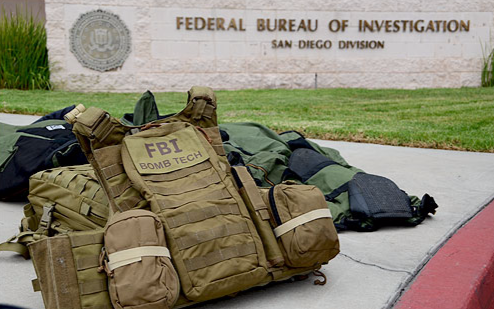 Special Agent James Verdi has traveled to Afghanistan, Iraq, and the Horn of Africa to study battlefield explosives. The FBI bomb technician embedded with the military and applied his specialized skills there to find signatures and forensic material on bomb fragments and unexploded devices that helped the military piece together a clearer picture of its adversaries.

As a certified bomb technician in the Bureau’s San Diego Field Office, Verdi is a long way from the battlefield today. But he still rolls out regularly with a Navy explosive ordnance disposal (EOD) unit—this one based on Coronado Island just outside San Diego. During training missions, Navy ships and planes drop live ammo on San Clemente Island 70 miles off the coast. Clearing the remnants is the job of the EOD technicians. Verdi often joins them so he can see firsthand how current military technicians operate in the field and what they are likely to encounter on the ground.

“They invite us along on a lot of their training exercises to do range clearance operations,” said Verdi. “That teaches us the military ordnance side of the house: what bombs, artillery rounds, and munitions look like so we can deal with them better if we see them.”

The working relationship in San Diego started about a decade ago, when the wars in Iraq and Afghanistan were ramping up and the military and FBI saw mutual benefits to sharing their unique skills and knowledge. For the FBI, which has played a growing investigative role in the war theaters by analyzing improvised explosive devices (IEDs) to help pinpoint their sources, the relationship is key because the military most frequently encounters IEDs. For EOD technicians, training with the FBI has opened a window on how explosives can be exploited for evidence, like at a crime scene.

“Our jobs are very similar, although we have more experience with military ordnance and they have much more expertise in the counterterrorism portions of the job—like explosives chemical analysis, explosives precursor knowledge, and so forth,” said Lt. Abe Kim of the Navy’s EOD detachment on Coronado Island. “We each bring different things to the table.”

Training together is a rule in the tight community of 468 bomb squads and more than 3,200 non-military bomb technicians across the country. To ensure consistency, every bomb technician is certified—and recertified every three years—through the Hazardous Devices School at Redstone Arsenal in Alabama, run by the FBI and the Army. Training with EOD techs, says Special Agent Steve Diaczyszyn—who supervises all of the Bureau’s special agent bomb technicians—is a key facet of the job.

“You never know when the public safety bomb techs and the EOD technicians are going to have to work together in the interest of public safety,” Diaczyszyn said. He added that every field office bomb technician knows their EOD counterpart because the military takes the lead when a case involves ordnance without a terrorism nexus.

Verdi and his team respond to more than 200 calls a year for incidents or suspicious packages. Every experience is unique, he says, so it’s important to share what you learn. Your life—and the lives of your partners—depends on it.

“That’s one of the most important things we get out of working and training together with the Navy,” said Verdi. “You have to earn their trust. And they have to know exactly how you’re going to perform downrange in stressful environments, especially when you’re in the combat theater. We train regularly so they know exactly how we are going to react. And they can depend on us when they need to.”

On February 26, 2013, two decades to the day after a truck freighted with explosives detonated under the North Tower of the World Trade Center in New York, the White House released a policy statement outlining the government’s commitment to countering improvised explosive devices, or IEDs, which accounted for more than 4,000 attacks in 2011. Central tenets of the new policy include enhanced training, increased sharing of information and expertise, and “effectively exploiting information and materials from IED attacks.” An interagency group called the Joint Program Office for Countering IEDs, to be administered through the FBI, has been created to coordinate and track implementation of the goals spelled out in the White House policy statement. “The threat from IED use is likely to remain high in the near future, and will continue to evolve in response to our abilities to counter them,” the statement concludes. Steve Diaczyszyn, head of the FBI’s Hazardous Devices School, which trains and certifies 1,500 bomb techs a year, echoed the urgent necessity of staying current. “It’s a rapidly evolving profession,” he said.

Tracking the money trails to expose extremists and their networks of supporters.

How a Mexican drug cartel leader used an Oklahoma horse farm to launder millions in illicit.