Latent Hit of the Year Award 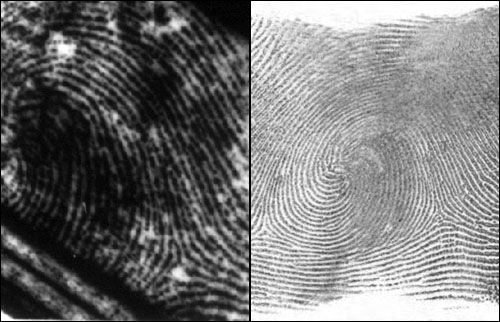 The latent print on the left was taken from a store catalog found at the scene of a 1999 murder of a jeweler. On the right is the fingerprint from IAFIS matched to the latent print by a San Bernardino County Sheriff’s Department fingerprint examiner.

In September 2001, a California sheriff’s department linked up electronically with the FBI’s Integrated Automated Fingerprint Identification System, or IAFIS, through the California Department of Justice. To test the system, the department selected as its inaugural submission a latent print found at the crime scene of an unsolved 1999 murder. IAFIS returned several possible matches, and subsequent investigation led to the arrest and guilty plea of the man responsible.

And three key individuals involved in this case were recently selected for the 2013 Latent “Hit of the Year” Award, given annually by our Criminal Justice Information Services Division to latent print examiners and law enforcement officers for their efforts to solve major crimes using IAFIS latent print services.

How the investigation began. On December 2, 1999, the San Bernardino Police Department responded to a call regarding an unresponsive male on the floor of a jewelry store. The victim was identified as 74-year-old Marshall Adams, a well known jeweler who worked for 25 years as a teacher before opening his own store.

San Bernardino Police detective John Munoz headed the investigation, with assistance from the Scientific Investigations Division of the San Bernardino County Sheriff’s Department. Identification technicians—including Randy Beasley—collected latent fingerprints, palmprints, and blood evidence obtained from a knife, doors, and a store catalog. Beasley also discovered a bloody palmprint on the victim’s face. Adams had been brutally beaten and stabbed, and his wallet and several pieces of display case jewelry were missing.

The sheriff’s department processed the crime scene evidence and searched all latent prints against their own databases. One possible suspect was identified but then cleared. With no other leads, the case went cold.

IAFIS proves its mettle. Then, in September 2001, the San Bernardino County Sheriff’s Department joined the IAFIS network and sent in a fingerprint from the Adams case—specifically, a latent print taken from a jewelry catalog. Shortly thereafter, IAFIS responded with a list of possible candidates. Supervising fingerprint examiner James Nursall concluded that the latent print evidence was a match to one of the candidates—Jad Salem—who, according to IAFIS, had been arrested in Texas two weeks after Adams’ murder. He had been stopped for a traffic violation but was then arrested on a drug charge, and Texas authorities entered Salem’s prints into IAFIS.

Detective Munoz located Salem in San Bernardino. After being advised of the fingerprint evidence against him, Salem agreed to provide his fingerprints and palmprints for comparison against latent evidence collected from the crime scene. Fingerprint examiner Nursall concluded that Salem’s prints matched the latent prints found on the jewelry store door and on the victim’s face.

Salem was arrested and charged with Adams’ murder. During an interview, Salem admitted being at the crime scene but claimed to have only been a witness. He could not, however, explain how his palmprint left a bloody impression on the victim’s face. And according to courtroom proceedings, Salem and Adams had met several times to discuss the purchase of an engagement ring.

In the face of this overwhelming evidence, Salem pled guilty and was sentenced to 32 years in prison. Proof positive of the key role that technology can play in identifying dangerous criminals and bringing them to justice. What Are Latent Prints?

Latent prints are impressions—usually invisible to the naked eye—produced by the ridged skin on human fingers, palms, and soles of the feet; they are often left at crime scenes. A variety of techniques—including the use of chemicals, powders, lasers, and alternate light sources—are employed in the detection and development of latent prints. These prints are then routinely processed through local and state fingerprint databases to find a match. But if those searches come up empty, the prints can also be submitted to the FBI’s Integrated Automated Fingerprint Identification System (IAFIS).

Congratulations to the following individuals for their key roles in solving the 1999 murder of a San Bernardino, California jeweler…with help from the latent capabilities of the FBI’s Integrated Automated Fingerprint Identification System (IAFIS):

- Randolph B. Beasley, currently retired from the San Bernardino County Sheriff’s Department (Crime Laboratory, Scientific Investigations Division) after 30 years of service. Certified by the International Association for Identification as a senior crime scene analyst and bloodstain pattern examiner, he has processed hundreds of homicide and other major cases—including officer-involved shootings—during his career.

- James Edward Nursall, a supervising fingerprint examiner with the San Bernardino County Sheriff’s Department’s Latent Print Section. He began his career in 1992 as a patrol station mechanic and was later promoted to the Tenprint and Latent Units. Nursall is certified by the International Association for Identification as a latent print examiner.

- John P. Munoz, a homicide detective with the San Bernardino Police Department. He has investigated hundreds of homicide cases and has assisted the district attorney with the prosecution of numerous violent and high-profile murder suspects. He began his law enforcement career as a patrol officer in 1979, and later moved to the Multiple Enforcement Team—responsible for high-crime areas—that eventually become the department’s first Gang Unit.

The FBI has posted pictures and information about 28 rare maps and books in the hopes that the individuals or institutions who own them will come forward to claim them.

Tracking the money trails to expose extremists and their networks of supporters.