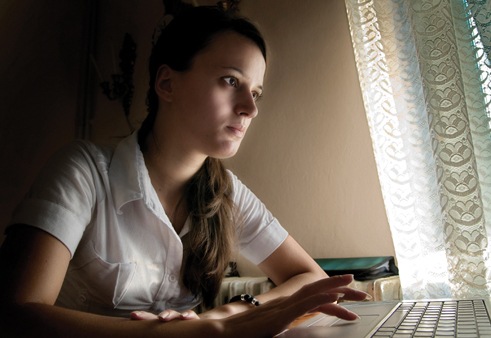 After a multi-agency state and federal investigation, all five defendants pled guilty to various federal charges related to the sex trafficking conspiracy. The leader of the gang—27-year-old Justin Strom—was just sentenced on September 14 to 40 years in prison, while the sentences handed down for the other four defendants totaled 53 years.

Strom headed up the Underground Gangster Crips (UGC), a Crips “set” based in Fairfax, Virginia. The Crips originated in Los Angeles in the late 1960s and early 1970s, and since then, the gang has splintered into various groups around the country. Law enforcement has seen a number of Crips sets in the U.S. engaging in sex trafficking as a means of making money.

Talk to your kids about the dangers of being sexually exploited online and offline.

Make sure your kids’ privacy settings are high, but also keep in mind that information can inadvertently be leaked by friends and family…so kids should still be careful about posting certain information about themselves—like street address, phone number, Social Security number, etc.

Be aware of who your kids’ online friends are, and advise them to accept friend requests only from people they know personally.

Know that teens are not always honest about what they are doing online. Some will let their parents “friend” them, for example, but will then establish another space online that is hidden from their parents.

Teens sometimes employ an “Internet language” to use when parents are nearby. For example:
- PAW or PRW: Parents are watching
- PIR: Parents in room
- POS: Parent over shoulder
- LMIRL: Let’s meet in real life

That’s certainly what was happening in Virginia. Strom and his UGC associates would troll social networking sites, looking for attractive young girls. After identifying a potential victim, they would contact her online using phony identities...complimenting her on her looks, asking to get to know her better, sometimes offering her the opportunity to make money as a result of her looks.

If the victim expressed interest (and many did, being young and easily flattered by the attention), Strom or one of his associates would ask for her cell phone number to contact her offline and make plans to meet.

After some more flattery about their attractiveness, sometimes hits of illegal drugs and alcohol, and even mandatory sexual “tryouts” with Strom and other gang members, the girls were lured into engaging in commercial sex, often with the help of more senior girls showing them the ropes. The girls might be sent to an apartment complex with instructions to knock on doors looking for potential customers…or driven to hotels for pre-arranged meetings…or taken to Strom’s house, where he allowed paying customers to have sex with them.

Some of the juvenile victims were threatened with violence if they didn’t perform as directed, and many were given drugs or alcohol to keep them sedated and compliant.

Strom and his associates did not discriminate—their victims were from across the socioeconomic spectrum and represented different ethnic backgrounds.

The FBI’s Washington Field Office worked the investigation alongside the Fairfax County Police Department, with the assistance of the Northern Virginia Human Trafficking Task Force.

After the group’s indictment in March 2012, then-Special Agent in Charge Ronald Hosko of our Washington Field Office reiterated the importance of working with our partners and community groups in combating these types of despicable crimes. He also said, “Trafficking in humans, especially for the purpose of underage prostitution, is among the most insidious of crimes…and the FBI will leave no stone unturned in our efforts to track down those who exploit our children and engage in human trafficking.”

An oil painting by French Impressionist Pierre Auguste Renoir stolen from a Houston home last year—and estimated to be worth $1 million—is the newest addition to the FBI’s Top Ten Art Crimes list.