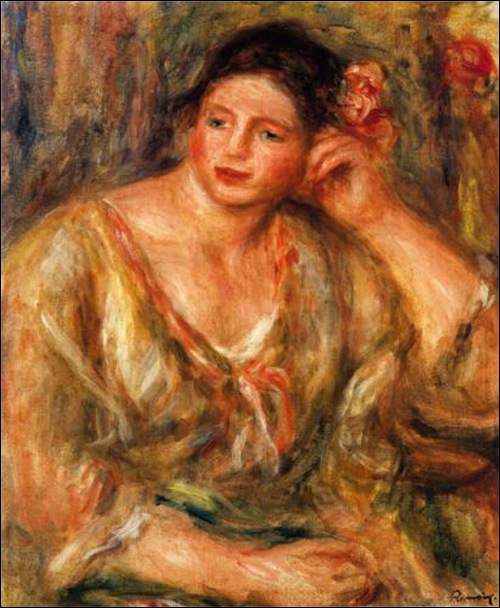 An oil painting by French Impressionist Pierre Auguste Renoir stolen from a Houston home last year—and estimated to be worth $1 million—is the newest addition to the FBI’s Top Ten Art Crimes list.

The painting, Madeleine Leaning on Her Elbow with Flowers in Her Hair (pictured left), was stolen during an armed robbery on September 8, 2011. The homeowner was watching television when she heard a loud noise downstairs. When she went to investigate, she was confronted by an armed man in a ski mask.

“We hope that adding the Renoir to the FBI’s Top Ten list and publicizing the reward of up to $50,000 for information leading to the recovery of the painting will prompt someone to come forward,” said Peter Schneider, a sergeant with the Houston Police Department who is a member of the FBI’s Violent Crimes Task Force in Houston.

Information about the painting has been included in the FBI’s National Stolen Art File, as well as other similar online tools—including the Art Loss Register and INTERPOL’s Works of Art database—that alert art dealers, gallery owners, and auction houses about missing and stolen artwork.

“If the thief tries to place the painting with a reputable dealer or gallery, or tries to sell it at auction, members of the art community here and overseas who regularly check these databases will see that the artwork has been stolen and will alert the FBI,” said Bonnie Magness-Gardiner, who manages the Bureau’s art theft program. “Our goal is to provide information about this theft to the widest audience possible,” she said.

Renoir, a master Impressionist, painted Madeleine Leaning on Her Elbow with Flowers in Her Hair in 1918. The canvas size is 50.17 x 41.28 centimeters, and the artist signed the oil portrait in the lower right corner. The painting was taken with its frame intact from the stairwell where it hung.

The masked robber, who forced entry through the back door of the home, is described as a white male, 18 to 26 years old, who weighs about 160 pounds and is approximately 5’10” tall. He was armed with a large-caliber, semi-automatic handgun.

Sgt. Schneider said that while Houston has had its share of art crimes, few have been as high-profile as the theft of the Renoir. He added that the thief would likely try to sell the painting in a larger art community like New York or Los Angeles, or possibly overseas.

The FBI established the Top Ten Art Crimes list in 2005. Since then, six paintings and one sculpture have been recovered, including a Rembrandt self-portrait and another Renoir work titled Young Parisian stolen from Sweden’s National Museum. The current list may be found on our art theft program page listed below.

We need your help: Anyone with information about the stolen Renoir is encouraged to contact their local FBI office or the nearest U.S. Embassy or Consulate, or to submit a tip online at https://tips.fbi.gov. A private insurer is offering up to $50,000 for information leading to the recovery of the painting.

They’ve played the part of everyone from a college student to a CEO…created and run entire fictitious companies…attended motorcycle gang weddings…even been “arrested” for the good of the cause.