Stolen Ruby Slippers from The Wizard of Oz Recovered 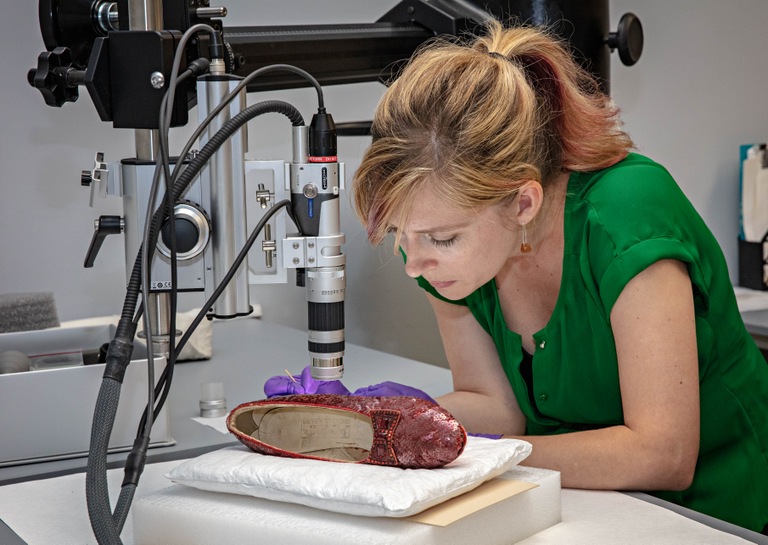 Dawn Wallace, a conservator for the Smithsonian Institution's National Museum of American History, analyzes one of the recovered slippers at the Smithsonian's Conservation Lab in Washington, D.C. (Smithsonian photo)

A pair of ruby slippers worn by Judy Garland in the 1939 film The Wizard of Oz and stolen from the actress’ namesake museum in Minnesota more than a decade ago has been recovered, the FBI announced today.

The iconic sequined shoes, known as the “traveling pair”—one of at least four pairs used in the film that are still in existence—were stolen from the Judy Garland Museum in Grand Rapids in 2005 and recovered earlier this summer during a sting operation. But the case is far from over.

“From the outset,” said Special Agent Christopher Dudley, who led the investigation from the FBI’s Minneapolis Field Office, “our top priority was the safe recovery of the slippers.” Although multiple suspects have been identified, Dudley said, “we are still working to ensure that we have identified all parties involved in both the initial theft and the more recent extortion attempt for their return. This is very much an active investigation.”

At a press conference in Minneapolis to announce the recovery, the FBI, along with the Grand Rapids Police Department, asked for the public’s assistance. “There are certainly people out there who have additional knowledge regarding both the theft and the individuals responsible for concealing the slippers all these years.” Dudley said. “We are asking that you come forward.”

Conservators at the National Museum of American History assisted the Minneapolis Division of the FBI in the case of ruby slippers from The Wizard of Oz that were stolen in Minnesota in 2005. The museum analyzed and compared the recovered slippers with a pair that has been part of the Smithsonian collection since 1979.

“We are still working to ensure that we have identified all parties involved in both the initial theft and the more recent extortion attempt for their return.”

Judy Garland, who played Dorothy Gale in the classic fairy tale film enjoyed by generations of moviegoers around the world, wore several pairs of the red slippers during the movie’s production, dancing her way down the yellow brick road and, at the story’s end, clicking her heels three times and repeating, “There’s no place like home.” The slippers are widely considered to be one of the most recognizable pieces of memorabilia in American film history and are estimated to be worth several million dollars.

The star’s childhood house in Grand Rapids was turned into a museum in 1975 and remains a repository of The Wizard of Oz artifacts and memorabilia. The slippers disappeared from there in the early morning hours of August 28, 2005, and the crime has weighed heavily on the community, whose identity is proudly associated with Garland’s birthplace.

Despite a vigorous investigation by local authorities at the time, the slippers were not located, and no arrests were made. When the theft occurred, said Grand Rapids Police Department Chief Scott Johnson during today’s announcement, “the thieves not only took the slippers, they took a piece of history that will be forever connected to Grand Rapids and one of our city’s most famous children.”

In the summer of 2017, 12 years after the theft, an individual approached the company that insured the slippers, saying he had information about the shoes and how they could be returned. “When it became apparent that those involved were in reality attempting to extort the owners of the slippers,” Dudley explained, Grand Rapids police requested the FBI’s assistance. After nearly a yearlong investigation—with invaluable assistance from the FBI’s Art Crime Team, the FBI Laboratory, and field offices in Chicago, Atlanta, and Miami—the slippers were recovered during an undercover operation in Minneapolis. 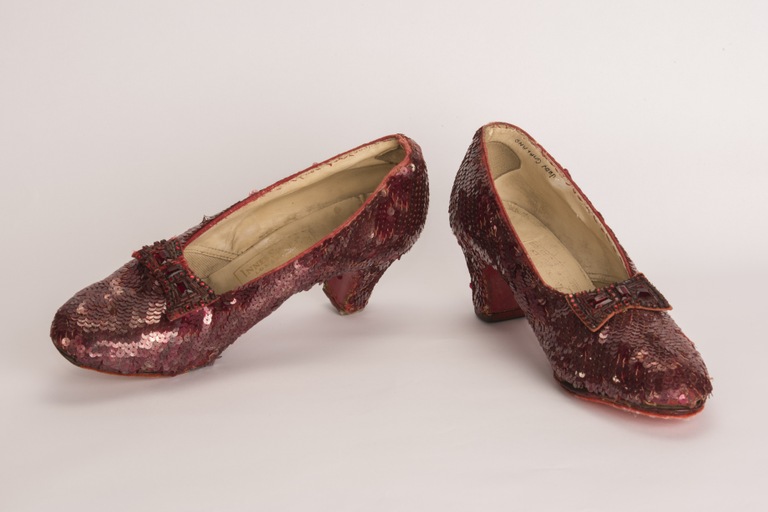 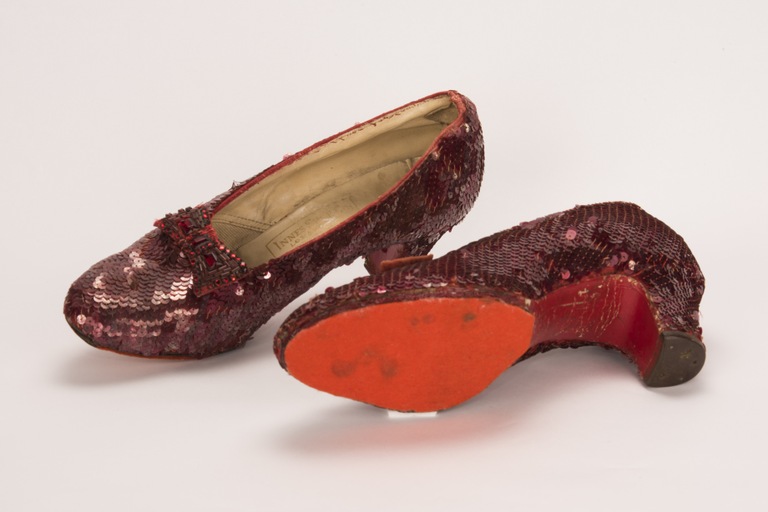 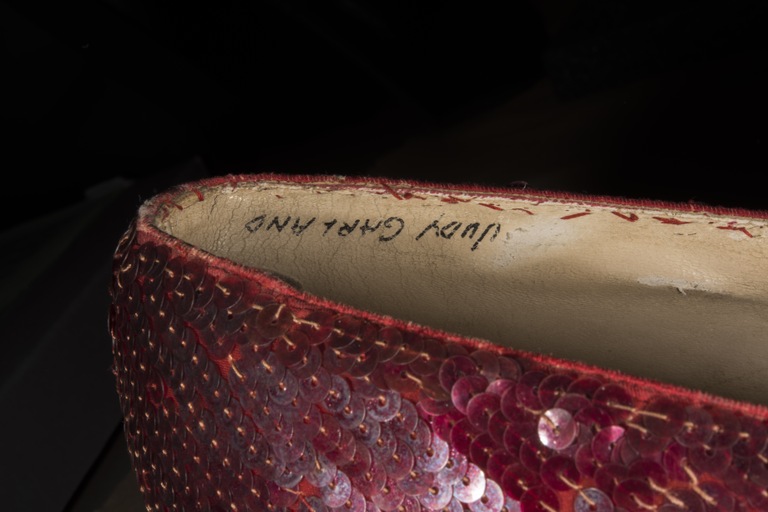 These iconic sequined shoes, known as the “traveling pair”—one of at least four pairs used in The Wizard of Oz that are still in existence—were stolen from the Judy Garland Museum in Grand Rapids, Minnesota in 2005 and recovered earlier this summer during a sting operation.

Agents from the FBI’s Minneapolis Field Office transported the recovered slippers to the Smithsonian Institution’s National Museum of American History in Washington, D.C.—where another pair of the ruby slippers has been on display since 1979—for analysis and comparison.

Smithsonian curator Ryan Lintelman, who specializes in American film history, explained that there were probably six or more pairs of the slippers made for The Wizard of Oz. “It was common that you would create multiple copies of costumes and props,” he said. Somehow over the years, the pairs of shoes were mixed up.

Lintelman added that the Smithsonian’s ruby slippers “are among the most requested objects by visitors to the museum. There is an emotional response that visitors have,” he said. “People’s eyes light up.”

“Recovering a cultural item of this importance is significant,” the FBI’s Dudley noted. “So many people of all ages around the world have seen The Wizard of Oz and in that way have some connection to the slippers. That’s one of the things that makes this case resonate with so many.”

Anyone with additional information regarding the theft of the ruby slippers or the extortion plot is encouraged to contact the FBI at 1-800-CALL-FBI (225-5324) or submit information online at tips.fbi.gov.

The FBI’s Safe Online Surfing (SOS) Internet Challenge, designed for third- through eighth-grade students, has opened for the 2018-19 school year and is now available in Spanish.

A Florida man was recently sentenced to a federal prison term for a civil rights violation after threatening to burn down a home that a Muslim couple was planning to buy in his neighborhood.